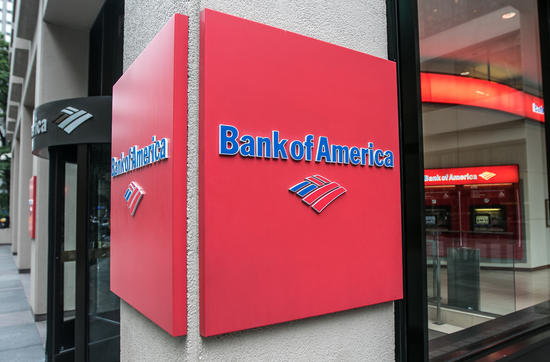 Before market opening on Jan. 15, Bank of America Corp. (

BAC, Financial) posted its earnings for the fourth quarter of 2019.

For the quarter, the bank posted revenue of $22.5 billion, net income of $7 billion and diluted earnings per share of 74 cents, beating analyst estimates, which predicted $22.35 billion in revenue and 68 cents in earnings per share.

As of Jan. 15, Bank of America has a market cap of $310.69 billion, a price-earnings ratio of 12.82% and a cash-debt ratio of 0.6. Its three-year revenue growth rate of 6.5% and three-year EPS without non-recurring items growth rate of 25.8% put it ahead of approximately 70% of competitors in the banking industry.

Shares are trading within cents of the opening price, not much affected by the news. According to the Peter Lynch chart below, as well as the Graham number of 34.3 (which is in line with the share price of around $34 to $35 as of the writing of this article), the stock is currently trading at or slightly below its fair value.

“The company managed well through a period of transition from rising rates to lower rates over a short period of time. Solid client activity in growing loans and gathering deposits helped us offset spread compression. We also are aided by diverse lines of business and operations, with noninterest income comprising nearly half of our revenue,” Chief Financial Officer Paul Donofrio said.

Consumer loans increased 6% during the quarter, while commercial loans increased 7%. The average loan balance to businesses rose 6% as well. Loan growth was higher in the U.S. than it was overseas (7% compared to 6%).

Growth in wealth and investment management also contributed to profits, with total client balances under management surpassing $3 trillion, a 16% increase. The number of new households invested in private banking was up 64% for the full year, while Merill Lynch grew 25%.

Despite analyst predictions that Bank of America was likely to miss earnings estimates thanks to the negative effect of lower interest rates on trading, the bank posted a net increase in sales and trading revenue of 13%. Fixed income, currencies and commodities increased by 25% to $1.8 billion, surpassing a 4% equities loss to $1 billion. Average trading-related assets increased to $483.9 billion, compared to $464 billion at the end of 2018.

The positive news for the quarter and year was tempered by downbeat forecasts for 2020. On the bank’s conference call, it said that net interest income would likely continue to fall in the first half of the year after declining 3% in 2019. In 2019, the bank still benefitted from higher interest rates at the beginning of the year, as interest rate changes don’t show their full affect for months, when loan payments become due. However, we are entering 2020 with interest rates that have been cut three times in the past year, so the full effects of that will be felt in the coming year.

Disclosure: Author owns no shares in any of the stocks mentioned. The mention of stocks in this article does not at any point constitute an investment recommendation. Investors should always conduct their own careful analysis or consult registered investment advisors before taking action in the stock market.