Galway Metals Intersects 6.3 g/t Au Over 30.0 Metres, Hits VG in a 230m Stepout, and Discovers a New Zone with VG, all at the GMZ at Clarence Stream

"Galway is rapidly expanding the George Murphy Zone in both vertical and horizontal dimensions. The structure containing 6.3 g/t Au over 30.0m was drilled up-plunge of known mineralization, towards surface, to enable it to become part of a pit-constrained resource estimate. The new discovery to the north contains strong quartz veining. New drilling to the west is intended to shrink what was an 800m gap between the Richard and GMZ. Galway is demonstrating that its interpretation that the Jubilee, Richard and George Murphy Zones, which cover 2.5 km of strike length, are part of the same system. These 3 zones are not included in the existing Clarence Stream resource, as two of them, the GMZ and Richard, were discovered by Galway after the last resource estimate was released in September 2017. These results, and those that precede them, demonstrate that Clarence Stream is an emerging new gold district in North America," cites Robert Hinchcliffe, President and CEO of Galway Metals.

Two new structures have also been discovered 75 metres and 135 metres north of the George Murphy Zone. Hole GWM20CL-58 intersected mineralization at 178.0m-193.5m, and at 257.9m-263.0m. Visible gold is present in one of the structures, which also contains 15-30% remobilized quartz veining with 1% arsenopyrite and 5% pyrite. Assays are pending. (Figure 1, Figure 2 and Figure 3)

The George Murphy Zone is Filling in and Expanding:

Northern-Most Structure is Expanding Toward Surface

The gold bearing structures at the GMZ have been drilled to a maximum depth of 265m vertical, although most drilling is from near surface to only 130m. The GMZ is 500m long (without hole 88, which contains VG in 3 places that would extend the Zone up to 230m west), with multiple structures over 160m horizontal thickness, and with all zones open in every direction.

Come and see us at the PDAC!

Galway management will be attending this year's PDAC Conference in Toronto. Core of VG from Clarence Stream and core from Estrades/Newiska will be on display at Galway's PDAC Booth #2623A on Sunday and Monday, March 1st and 2nd. Management will also be participating in the PDAC One-On-One meeting program on March 3rd and 4th. For more information please click on the link: One-on-One Meetings at PDAC.

Galway would like to acknowledge financial support from the New Brunswick Junior Mining Assistance Program, which partially funded drilling of the GMZ, Jubilee, and Richard Zones.

The recent discovery of the Richard Zone in hole 12 contains elevated levels of bismuth, arsenopyrite, and antimony, in multiple quartz veins, with tungsten in the vicinity. This is similar to other Clarence Stream deposits, which can be characterized as intrusion-related quartz-vein hosted gold deposits. Richard Zone contains multiple zones of quartz veining with sulfides and sericite alteration. In general, mineralization at Clarence Stream consists of 10-70% quartz stockworks and veins with 1-5% fine pyrite plus pyrrhotite plus arsenopyrite plus stibnite in sericite altered sediments. The Jubilee mineralization consists of 2%-5% disseminated pyrite, sphalerite, galena, arsenopyrite, chalcopyrite, and pyrrhotite in sediments with white to smoky grey quartz veining. Locally there is up to 10% sphalerite and semi-massive galena veinlets. The 2.5 km trend that hosts the GMZ, Richard and Jubilee Zones contains a mineralized mafic intrusive locally - similar to the South Zone, which currently hosts most of the property's last reported gold resources (September 2017). A more complete description of Clarence Stream's geology and mineralization can be found at www.galwaymetalsinc.com.

Michael Sutton, P.Geo., Director and VP of Exploration for Galway Metals, is the Qualified Person who supervised the preparation of the scientific and technical disclosure in this news release on behalf of Galway Metals Inc. All core, chip/boulder samples, and soil samples are assayed by Activation Laboratories, 41 Bittern Street, Ancaster, Ontario, Canada, who have ISO/IEC 17025 accreditation. All core is under watch from the drill site to the core processing facility. All samples are assayed for gold by Fire Assay, with gravimetric finish, and other elements assayed using ICP. The Company's QA/QC program includes the regular insertion of blanks and standards into the sample shipments, as well as instructions for duplication. Standards, blanks and duplicates are inserted at one per 20 samples. Approximately five percent (5%) of the pulps and rejects are sent for check assaying at a second lab with the results averaged and intersections updated when received. Core recovery in the mineralized zones has averaged 99%.

For results of all holes that Galway has drilled at Clarence Stream, go to Galway's website at www.galwaymetalsinc.com. 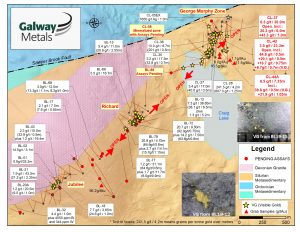 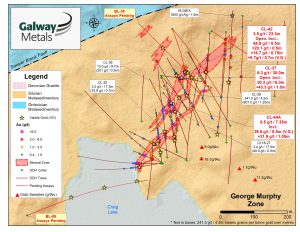 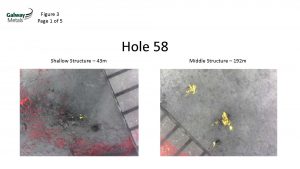 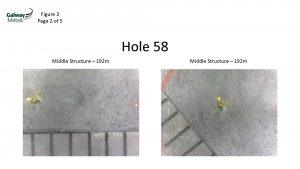 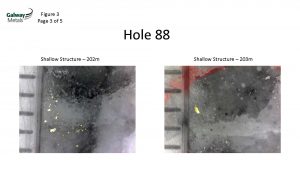 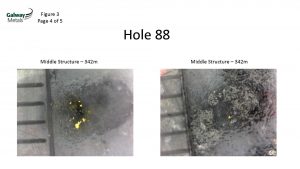 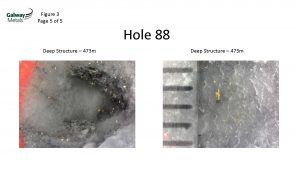 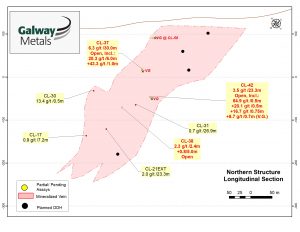 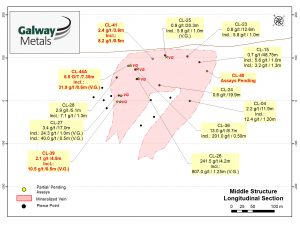 Galway Metals is well capitalized with two gold projects in Canada, Clarence Stream, an emerging gold district in New Brunswick, and Estrades, the former producing, high-grade VMS mine in Quebec. The Company began trading on January 4, 2013, after the successful spinout to existing shareholders from Galway Resources following the completion of the US$340 million sale of that company. With substantially the same management team and Board of Directors, Galway Metals is keenly intent on creating similar value as it had with Galway Resources.

Should you have any questions and for further information, please contact (toll free):

CAUTIONARY STATEMENT: Neither the TSX Venture Exchange nor its Regulation Services Provider (as that term is defined in the policies of the TSX Venture Exchange) accepts responsibility for the adequacy of this news release. No stock exchange, securities commission or other regulatory authority has approved or disapproved the information contained herein.

This news release contains forward-looking information which is not comprised of historical facts. Forward-looking information involves risks, uncertainties and other factors that could cause actual events, results, performance, prospects and opportunities to differ materially from those expressed or implied by such forward-looking information. Forward-looking information in this news release includes statements made herein with respect to, among other things, the Company's objectives, goals or future plans, potential corporate and/or property acquisitions, exploration results, potential mineralization, exploration and mine development plans, timing of the commencement of operations, and estimates of market conditions. Factors that could cause actual results to differ materially from such forward-looking information include, but are not limited to, exploration results being less favourable than anticipated, capital and operating costs varying significantly from estimates, delays in obtaining or failures to obtain required governmental, environmental or other project approvals, political risks, uncertainties relating to the availability and costs of financing needed in the future, changes in equity markets, inflation, changes in exchange rates, fluctuations in commodity prices, delays in the development of projects, risks associated with the defence of legal proceedings and other risks involved in the mineral exploration and development industry, as well as those risks set out in the Company's public disclosure documents filed on SEDAR. Although the Company believes that management's assumptions used to develop the forward-looking information in this news release are reasonable, including that, among other things, the Company will be able to identify and execute on opportunities to acquire mineral properties, exploration results will be consistent with management's expectations, financing will be available to the Company on favourable terms when required, commodity prices and foreign exchange rates will remain relatively stable, and the Company will be successful in the outcome of legal proceedings, undue reliance should not be placed on such information, which only applies as of the date of this news release, and no assurance can be given that such events will occur in the disclosed time frames or at all. The Company disclaims any intention or obligation to update or revise any forward-looking information contained herein, whether as a result of new information, future events or otherwise, except as required by applicable securities laws.