The company closed out 2020 with an excellent quarter. 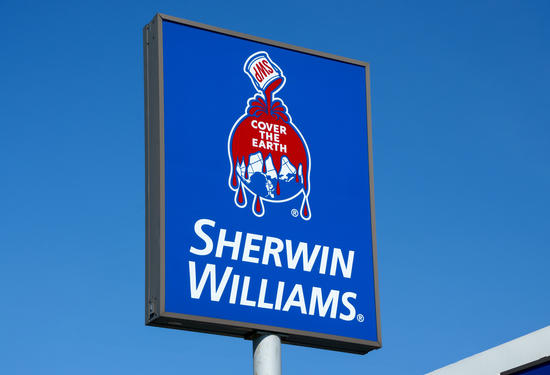 SHW, Financial) reported fourth-quarter and full-year earnings results on Jan. 28. Revenue for the quarter improved 9.1% to $4.5 billion, which was $148 million higher than Wall Street analysts had expected. Adjusted earnings per share improved 82 cents, or 19.2%, to $5.09, which was 23 cents above estimates.

For the year, revenue increased 2.6% to a record $18.4 billion. Adjusted earnings per share of $24.58 was a 16.4% improvement from the previous year and 43 cents above the midpoint of Sherwin-Williams' guidance given at the conclusion of the third-quarter.

All areas of the company reported growth in the quarter.

The Americas Group experienced an acceleration of growth from the previous quarter, with sales higher by 9% to $2.58 billion. Same-store sales for the largest component of Sherwin-Williams were up 9.3% due to strength in the do-it-yourself, residential repaint and new residential channels. Commercial and property management was up slightly, but exterior paint, interior paint and spray equipment were up double-digits. The segment margin improved 270 basis points to 21.7%.

Revenue for Consumer Brands Group were 13.6% higher at $613 million. As with the Americas Group, growth in DIY was especially robust. Gains in this channel were partially offset by slower growth in Europe and a decline in Asia. North American retail was the real driver for this segment, posting a double-digit increase from the prior year. Better volumes and an improvement in profitability for international markets led an adjusted segment margin of 13.6%, a 280-basis point improvement

Consumer Brand turned in an excellent second half of 2020 as fourth-quarter results were proceeded by a 23.5% increase in revenue in the third quarter. This was a marked improvement from the first half of the year as the segment fell by a double-digit percentage. Undoubtedly, this segment benefited from stimulus checks distributed during 2020 as consumers focused on home improvement while under various stages of social distancing restrictions.

Revenue of $1.3 billion for the Performance Coatings Group was a 7.3% increase from the prior year. All geographic regions and businesses performed well. Double-digit growth was seen in Asia, Europe and Latin America while North America was up low single digits. The best-performing businesses were coil, industrial wood and packaging. Automotive was up slightly despite the headwind of fewer miles driven related to the Covid-19 pandemic. The adjusted segment margin grew 100 basis points to 14.4%.

Gross margins expanded 140 basis points to 47.4% in the fourth quarter due to a combination of higher sales, better mix and lower input costs.

All segments of Sherwin-Williams produced higher sales for the year as well, with the Americas Group up by 9%, Consumer Brands Group improving 13.6% and Performance Coatings Group growing 7.3%. These numbers look even better considering much of the company's business was weak in the first half of 2020.

Sherwin-Williams' balance sheet appears to be in great shape. The company ended 2020 with total assets of $20.4 billion, including current assets of $4.6 billion and cash and cash equivalents of $227 million. Inventories of $1.8 billion were in line with the prior year's levels, showing that Sherwin-Williams is carrying enough product to meet demand. The company had total liabilities of $16.8 billion, including current liabilities of $4.6 billion. Total debt was $10.1 billion, but just $25 million of debt due in 2021. Debt maturities over the next few years are very manageable. The company has $660 million due in 2022, nothing due in 2023, $500 million due in 2024 and $650 million due in 2025.

The company generated operating cash of $3.4 billion, distributed $488 million of dividends and repurchased 3.9 million shares of stock at an average price of $618 during the year.

Sherwin-Williams provided guidance for 2021 as well. Adjusted earnings per share is projected in a range of $26.40 to $27.20, which would be a 9% growth at the midpoint. Guidance for the year implies a growth rate that is solid, but below the five- and 10-year compound annual growth rates of 15.4% and 19.5%, respectively. This growth is coming off a fairly high base from the previous year, so I am not too worried about a slight deacceleration in bottom-line growth.

Beyond turning in an excellent fourth-quarter and full year, Sherwin-Williams has long been an extremely shareholder-friendly company. The company has reduced its share count by an average of 1.2% since 2011. Sherwin-Williams announced on Feb. 17 that it was adding an additional 15 million shares to its current share repurchase authorization. This represents more than 16% of the outstanding share count and would result in the retiring of more stock than what occurred from the 2011 to 2020 time period.

At the same time, Sherwin-Williams announced that it was increasing its dividend by 23.1% for the upcoming March 12 distribution date. The company has now increased its dividend for 43 consecutive years. Shares yield less than 1% at the moment, but the company has provided investors with a compound annual growth rate of almost 14% for its dividend over the last decade.

All of Sherwin-Williams' business segments closed out 2020 on a high note. Results for the year were higher even as the Covid-19 pandemic negatively impacted business during parts of the first half. This speaks volumes to Sherwin-Williams' ability to endure a tough economic environment and thrive.

Unfortunately for those who don't yet have a position in the name, the market is quite aware of the positives going for the company. Shares are up more than 25% over the last year and higher by 182% over the last five years. Both marks are significantly higher than the returns for the S&P 500 index during this periods of time.

With a current price of $720, Sherwin-Williams trades at 26.9 times 2021 earnings estimates, a premium to the price-earnings ratio of 22.2 that the stock has averaged since 2010.

Shares have a GF Value of $520.77. As presently priced, Sherwin-Williams trades with a price-to-GF Value of 1.38, earning a rating of significantly overvalued from GuruFocus.

However, Sherman-Williams' business strength and its shareholder returns, especially its dividend growth streak, remind me of another quality company in a different sector that has appeared overvalued for quite some time. As I wrote earlier this week when discussing Abbott Laboratories (

ABT, Financial), the price of doing business with a quality company is that the stock often appears overvalued.

Value investors are likely to eschew a name like Sherwin-Williams due to the valuation. Investors looking to partner with an excellent company that provides considerable shareholder returns, both in the stock price and through dividends and share repurchases, Sherwin-Williams is a worthy company to consider for purchase even if it trades with an elevated earnings multiple.

Disclosure: The author has a long position in Abbott Laboratories.