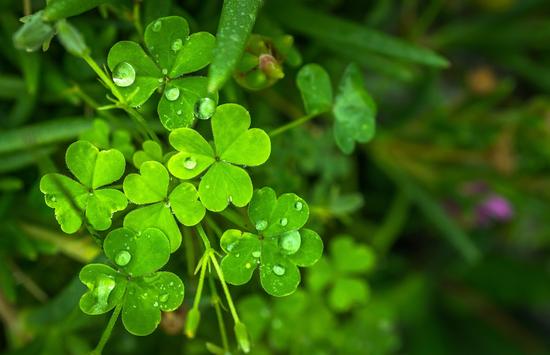 In observance of St. Patrick's Day, when everyone is Irish for a day, investors may be interested in trying their luck with companies headquartered on the Emerald Isle.

According to the National Retail Federation, American consumers will spend an average of $40.77 per person this year celebrating Ireland's favorite holiday. While the bulk of the total $5.1 billion will be spent on food and drinks, 30% of those surveyed said they will purchase green clothing so as to avoid being pinched.

The GF Values chart shows the stock is modestly overvalued currently based on historical ratios, past performance and future earnings projections.

GuruFocus rated the Dublin-based building materials company's financial strength 5 out of 10. Although the company has issued approximately $1.8 billion in new long-term debt over the past three years, it is at a manageable level due to sufficient interest coverage. The Altman Z-Score of 2.21, however, indicates the company is under some pressure since assets are building up at a faster rate than revenue is growing.

CRH's profitability scored a 6 out of 10 rating, driven by an expanding operating margin and returns that outperform around half of its industry peers. The company also has a moderate Piotroski F-Score of 6, indicating business conditions are stable, but due to revenue per share declining over the past 12 months, the one-star predictability rank is on watch. According to GuruFocus, companies with this rank return an average of 1.1% annually over a 10-year period.

Of the gurus invested in CRH,

The shipping and transport company, which services routes between Ireland, the U.K. and Continental Europe, was given a profitability rank of 5 out of 10 by GuruFocus. Due to issuing approximately 151.3 billion euros ($180.08 billion) in new long-term debt over the past three years, Irish Continental has poor interest coverage. Additionally, the Altman Z-Score of 2.63 indicates it is under some pressure as the return on invested capital is eclipsed by the weighted average cost of capital, indicating issues with creating value.

Irish Continental's profitability fared better, scoring a 7 out of 10 even though the operating margin is in decline and returns are underperforming a majority of industry peers. The company also has a moderate Piotroski F-Score of 5, but the one-star predictability rank is on watch as a result of revenue per share declining over the past several years.

GuruFocus rated the Irish building materials company's financial strength 6 out of 10. Although the company has issued approximately 926.3 million euros in new long-term debt over the past three years, it is still at a manageable level due to having adequate interest coverage. The robust Altman Z-Score of 4.77 indicates Kingspan is in good standing even though revenue per share had been in decline for the past year. The ROIC also surpasses the WACC, indicating good value creation.

Kingspan's profitability scored an 8 out of 10 rating, driven by an expanding operating margin, strong returns that outperform a majority of competitors and a moderate Piotroski F-Score of 5. It also has a five-star predictability rank. GuruFocus says companies with this rank return an average of 12.1% annually.

The Irish low-cost airline's financial strength was rated 4 out of 10 by GuruFocus. While the company's cash-to-debt ratio is outperforming versus other industry players, its Altman Z-Score of 1.66 suggests it is under some pressure.

The company's profitability fared better with an 8 out of 10 rating. In addition to a declining operating margin, Ryanair has negative returns that underperform a majority of industry peers and a low Piotroski F-Score of 2, which indicates business conditions are in poor shape. As a result of recording a slowdown in revenue growth, the three-star predictability rank is on watch. GuruFocus data shows companies with this rank see their stocks gain an average of 8.2% per year.