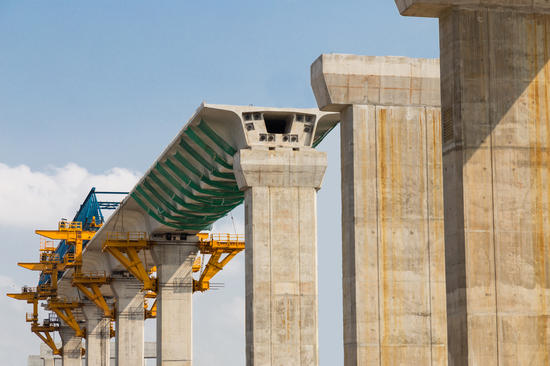 On March 31, President Joe Biden introduced a $2.25 trillion economic relief package under the American Jobs Plan, intending to create more jobs and revitalize the country's economy by spending on infrastructure development. An additional investment of $621 billion is to be made to modernize the transportation sector as well. Similar to all policy decisions, this new bill is likely to have an impact on many industries and, as investors, digging deep into the details of this plan seems to be the correct choice as it could be helpful in uncovering lucrative investment opportunities.

Summary of the American Jobs Plan

The bill states that 173,000 total highway miles and 45,000 bridges in the United States are in poor condition. The plan proposes spending $115 billion to upgrade roads, highways, bridges and main streets with a focus on limiting greenhouse gas emissions by reducing traffic congestion. In an attempt to reduce traffic further, $85 billion will be invested to improve public transit and rail services. The Biden administration also intends to expand the rail services to new cities.

The automobile industry will receive a $174 billion investment to encourage domestic production of electric vehicles. The government plans to build a national network of 500,000 EV chargers by 2030, replace 50,000 diesel transit vehicles, and expects to electrify at least 20% of yellow cabs in operation.

The bill also focuses on remodeling airports and ports to make the U.S. a global leader in clean freight and aviation. The modernization of infrastructure also includes a $100 billion investment in building high-speed and widely accessible broadband facilities. The government announcement also highlighted a plan to improve the operating conditions of hospitals, home care facilities and water-related infrastructure facilities. The illustration below shows the planned spending by category.

Which business sectors will benefit from the billion-dollar investments?

Several industries will benefit immensely from this new spending plan, but the biggest winners would be automakers, the renewable energy industry, construction companies, the manufacturing industry, pharmaceuticals and the trucking industry. The Biden administration is focused on achieving carbon neutrality by 2050, and the electric vehicle industry will play an important role in helping policymakers achieving this objective. Therefore, the EV industry deserves to be monitored closely to identify potential winners.

Electrifying the transport industry is a major step toward reaching the net-zero emissions goal. With China leading the EV market globally, the U.S. government is providing incentives to spur the domestic production and consumption of these vehicles. Even though this industry was hit hard initially as a result of the shutdown of manufacturing plants in early 2020, it recovered quickly and Wall Street analysts expect to see five-fold growth in the EV market through 2025 as a result of favorable macroeconomic conditions and the new administration's plan to boost the adoption of electric vehicles in federal fleets.

The construction sector will be another big winner of the newly announced spending plan. This business segment suffered massive losses in the first half of 2020 as a result of the lockdown and global supply chain disruptions. The proposed investments will trigger a new era of growth for this sector, and contrarian investors are likely to find undervalued bets in this space.

Two undercovered companies to look out for

CHPT, Financial) owns and operates one of the largest electric vehicle charging networks in the world. The company is well positioned to benefit from the decision to expand the availability of EV charging stations in the United States. According to Bloomberg, electric vehicle sales will increase to 26 million units in 2030 from just 3 million in 2020, which suggests exponential growth is on the cards for the industry.

In 2020, Chargepoint reported revenue of $146.5 million, a 1% increase from 2019. The company has an impressive business model that combines network hardware, software subscriptions and other professional services to cater to the surging demand for EV charging facilities. The company is planning an expansion into Europe as well, which could be a catalyst for growth given that it is one of the fastest-growing EV markets alongside China.

An important factor that makes Nucor interesting is that the company has a very strong track record of dividend distributions that date back to 1989. The company continues to incur significant capital expenditures to strengthen its manufacturing capabilities, and Nucor has the strongest credit rating in the North American steel sector. The strong recovery expected from the American economy coupled with the newly announced investments in infrastructure development projects should help Nucor grow its earnings in the coming years.

Nucor shares are trading at a forward earnings multiple of 8.99 in comparison to the materials sector's average of 16.75, which suggests the stock is significantly undervalued relative to its peers.

The U.S. is behind many of its peers, including China, when it comes to infrastructure development spending. In a bid to turn things around, the new administration has proposed a $2 trillion investment bill with a view of creating millions of jobs while improving public infrastructure. Many sectors will directly benefit from these new investments, and opportunistic investors should look for companies that are well positioned to drive earnings growth with the support of government spending.

To fund these investments, the federal government plans to raise the corporate tax rate from 21% to 28% in the future, which is likely to be a drag on corporate earnings. This expected increase in taxes makes a strong case for investing in companies that will benefit from the American Jobs Plan as the planned investments will offset some of the negative impacts that will be created by tax hikes.

Disclosure: The author does now own any stocks mentioned in this article.