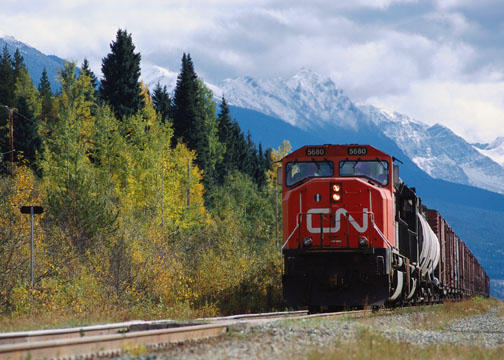 CP, Financial) made a deal with Kansas City Southern (KSU, Financial) to combine, Canadian National Railway Co. (CNI, Financial) threw its hat into the ring with a $33.7 billion bid on Tuesday.

The offer, which equates to $325 per share, is a 26.8% premium to Kansas City Southern's closing price on Monday and trumps the Calgary, Alberta-based company's $25 billion cash-and-stock deal.

According to the specific terms of Canadian National's offer, it will pay $200 in cash and 1.059 shares of its common stock per share to shareholders of the Kansas City-based railroad operator. The previous bid from Canadian Pacific, which valued the company at $275 per share, consisted of 0.489 shares and $90 in cash for each share held.

In a statement, Robert Pace, the chairman of the Montreal-based company's board, made a case for why this new offer is more appealing.

"We firmly believe our proposal is far superior to KCS' existing agreement with CP because it offers superior financial value over the immediate and long-term, a more complementary strategic fit, greater choice and efficiencies for customers and enhanced benefits for employees and local communities," he said. "We look forward to engaging constructively with KCS' Board and all relevant stakeholders to deliver this superior transaction."

Either combination will create the largest North American railway network, connecting the U.S., Canada and Mexico. As trade between these three countries is projected to increase following the implementation of the U.S.-Mexico-Canada pact in July 2020 and supply chains that were disrupted by the Covid-19 pandemic begin to recover, customers in the grain, automotive, auto parts, energy and intermodal markets, among others, stand to benefit.

Both deals also offer environmental advantages as goods transported by trucks will be shifted to rail, thereby reducing emissions.

"CN and KCS have highly complementary networks with limited overlap that will enable them to accelerate growth in single-owner, single-operator, end-to-end service across North America," he said. "With safer service and better fuel efficiency on key routes from Mexico through the heartland of America, the result will be a safer, faster, cleaner and stronger railway."

Canadian National noted its offer does not require shareholders' approval, eliminating a condition of Canadian Pacific's offer, thereby providing greater certainty that the deal will close.

It also said it will complete the combination without waiting for regulatory approval through a voting trust structure and pay out Kansas City Southern's shareholders. If rejected by regulators, Canadian National will then sell off or publicly list the railroad company.

Kansas City Southern has yet to respond to the new proposal.

According to GuruFocus' Industry Overview, Kansas City Southern is the 10th-largest player in the U.S. transportation sector, while Canadian National and Canadian Pacific are the two largest in Canada.

Not a Premium Member of GuruFocus? Sign up for a free 7-day trial here.
Rating: 4 / 5 (2 votes)
Write for GuruFocus
Submit an article
How to use GuruFocus - Tutorials What Is in the GuruFocus Premium Membership? A DIY Guide on How to Invest Using Guru Strategies GuruFocus New Features