Firm's largest new positons were in Verizon Communications and Zynga 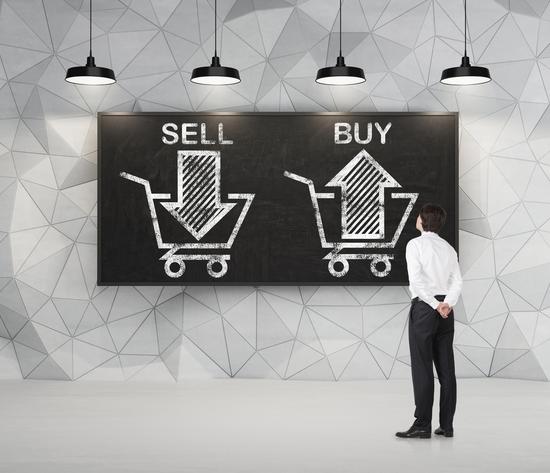 The Columbus, Ohio-based firm, which was founded in 2000, seeks to align employee interests with those of its investors by investing in the same portfolios. Its strategy to maintain a long-term focus is based on fundamental, ground-up analysis of a company's intrinsic value, as determined by factors such as market position, competition, management, valuation and growth prospects. The firm also focuses on buying undervalued companies that have a solid and proven foundation for revenue production.

Based on these criteria, the firm established five new positions during the quarter, sold out of eight stocks and added to or reduced a slew of other existing holdings. Notable trades included new stakes in Verizon Communications Inc. (

VZ, Financial), allocating 0.98% of the equity portfolio to the stake. The stock traded for an average price of $56.40 per share during the quarter. 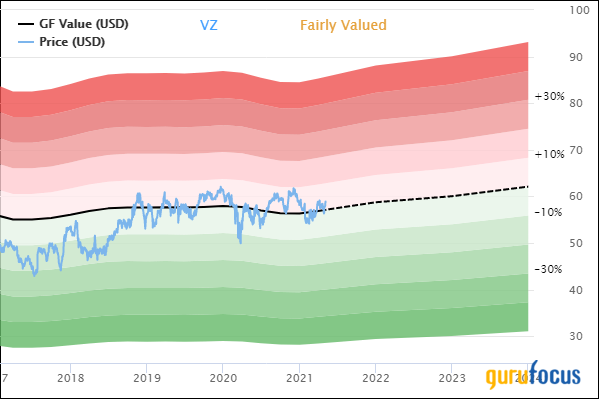 The valuation rank of 5 out of 10 aligns with this assessment since the share price and price ratios, with the exception of the price-earnings ratio, are approaching multiyear highs.

GuruFocus rated Verizon's financial strength 3 out of 10. Although the company has issued approximately $36.5 billion in new long-term debt over the past three years, it is at a manageable level due to having sufficient interest coverage. The Altman Z-Score of 1.44, however, warns that the company could be at risk of bankruptcy if it does not improve its liquidity. The return on invested capital surpasses the weighted average cost of capital, though, indicating it is creating value for shareholders.

The company's profitability scored a 7 out of 10 rating. Although the operating margin is in decline, it is still outperforming a majority of competitors. Verizon is also being supported by strong returns, a moderate Piotroski F-Score of 5, which suggests business conditions are stable, and a predictability rank of one out of five stars. According to GuruFocus, companies with this rank return an average of 1.1% annually over a 10-year period.

Of the gurus invested in Verizon,

After previously selling out of a position in Zynga (

ZNGA, Financial) in the fourth quarter, Diamond Hill entered a new 15.9 million-share stake, dedicating 0.66% of the equity portfolio to it. During the quarter, shares traded for an average price of $10.47 each.

The mobile and online game developer, which is headquartered in San Francisco, has a market cap of $11.21 billion; its shares were trading around $10.33 with a price-book ratio of 3.83 and a price-sales ratio of 5.37. 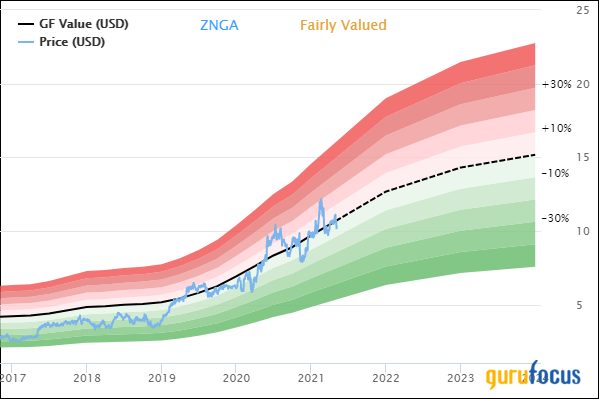 Zynga's financial strength was rated 5 out of 10 by GuruFocus. In addition to being weighed down by weak debt ratios, the Altman Z-Score of 1.86 warns the company is under some pressure since assets are building up at a faster rate than revenue is growing.

The company's profitability did not fare as well, scoring a 3 out of 10 rating on the back of negative margins and returns that underperform a majority of industry peers. Zynga also has a low Piotroski F-Score of 2, which indicates operations are in poor shape. As a result, the one-star predictability rank is on watch.

With a 1.47% stake, Diamond Hill is Zynga's largest guru shareholder. Other guru investors include Pioneer,

Impacting the equity portfolio by 1.02%, the firm boosted its Facebook (

Diamond Hill now holds 1.6 million shares total, accounting for 1.91% of the equity portfolio. GuruFocus estimates the firm has gained 35.13% on the investment since the fourth quarter of 2015. 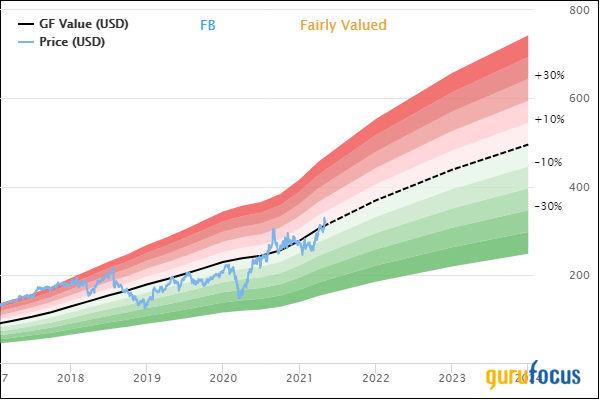 GuruFocus rated Facebook's financial strength 7 out of 10, driven by a comfortable level of interest coverage as well as a robust Altman Z-Score of 21.1 that indicates it is in good standing. The ROIC also eclipses the WACC, suggesting good value creation.

The company's profitability scored a 10 out of 10 rating on the back of margins and returns that outperform a majority of competitors. Facebook also has a high Piotroski F-Score of 7, which suggests operations are healthy. As a result of consistent earnings and revenue growth, it also has a perfect five-star predictability rank. GuruFocus says companies with this rank return an average of 12.1% annually.

With an impact of 0.94% on the equity portfolio, Diamond Hill increased its AbbVie (

The firm now holds 2.26 million shares total, which represent 0.99% of the equity portfolio. GuruFocus data shows it has gained an estimated 7.7% on the investment since establishing it in the second quarter of 2020.

The biopharmaceutical company, which is headquartered in Chicago, has a market cap of $203.44 billion; its shares were trading around $115.28 on Wednesday with a price-earnings ratio of 40.24, a price-book ratio of 15.51 and a price-sales ratio of 4.24. 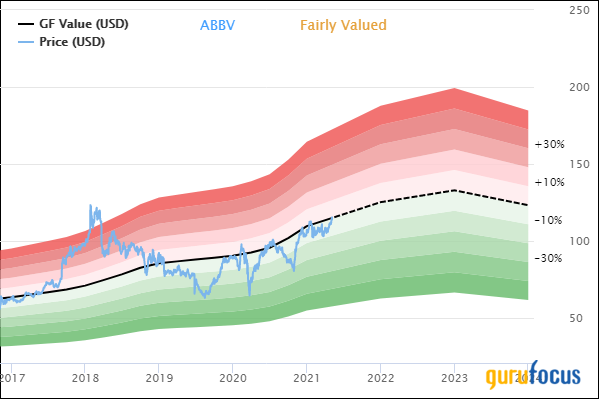 AbbVie's financial strength was rated 3 out of 10 by GuruFocus. Although the company has sufficient interest coverage, the Altman Z-Score of 1.27 warns it could be at risk of going bankrupt if it does not improve its liquidity. The ROIC, however, is above the WACC, indicating good value creation.

The company's profitability fared even better with an 8 out of 10 rating. Even though its margins are in decline, they still outperform a majority of industry peers. AbbVie is also supported by strong returns and a moderate Piotroski F-Score of 4. Although the company has recorded steady earnings and revenue growth, its two-star predictability rank is on watch. GuruFocus data shows companies with this rank return, on average, 6% annually.

Of the many gurus invested in AbbVie, Buffett has the largest stake with 1.45% of outstanding shares. Other top guru shareholders include

The firm reduced its long-held position in TJX Companies (

Diamond Hill now holds 559,571 shares total, making up 0.15% of the equity portfolio. GuruFocus estimates it has gained 56.04% on the investment so far.

The Framingham, Massachusetts-based company, which operates discount department stores TJ Maxx, Marshall's and HomeGoods, has an $85.67 billion market cap; its shares were trading around $71.04 on Wednesday with a price-earnings ratio of 1,182.75, a price-book ratio of 14.65 and a price-sales ratio of 2.71.

According to the GF Value Line, the stock is currently significantly overvalued. 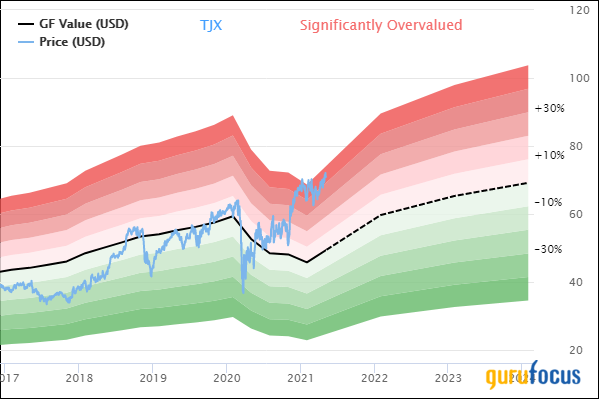 The valuation rank of 1 out of 10 also points to overvaluation since the share price and price ratios are all approaching 10-year highs.

GuruFocus rated TJX's financial strength 5 out of 10. Although the company has poor interest coverage, the Altman Z-Score of 3.55 indicates it is in good standing despite the fact its assets are building up at a faster rate than revenue is growing. The WACC is eclipsing the ROIC, however, indicating issues with creating value.

The company's profitability scored a 7 out of 10 rating despite having declining margins and returns that underperform a majority of competitors. TJX also has a moderate Piotroski F-Score of 4, but the one-star predictability rank is on watch as a result of its revenue per share declining over the past three years.

The firm's $24.74 billion equity portfolio, which is composed of 142 stocks, is most heavily invested in the financial services sector with a 29.14% weight. The consumer cyclical and health care spaces have much smaller representations at 13.03% and 11.01%. 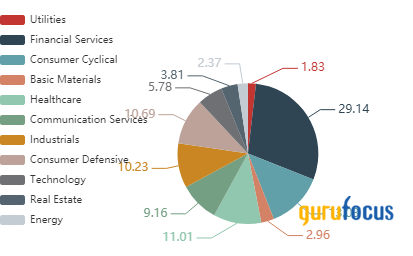