Starting this week, I will be writing a weekly column on the market. Over the years, I have put most of my effort into the technology side of GuruFocus, though I still wrote my book, "Invest Like a Guru." I have spent more time observing the market lately. I hope that by sharing my observations of the market, it will help our GuruFocus community. Please do follow me here on GuruFocus.com.

ARKK, Financial) dipped below $100 for the first time since last November. ARKK is now more than one-third below its peak of $156 a little over three months ago, back when its star manager, Cathie Wood, was everywhere on financial media and attracted a large group of followers into her funds. She was hailed by some as the new Warren Buffett (Trades, Portfolio).

If we look at ARKK's performance numbers today, it is still one of the best, if not the best, among all ETFs, mutual funds and hedge funds over the past 12-month, three-year and five-year periods. The chart below compares the performances of ARKK versus Berkshire Hathaway (

BRK.A, Financial)(BRK.B, Financial) over the past 12 months. ARKK still outperformed by more than 10%. 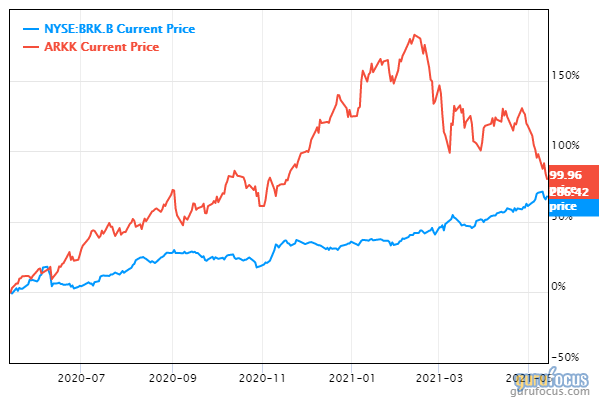 That is the price you pay if you chase hot funds. Sometimes it is painful for the fund managers, too. They may have good track records, but they lost more money than they made.

This reminds me of

The Cathie Wood phenomena is a lot more like the Janus Fund during the dotcom era of the 1990s. Heavily invested in technology stocks, Janus routinely led the list of the best mutual funds. Money poured in at the rate of $1 billion a day. Back then, $1 billion was a lot more money than it is today. Then the dotcom bubble burst, Janus Fund lost money in three consecutive years from 2000 to 2002 and ranked at the bottom of mutual funds. The investors who once were rushing into the funds were streaming out, and most of them lost money. The fund never bounced back.

Chasing hot funds never works. Sure, skill is needed in stock picking. That is why we have

Warren Buffett (Trades, Portfolio). But most of the star managers became stars not because they are better at stock picking, but because they are the most aggressive person in their style of investing while that style has the wind at its back. But every once in a while, the direction of the wind changes. With the Covid-19 pandemic, technology stocks, especially those with hyper growth prospects, gained momentum and many saw their price multiplied in a matter of months. Cathie Wood owns a lot of them. About half of the stocks she owns are those of earningless hyper growth companies. She became the hero, but then the direction of the wind turned.

That was what happened to Janus Fund. This is what is happening to Cathie Wood, too.

I personally know a lot of people who bought ARKK. I surveyed them yesterday and every one of them lost money and about half of them sold at a loss. I wonder whether the size of ARKK will repeat that of

But maybe it is time for Berkowitz's value approach to shine again. After more than a decade of underperformance and reaching the bottom at the second half of 2020, value stocks are coming back. It has outperformed since then, as shown in the chart below, which illustrate the difference in rolling five-year annualized return between Russell 1000 Value and Growth.

The pattern of the stock market from 2010 to 2020 looks a lot like what happened from 1990 to 2000. We know what happened to the Janus Fund. We have yet to see what will happen to Cathie Wood.