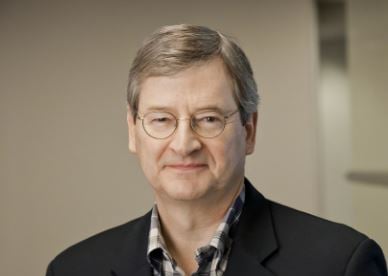 When picking stocks, the guru's Omaha, Nebraska-based firm combines Benjamin Graham's principles of price sensitivity and insistence on margin of safety with a conviction that qualitative factors that allow the company to control its future can be more important than statistical metrics like book value and earnings.

In his first-quarter letter, Weitz observed that the "reopening" trade that was kickstarted by positive vaccine trials in November continued into the new year, while "'stay at home' winners took a breather."

"With the benefit of hindsight, we can see that the recent fiscal year began near the pandemic market trough," he wrote. "Given the powerful market rally, 12-month returns across nearly the entire portfolio were very strong."

Keeping these considerations in mind, Weitz said the firm was active "on both the buy and sell sides of the trading ledger." He entered only one new position during the quarter, which was Dun & Bradstreet Holdings Inc. (

DNB, Financial), dedicating 0.32% of the equity portfolio to the position. The stock traded for an average price of $24 per share during the quarter.

The Short Hills, New Jersey-based company, which provides commercial data, analytics and insights for businesses, has a $9.46 billion market cap; its shares were trading around $21.95 on Friday with a forward price-earnings ratio of 20.8, a price-book ratio of 2.63 and a price-sales ratio of 5.02.

Since its initial public offering last July, the stock has tumbled nearly 15%. Its price ratios are closing in on one-year lows. 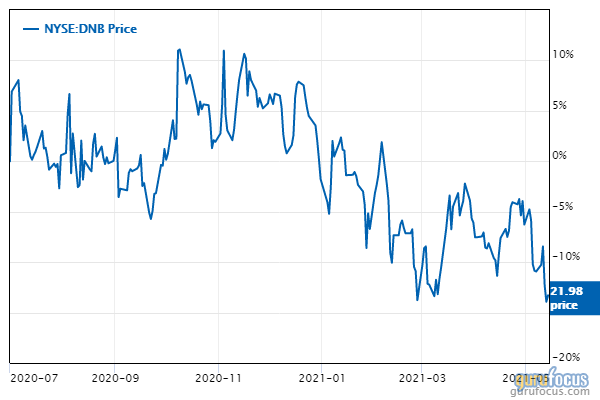 In his quarterly letter, Weitz noted that under the leadership of Chairman Bill Foley and CEOAnthony Jabbour, the company "has moved to modernize its technology, improve its sales and contracting practices, invest in new data and capabilities to enhance its value to customers, and evaluate potential acquisitions to boost each of these efforts."

Dun & Bradstreet's financial strength and profitability were both rated 3 out of 10 by GuruFocus. In addition to poor interest coverage, the Altman Z-Score of 0.95 warns the company could be in danger of bankruptcy. The return on invested capital is also being eclipsed by the weighted average cost of capital, indicating struggles with creating value.

While the operating margin is outperforming over half of the company's competitors, its returns on equity, assets and capital are negative and underperforming compared to other players.

The guru divested of his 558 remaining Berkshire Hathaway Class A (

Weitz now holds 566,300 Class B shares, accounting for 6.46% of the equity portfolio. It is also his top holding. GuruFocus estimates he has gained 7.23% on the investment so far.

The insurance conglomerate run by 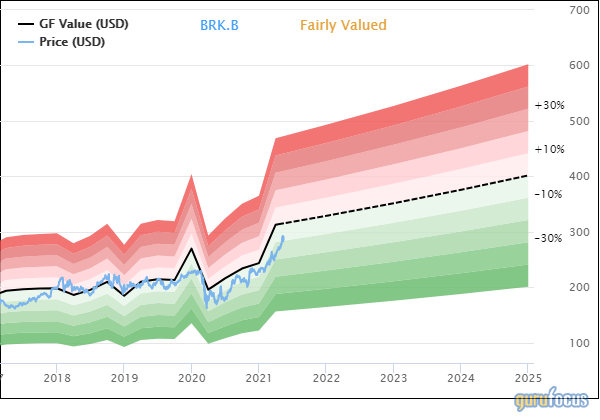 The valuation rank of 6 out of 10, however, points more toward undervaluation even though the share price and price-book ratio are approaching 10-year highs.

In a market perspective published in March, Weitz highlighted why Berkshire has long been one of the firm's portfolio holdings, calling it a "practical example of the kind of company that we look for that seeks to serve all of its constituencies, shareholders, employees, customers and communities in a socially responsible and sustainable manner."

GuruFocus rated Berkshire's financial strength 5 out of 10. Although the company has issued approximately $10.8 billion in new long-term debt over the past three years, it is at a manageable level due to a comfortable level of interest coverage. Assets are also building up at a faster rate than revenue is growing, suggesting it is becoming less efficient. It is creating value, however as the ROIC surpasses the WACC.

The company's profitability fared even better with a 7 out of 10 rating, driven by strong margins and returns that outperform a majority of industry peers, a high Piotroski F-Score of 7, which indicates operations are healthy, and consistent earnings and revenue growth. Berkshire also has a predictability rank of four out of five stars. According to GuruFocus, companies with this rank return an average of 9.8% annually over a 10-year period.

Of the gurus invested in Berkshire Hathaway,

Continuing his trend of reductions to the Diageo (

Weitz now holds 18,000 shares total, which represent 0.13% of the equity portfolio. GuruFocus estimates he has gained 106.45% on the investment so far.

The British brewer, which owns brands like Johnnie Walker, Guinness and Captain Morgan, has a $110.3 billion market cap; its shares were trading around $188.97 on Friday with a price-earnings ratio of 69.21, a price-book ratio of 11.49 and a price-sales ratio of 6.86.

According to the GF Value Line, the stock appears to be modestly overvalued currently. 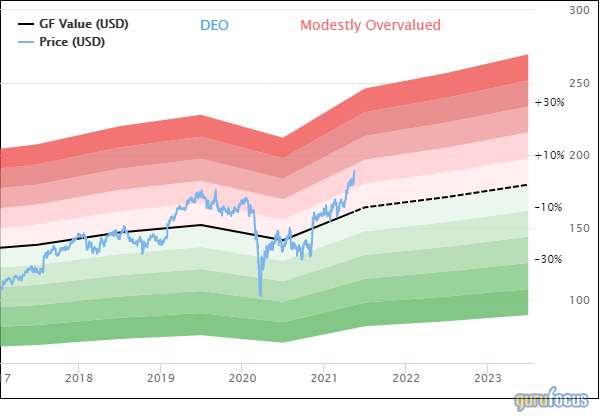 The valuation rank of 1 out of 10 also leans toward overvaluation since the share price and price-related ratios are all close to 10-year highs.

Diageo's financial strength was rated 4 out of 10 by GuruFocus. Despite issuing approximately 7.4 billion pounds ($10.4 billion) in new long-term debt over the past three years, it is at a manageable level as a result of adequate interest coverage. The Altman Z-Score of 2.84, however, indicates it is under some pressure. The ROIC is above the WACC.

The company's profitability scored an 8 out of 10 rating, driven by an expanding operating margin, strong returns that outperform a majority of competitors and a moderate Piotroski F-Score of 5, which implies business conditions are stable. As a result of revenue per share declining over the past 12 months, the 3.5-star predictability rank is on watch. GuruFocus says companies with this rank return, on average, 9.3% annually.

Gayner is Diageo's largest guru shareholder with a 0.23% stake.

With an impact of -0.63% on the equity portfolio, Weitz curbed his holding of CarMax (

He now holds 569,700 shares total, which make up 3.37% of the equity portfolio. GuruFocus data shows the guru has gained an estimated 59.73% on the investment. 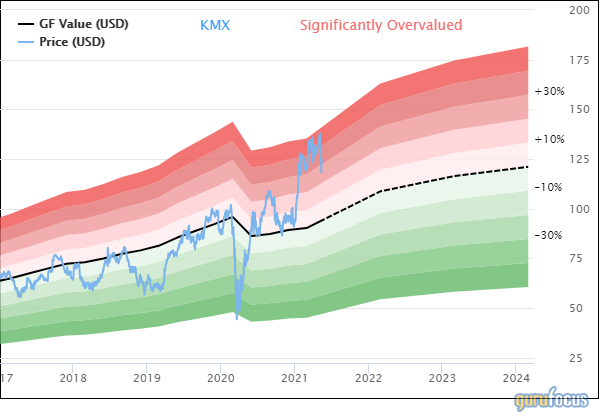 Weighed down by approximately $1.9 billion in new long-term debt and extremely weak interest coverage, GuruFocus rated CarMax's financial strength 3 out of 10. The Altman Z-Score of 2.13 also indicates the company is under some pressure since it has recorded losses in operating income in recent years. The ROIC has also fallen below the WACC, indicating poor value creation.

The company's profitability fared better, scoring a 7 out of 10 rating even though the operating margin is in decline. CarMax is supported by strong returns that outperform a majority of industry peers and a moderate Piotroski F-Score of 5. It also has a five-star predictability rank, which is on watch due to revenue per share declining over the past year. GuruFocus data shows companies with this rank return an average of 12.1% annually.

Impacting the equity portfolio by 2.39%, Weitz boosted his AutoZone (

The investor now holds 39,975 shares total, which have a weight of 2.5% in the equity portfolio. He has gained 29.76% on the investment so far based on GuruFocus data.

The after-market auto parts retailer, which is headquartered in Memphis, Tennessee, has a $33.41 billion market cap; its shares were trading around $1,513.56 on Friday with a price-earnings ratio of 19.23 and a price-sales ratio of 2.68. 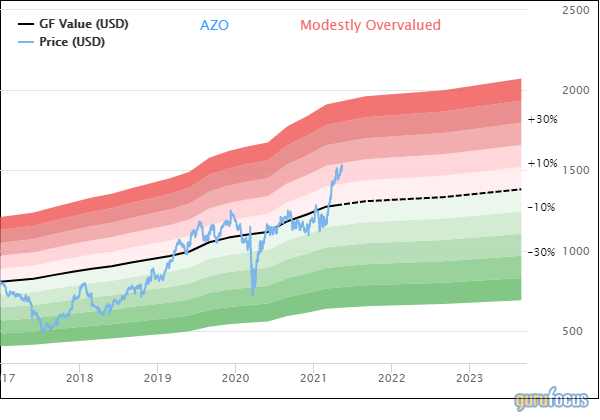 The valuation rank of 4 out of 10 aligns with this assessment since the share price and price-sales ratio are approaching 10-year highs.

In his quarterly commentary, Weitz noted the company has significant growth potential as it "continues to have success with its traditional do-it-yourself customers, and it is still in the early stages of rolling out its commercial account business that reaches do-it-for-me customers."

AutoZone's financial strength was rated 5 out of 10 by GuruFocus. Although the company has issued approximately $322.2 million in new long-term debt over the past three years, it is at a manageable level as a result of sufficient interest coverage. The Altman Z-Score of 2.83 indicates the company is under some pressure even though the ROIC eclipses the WACC.

The company's profitability scored a 9 out of 10 rating, driven by strong margins and returns that outperform a majority of competitors. AutoZone has a moderate Piotroski F-Score of 6. Due to steady earnings and revenue growth, it also has a 4.5-star predictability rank. GuruFocus data indicates companies with this rank return 10.6% on average annually.

Roughly half of the guru's $2.24 billion equity portfolio, which is made up of 57 stocks, is invested in the financial services and communication services sectors. 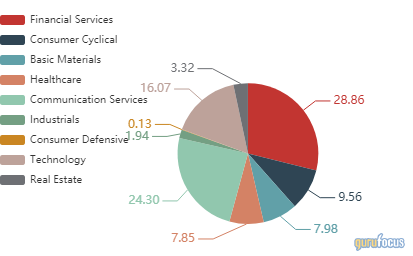 According to its quarterly letter, the Weitz Partners III Opportunity Fund returned 7.3% in the first quarter, slightly outperforming the S&P 500 Index's return of 6.17%.