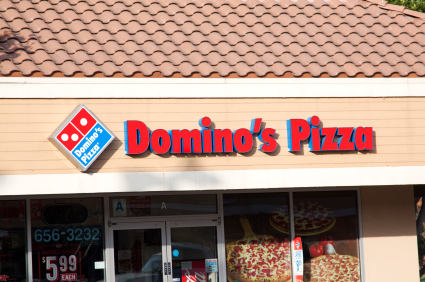 At The Wall Street Journal's Future of Everything Festival, he explained, "We sold Starbucks. It got to a price that it was hard to earn the excess return we like to earn ... The stock just recovered too quickly".

As for the Domino's purchase, he noted that its share price dropped dramatically for "reasons we didn't understand," making it possible to swap Starbucks for Domino's. He was unable to buy as much as he would have liked, but still picked up almost 6% of its shares. 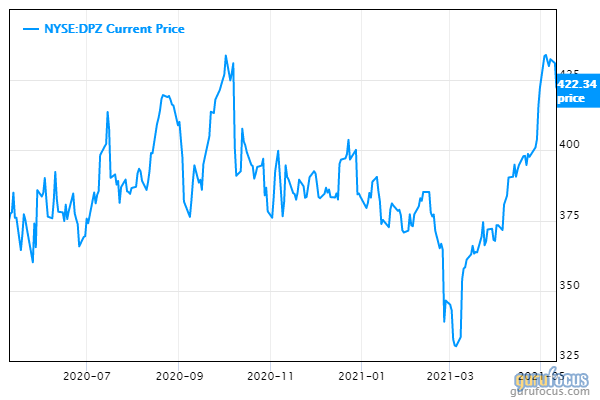 Domino's price began to slump in early October 2020, and it deepened when the fourth-quarter results came out on Feb. 25. From there, it kept sliding until it bottomed out at close to $330.

Soon afterward, the price began to rise and it was nearly $100 higher at the close of trading on May 14. Ackman's purchases probably helped push the price up after March 5; when big funds buy, they have to buy in relatively large quantities.

However, the guru wasn't buying just on price. He also likes the restaurant space, saying, "Domino's is a pure franchising company and interestingly they were the first to invest in technology and delivery." He also noted, "They own their delivery infrastructure and they don't need to rely on the DoorDashes of the world."

At the end of 2020, three of the seven stocks in his concentrated portfolio were in the restaurant business:

Founded in 1960, Domino's now considers itself the largest pizza company in the world based on global retail sales. It operates 17,600 stores in more than 90 markets worldwide. Its business model starts with delivery, although it also attracts a significant amount of revenue from carryout customers.

It is primarily a franchisor, with about 98% of its locations owned by independent franchisees. In its 10-K for 2020, it said it generates its revenue and earnings by charging royalties and fees to those franchisees.

Despite the difficulties posed by the Covid-19 pandemic, Domino's increased its sales last year. In addition, it launched three new products ("new and improved" chicken wings, chicken taco pizza and cheeseburger pizza). Its digital channel also grew significantly last year, which is not a surprise given the pandemic-induced restrictions.

Domino's competes in the delivery and carryout segments of the broader pizza sector.

American competitors include regional, local and national chains such as Pizza Hut (owned by YUM Brands (

Internationally, it competes against Pizza Hut and Papa John's, as well as national chains and local pizzerias.

The basis for competition includes product quality, location, image, service, technology, convenience and price. It had a return on capital of 50.92% at the end of the first quarter of 2021, slightly more than double that of Papa John's (24.85%). This suggests Domino's is in a strong competitive position because of its brand power. 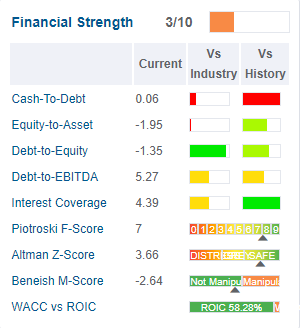 The score is weak, but on the other hand, Domino's is a Buffett-Munger stock, and companies that make it through that scanner have to meet this criterion: "Companies that incur little debt while growing business."

It's also a company that has used borrowed funds since inception. As it noted in the 10-K, "Since 1998, the Company has been structured with a leveraged balance sheet and has completed a number of recapitalization transactions."

On Dec. 31, the balance sheet had these figures:

The Piotroski F-Score and Altman Z-Score are adequate, showing that management is doing a good job and that there is no threat of bankruptcy. 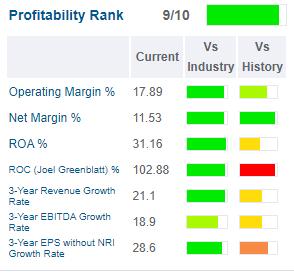 An excellent score for profitability, but the GuruFocus system generates a serious warning about a decline in the operating margin. Closer examination shows that was true in 2018, but otherwise, the numbers have been going up: 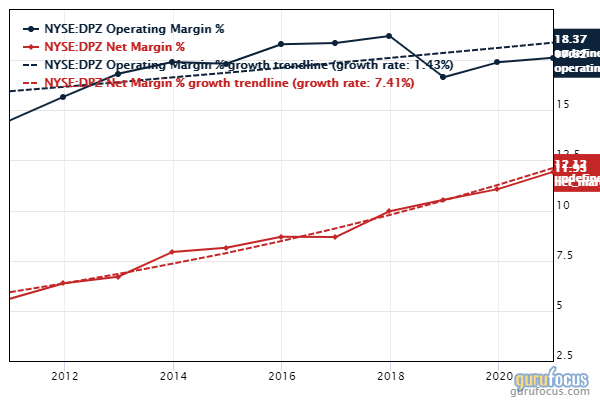 All three of the growth lines, for revenue, Ebitda and earnings per share, are very good.

The pizza company has pasted some enviable returns. We start with the annualized returns:

Total returns for the past five years have been: 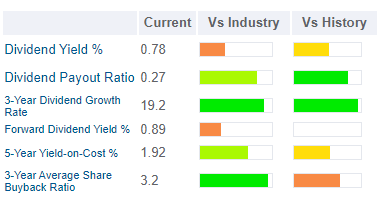 The total return shown above includes a dividend. And that dividend, per share, has risen rapidly over the past decade: 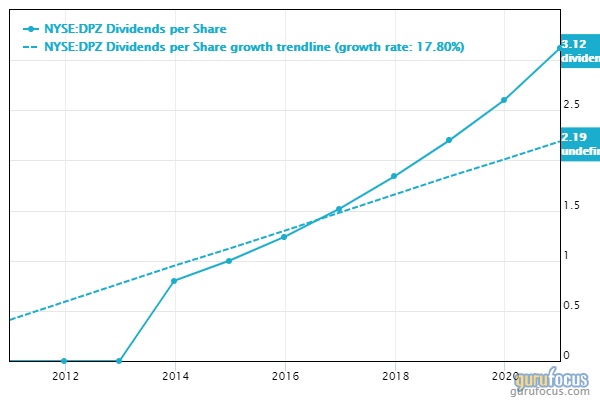 However, the strength of the dividend is not apparent because of the growing share price: 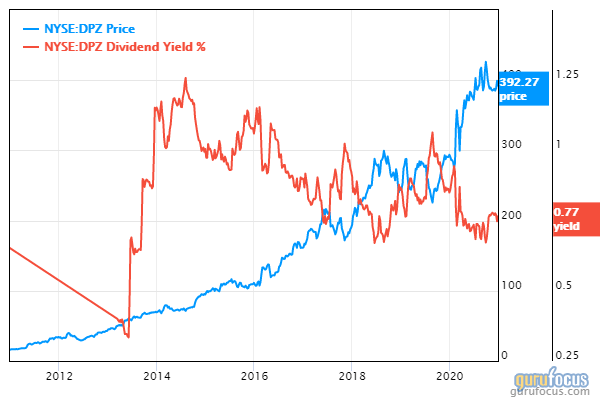 With a dividend payout ratio of 27%, there is obviously room to grow it. But can Domino's afford to raise it? The answer comes from the amount of free cash flow available, and history suggests it should be able to continue increasing the dividend: 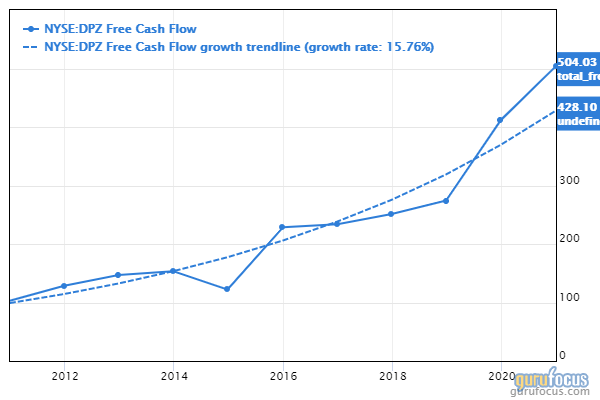 Shareholders also have seen the value of their shares increase because of share repurchases: 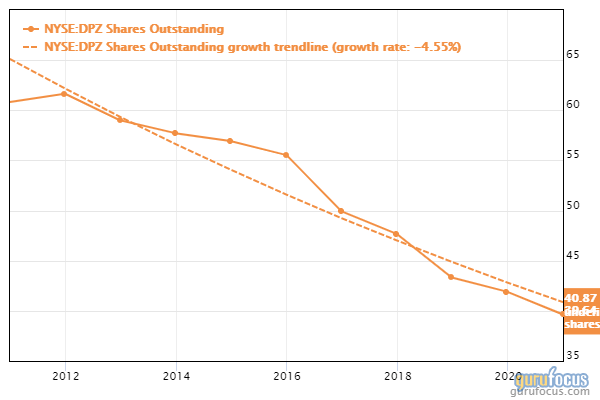 This is a 10-year price chart: 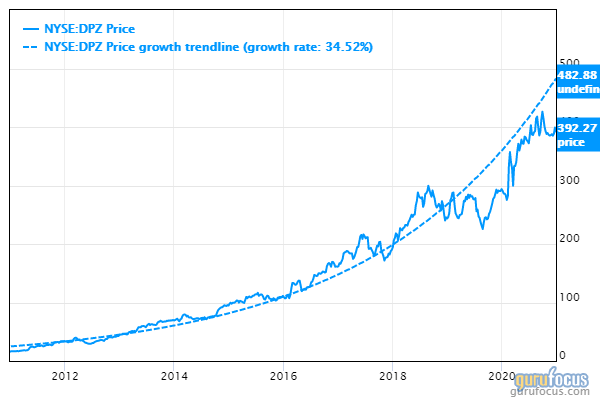 The shares that Ackman bought around $330 have rewarded him handsomely already.

Is it still possible to buy Domino's and earn a decent return? According to the GuruFocus Value Line, the stock is only modestly overvalued: 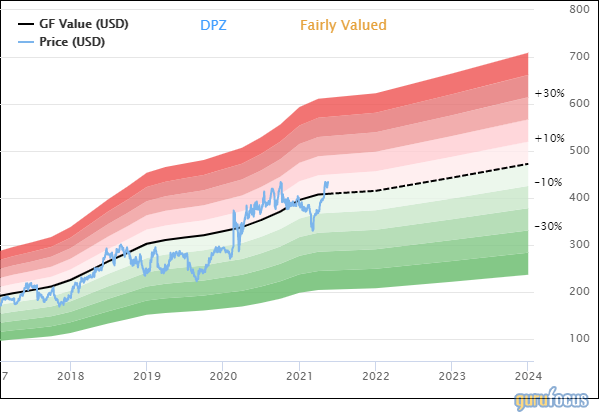 The PEG ratio, which provides a valuation in the context of Ebitda growth, also suggests modest overvaluation (1.76 versus the fair value mark of 1.00).

The discounted cash flow calculator, using earnings power and based on a four out of five-star predictability rating, shows a margin of safety: 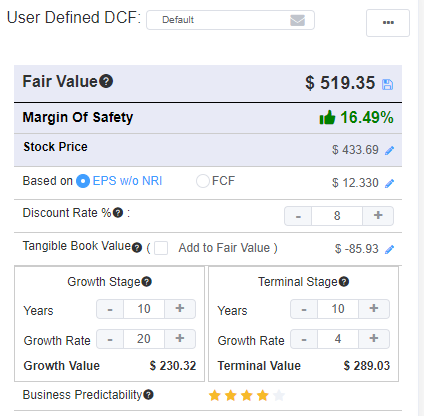 If you follow Ackman, though, the price may be too high; he said that Pershing picked up nearly 6% of Domino's but wanted to buy more. He might not have bought more because he found the price too high to continue.

With the notable exception of Ackman and a few others, gurus are doing more selling than buying:

Eight of the gurus owns shares in Domino's, and these three have the largest holdings:

When the next set of reports comes out, Ackman should have the largest position; as he noted last week, he bought nearly 6% of the shares outstanding.

Ackman and his hedge fund, Pershing Square, made a bold move by selling Starbucks and buying Domino's Pizza. It could also be called a contrarian move, as gurus were selling more than they were buying at the time.

Still, with the price going up $100 since he began buying in the $330s, Ackman has done very well with his swap. He should see even more profits in years ahead because Domino's is a high-quality company available at a fair price.

Despite the numbers, value investors will want to be cautious in light of Domino's debt and small margin of safety. Growth investors who look at the price chart may see an opportunity, while income investors have reasons to study both the dividend and total return.

Disclaimer: I do not own shares in any of the companies named in this article and do not expect to buy any in the next 72 hours.