Seth Klarman (Trades, Portfolio) protege follows a fundamental, value-oriented approach to stock picking, investing in a fairly concentrated number of securities. His Boston-based firm searches for long-term opportunities among a wide variety of asset types in both foreign and domestic markets. He also prefers companies in which the CEO has a significant stake, or where the CEO's salary is primarily stock-based.

Keeping these criteria in mind, the guru made several changes to his equity portfolio during the three months ended March 31. Among Abrams' most notable trades included new stakes in Change Healthcare Inc. (

CHNG, Financial), allocating 6.17% of the equity portfolio to the stake. It is now his eighth-largest holding. The stock traded for an average price of $23.16 per share during the quarter.

The Nashville, Tennessee-based health care technology company, which provides revenue, payment cycle management and clinical information exchange solutions, has a $7.01 billion market cap; its shares were trading around $22.96 on Friday with a price-book ratio of 2.15 and a price-sales ratio of 2.86.

The price chart shows the stock has climbed over 50% since its initial public offering in June of 2019. 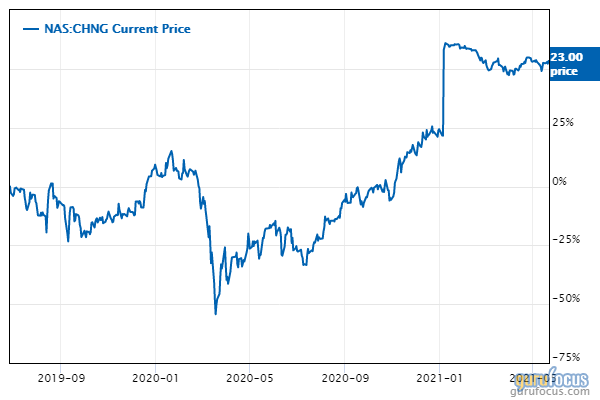 GuruFocus rated Change Healthcare's financial strength 2 out of 10 on the back of poor debt ratios and a low Altman Z-Score of 0.41, which warns the company could be in danger of bankruptcy if it does not improve its liquidity.

The company's profitability fared even worse with a 1 out of 10 rating. Change Healthcare has negative margins and returns on equity, assets and capital that underperform a majority of competitors, but the Piotroski F-Score of 5 indicates operations are stable.

Abrams is now the company's largest guru shareholder with a 4.05% stake. Other top guru investors are

The investor picked up 3.8 million shares of Nuvation Bio (

NUVB, Financial), dedicating 0.77% of the equity portfolio to the position. Shares traded for an average price of $11.15 each during the quarter.

The pharmaceutical company focusing on oncology, which is headquartered in San Francisco, has a market cap of $3.03 billion; its shares were trading around $13.62 on Friday with a price-sales ratio of 1,767.85.

According to the price chart, the stock has risen 43% since its IPO in August 2020. 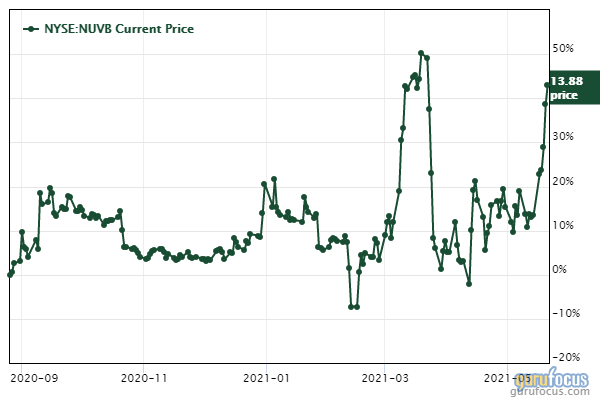 Nuvation Bio's financial strength was rated 5 out of 10 by GuruFocus on the back of it having no long-term debt currently.

Of the gurus invested in Nuvation Bio,

The guru entered a 2.09 million-share stake in Cantaloupe (CLTP), giving it 0.5% space in the equity portfolio. The stock traded for an average per-share price of $10.54 during the quarter.

Formerly known as USA Technologies, the Malvern, Pennsylvania-based software company, which operates in the small ticket electronic payments industry, has an $854.05 million market cap; its shares were trading around $12 on Friday with a price-book ratio of 5.84 and a price-sales ratio of 5.21.

Based on the GF Value Line that takes into account historical ratios, past performance and future earnings projections, the stock appears to be significantly overvalued currently. 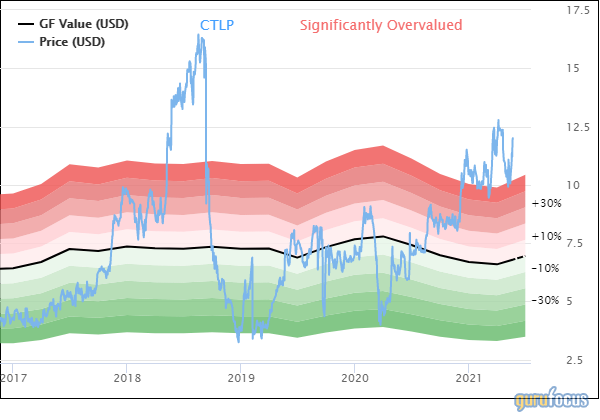 Cantaloupe's financial strength was rated 6 out of 10 by GuruFocus. In addition to good debt ratios, the company has a robust Altman Z-Score of 4.67 that indicates it is in good standing even though assets are building up at a faster rate than revenue is growing and revenue per share has declined over the past 12 months.

The company's profitability did not fare as well, scoring a 3 out of 10 rating as a result of a declining operating margin and negative returns that underperform a majority of industry peers. Cantaloupe is supported by a moderate Piotroski F-Score of 6, however, as well as a predictability rank of one out of five stars. According to GuruFocus, companies with this rank return an average of 1.1% annually over a 10-year period.

With a 2.94% stake, Abrams is now Cantaloupe's largest guru shareholder.

With an impact of -1.96% on the equity portfolio, Abrams dumped all 3.5 million shares of TransMedics Group (

TMDX, Financial). During the quarter, the stock traded for an average price of $30.77 per share.

GuruFocus estimates he gained 12.55% on the investment since establishing it in the second quarter of 2019.

Headquartered in Boston, the medical technology company, which manufactures an organ care device used to more efficiently and effectively transplant lungs, hearts and livers among patients, has a market cap of $692.53 million; its shares were trading around $25.07 on Friday with a price-book ratio of 7.1 and a price-sales ratio of 26.53.

The price chart shows the stock is trading above its median price-book and price-sales ratios, suggesting it may be overvalued. 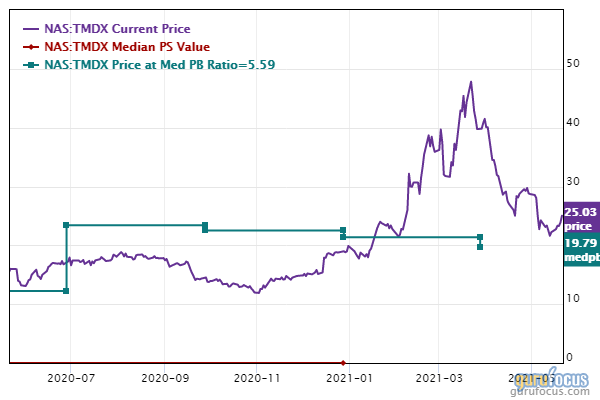 GuruFocus rated TransMedics' financial strength 5 out of 10 on the back of a high cash-to-debt ratio of 3.4 and robust Altman Z-Score of 5.02. The Sloan ratio, however, indicates the company has poor earnings quality. Additionally, revenue per share has declined over the past year.

The company's profitability rank of 1 out of 10 is being weighed down by negative margins and returns that underperform a majority of competitors. TransMedics also has a moderate Piotroski F-Score of 4.

Baillie Gifford (Trades, Portfolio) is currently the only guru invested in the stock.

After slimming down the Sculptor Capital Management (

SCU, Financial) holding over the past several quarters, the guru sold the remaining 521,991 shares. The transaction had an impact of -0.22% on the equity portfolio. During the quarter, shares traded for an average price of $19.79 each.

GuruFocus data shows he gained an estimated 234.24% on the investment, which was established in the second quarter of 2016.

The alternative asset management company based in New York has a $1.46 billion market cap; its shares were trading around $25.20 on Friday with a price-earnings ratio of 10.42 and a price-sales ratio of 1.34. 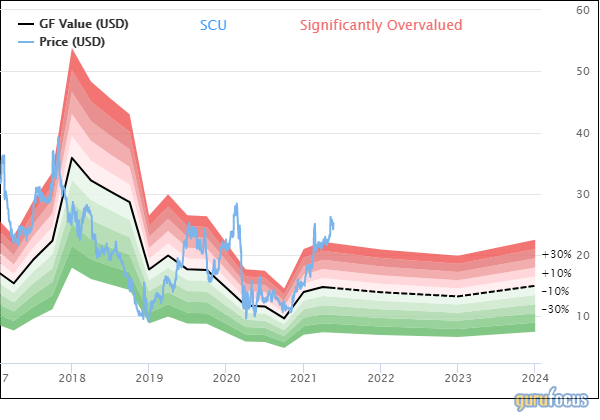 GuruFocus rated Sculptor's financial strength 4 out of 10. Despite having sufficient interest coverage, the Altman Z-Score of 2.37 indicates the company is under some pressure since revenue per share has declined over the past five years. The return on invested capital eclipses the weighted average cost of capital, however, suggesting good value creation.

The company's profitability scored a 5 out of 10 rating. Although the operating margin is in decline, Sculptor has strong returns that outperform a majority of its industry peers, a high Piotroski F-Score of 8, indicating business conditions are healthy, and a one-star predictability rank.

No gurus are currently invested in the stock.

During the quarter, Abrams also curbed his PG&E Corp. (

PCG, Financial) stake by 1.94%, knocking it down to being his ninth-largest holding, and completely eliminated his position in Clear Channel Outdoor Holdings Inc. (CCO, Financial).

Over 35% of the guru's $4.44 billion equity portfolio, which is composed of 16 stocks, is invested in the consumer cyclical sector, followed by smaller representations in the industrials (14.88%) and communication services (14.79%) spaces. 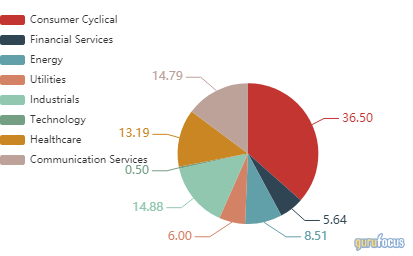