DELL, Financial) has been in the news the past couple of months for its ongoing deal to spin off its 81% stake in VMware (VMW, Financial). There has been speculation over the VMware spinoff for more than a year as the transaction could not only allow for a significant cash injection into Dell but also help unlock shareholder value.

Interestingly, the VMware spinoff is not the only big restructuring move in the cards, as the management is also selling off its Boomi data integration software business to a private equity firm for another $4 billion in order to further strengthen the liquidity of the firm and focus on the core businesses.

Both these restructuring announcements have been perceived positively by the markets, and Dell's recent stellar quarterly result only added to the rally. Overall, I believe that the restructuring efforts coupled with the pandemic-inspired boom in laptop sales should help the stock in continuing to perform well in 2021.

Dell reported yet another all-around beat for its first quarter of 2022. The company reported a top-line of $24.49 billion, which implies an 11.83% growth as compared to the $21.90 billion in revenue reported in the corresponding quarter of the previous fiscal year.

The revenue increase was primarily driven by strong performance across client solutions group (CSG), which witnessed significant growth in demand for computers from the commercial and consumer sectors. Additionally, the strength in Infrastructure Solutions Group (ISG) was driven by improved demand for hybrid cloud solutions. The company cruised past the analyst consensus estimate of $23.40 billion.

These revenues translated into a gross margin of 31.27% and an operating margin of 5.62%, which was higher than that in the same quarter of last year.

Dell reported net income of $887 million and adjusted earnings per share (EPS) of $2.13, surpassing the average Wall Street expectation of $1.60. In terms of cash flows, the company generated $2.24 billion in the form of operating cash flows and spent $519 million in investing activities during the previous quarter, leaving the management with a positive free cash flow, higher than the prior-year quarter.

In April 2021, Dell Technologies announced that it would be spinning off its 81% stake in hyper-converged software company VMware after September of this year. As per the deal, VMware will close to a $12 billion special dividend to all shareholders (about $28 per share), which means Dell's stake will bring in a fresh $9.3 billion to $9.7 billion after the spinoff.

Additionally, Dell and VMware agreed to a five-year commercial agreement where the company will continue to sell VMware's product portfolio, and the two will continue to collaborate on VxRail, VMware Cloud on Dell EMC, VeloCloud SD-WAN, Digital Workspace and security. This acts as a positive development for Dell and may go a long way toward paying off the company's hefty debt load.

Moreover, this will position the company well for investment-grade credit ratings, thereby allowing it to borrow more at lower interest rates.

The market for PCs and laptops is growing better than it has in years owing to work-from-home trends, and Dell continues to benefit from the same. The company updated its Dell Hybrid Client that gives users access to their applications and data delivered from the public cloud, private cloud, or on the device.

Moreover, Dell introduced the new SafeShutter on selected devices, the industry's first automatic webcam that knows when to open or close by syncing to the video conferencing applications.

The company also launched software updates to PowerStore, the industry's first modern, midrange storage architecture in a decade, improving workload performance by up to 25%. By automating data processes, the management is aiming to save customers money while lowering latency by 15%.

Apart from that, the company continues to build on its long history of offering IT-as-a-Service by launching the new APEX portfolio offerings, data storage services, cloud services and custom solutions. APEX helps customers simplify digital transformation by increasing IT flexibility, agility and control via a cloud-based service model. It is worth mentioning that the management also highlighted Dell's growing serviceable total addressable market for its infrastructure business reaching from approximately $150 billion in 2019 to a projected $200 billion by 2025. 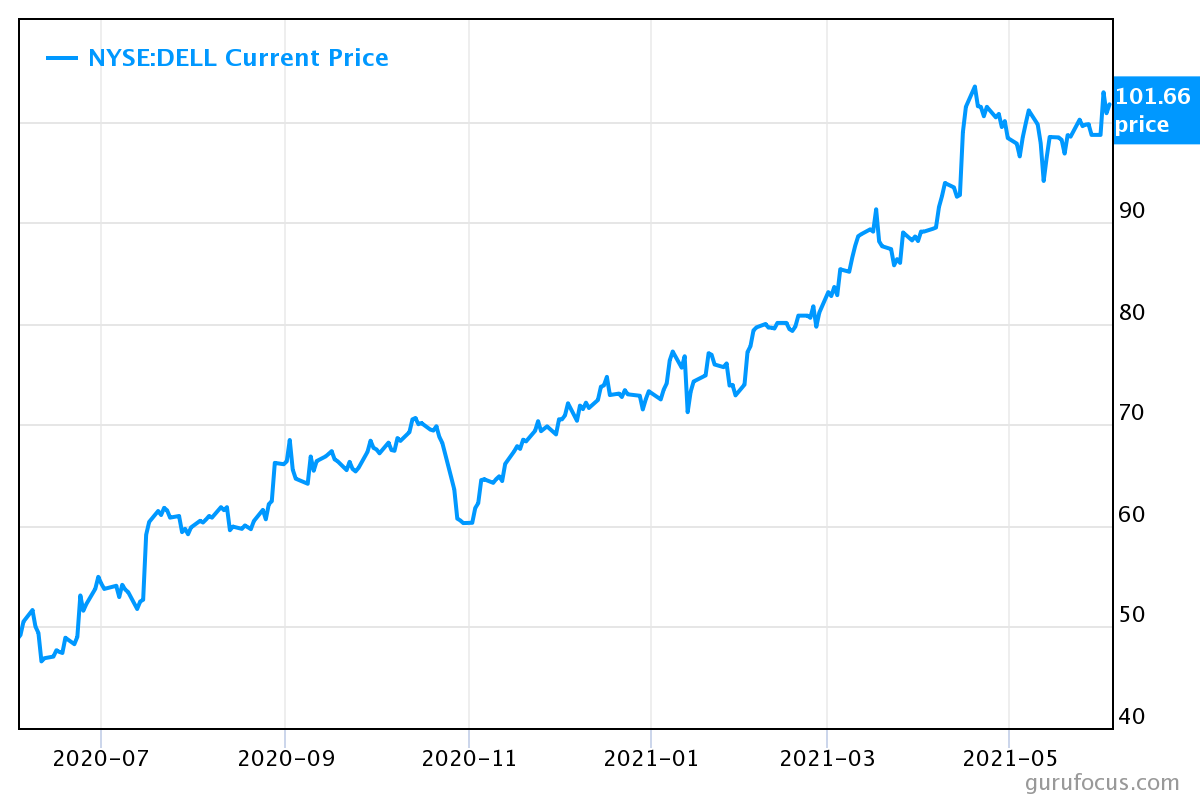 As we can see in the chart above, the stock price of Dell Technologies has skyrocketed and more than doubled in the past 12 months. This rally is partially attributable to the positive sentiment of investors after the company's management confirmed that it would be spinning off its 81% stake in VMWare later this year.

I believe the spin-off greatly simplifies the corporate ownership structure, providing greater flexibility to the management and resulting in strong value unlocking.

Despite the recent rally, Dell is trading at a price-earnings ratio close to 20 and an enterprise-value-to-revenue ratio of 1.2, both of which are modestly lower than the median for the computer hardware industry, indicating a decent potential for multiples expansion going forward. In my opinion, Dell could definitely be an interesting pick at current levels given the upside accelerated trends toward digitalization, remote working and learning environments and cloud-based infrastructure.