State Street Digital: Ready for the Future of Finance 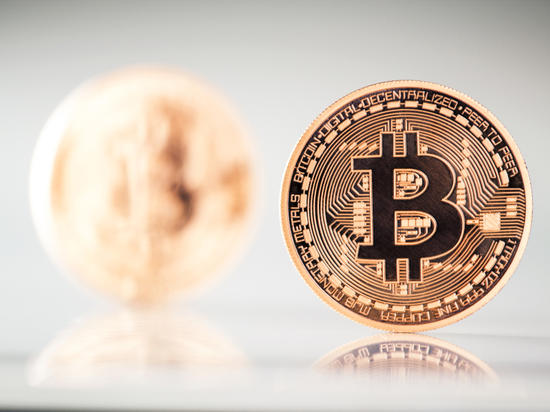 STT, Financial) announced that it is creating a digital finance division called State Street Digital, which will serve as “an investment in the future” of the financial sector as it evolves.

The new division will focus on cryptocurrency, central bank digital currency, blockchain technology and tokenization. It will be led by Nadine Chakar, a three-decade industry veteran and executive vice president, who will in turn report to Chief Operating Officer Lou Maiuri.

“The financial industry is transforming to a digital economy, and we see digital assets as one of the most significant forces impacting our industry over the next five years,” Ron O’Hanley, chairman and CEO of State Street, said. “Digital assets are quickly becoming integrated into the existing framework of financial services, and it is critical we have the tools in place to provide our clients with solutions for both their traditional investment needs as well as their increased digital needs.”

This move makes State Street the second out of the five major global custodian banks to introduce a service for digital assets. The first was Bank of New York Mellon Corp. (

State Street has $3.6 trillion in assets under management and $40.3 trillion in assets under custody, second only to BNY Mellon, so its move towards digital finance is a big step toward more widespread acceptance of digital assets. Moreover, by becoming one of the first asset managers to offer digital currency solutions to institutional investors, State Street will have an advantage over competitors that come later to the game, which is necessary to keep its edge as the demand for digital assets grows.

State Street’s announcement doesn’t come as a surprise; ever since BNY Mellon announced its intention to move into the digital banking sphere in February, it was only a matter of time before is largest peer followed suit in order to avoid missing the bus.

So far, regulatory concerns have been holding institutional cryptocurrency demand in check. Cryptocurrencies and the institutions offering crypto-related services are largely unregulated, so investments in these assets do not have the same protections as investments in equity markets.

However, custodian banks appear to be seeing high demand for crypto among the institutions they serve, and it is a universal business rule that where there’s a buyer, there will be a seller. If their customers are demanding digital banking services, it is necessary for institutions like State Street and BNY Mellon to do everything within their power to meet that demand, unless they want to see customers turn to their competitors who beat them to the punch.

Making a move toward digital banking and investment services is also one of the clearest opportunities for growth and innovation in the financial industry, which has become somewhat stagnated over the past couple of decades. The need for financial institutions to protect their customers’ money before anything else is one of the reasons why the industry is seeing slow growth, especially now that the U.S. has reached late-stage capitalism, where banks can’t simply rely on explosive economic growth to drive their stock prices.

There is a high risk associated with most innovative ventures, which is why financial companies often prefer to acquire new technology rather than develop it themselves. However, digital investment management and banking services show all the signs of a natural evolution from their traditional counterparts in terms of how the company would offer these services to their clients.

In fact, you could say that there are no institutions more qualified to roll out institutional-scale crypto banking than existing institutional-scale bankers. It would be an impossible venture for a new competitor to establish the kind of centuries-old reputation and global client network that the likes of State Street and BNY Mellon have.

According to State Street’s memo, the new division will build on its current digital capabilities. Its proprietary GlobalLink technology platform will be an integral component and will be enhanced into a digital multi-asset platform to support crypto and other peer-to-peer projects.

“Currenex is thrilled to leverage our experience and expertise in the FX and digital asset trading marketplace to provide Pure Digital with robust technology and infrastructure for this exciting digital currency trading initiative,” David Newns, the global head of Execution Services for State Street Global Markets, said. The bank also said that it is evaluating trading crypto on this platform itself, though it has not made any commitments to such a venture.

One particular part of the crypto division that investors are looking forward to is the eventual rollout of a crypto exchange-traded fund.

Crypto ETF hopefuls may have to wait a little longer, but the day we see a bitcoin ETF on the markets may not be too far off. The stumbling block is that there still aren’t really any regulations in place to protect crypto investors. The potential for fraud, manipulation and custody issues has yet to be addressed, so we will likely need to see some sort of regulatory action go into effect before the SEC considers approving this kind of asset.

“Personally, I think if something happens, it’s more likely in 2022. It’s just really getting going. These things take time,” Osprey Funds founder and CEO Greg King said in a CNBC interview on Thursday. Osprey Funds is a crypto asset manager which plans to convert its bitcoin trust to an ETF when it is able to.

“The institutions that now invest with us would not have thought about this two, three years ago when regulatory uncertainty may have been a hurdle for them. Nowadays, that’s not the kind of pushback that we get,” Grayscale Investments CEO Michael Sonnenshein said in the same interview. “And so, I think as time goes on, you’ll see a maturation ... that will give regulators increased comfort with the asset class.”

Regulators actually engaging with the issue is in and of itself a promising sign. While there are still problems with adopting crypto on an institutional scale, engagement with the issue means that efforts are being made towards rule-setting and eventual approval.

When crypto ETFs are allowed to happen, State Street is ready. The company was appointed in March as the fund administrator and transfer agent of the VanEck Bitcoin Trust, an ETF whose launch depends on whether the SEC someday approves crypto ETFs.

The GuruFocus Value chart rates the stock as modestly overvalued based on the combination of past returns and valuations as well as analyst expectations for future earnings. 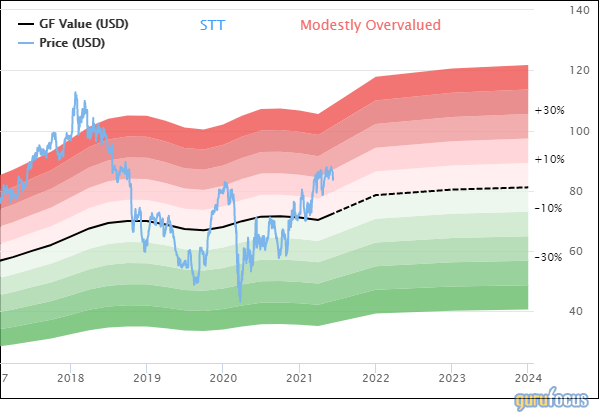 The Shiller price-earnings ratio for the financial services sector as a whole stands at 23.510, which is lower than every other sector except energy, implying that the sector is positioned for higher returns going forward.

The dividend yield of 2.51% is not the highest on the market and is lower than 75% of other companies in the asset management industry, but it is higher than the company’s own historical median yield of 1.78%.

Investors who see potential in the institutional acceptance and growth of digital assets such as crypto may want to consider picking up at shares of State Street. Growth and innovation have historically been strong sources of multiples expansion, which could help drive shares of State Street and BNY Mellon higher.

At this point, though, it’s too early for investors without insider knowledge to tell whether State Street or BNY Mellon will have a more attractive platform for clients, whether another player will enter the field, or whether crypto will face even more regulatory hurdles than expected.