Gurus have been buying these stocks, which are also ranked highly by Greenblatt's Magic Formula

Margaret Moran
Jun 28, 2021
Bookmark
Summary
Joel Greenblatt (Trades, Portfolio) introduced the investing world to the “Magic Formula” when he published his 2005 book, “The Little Book That Beats the Market.” The idea behind the Magic Formula is to apply a simple mathematical formula to find profitable businesses that trade at bargain prices.

The formula ranks companies based on the combination of two metrics: earnings yield and return on capital. The earnings yield, which is defined as earnings before interest and taxes (Ebit) divided by enterprise value, measures how much the company earns compared to how much the stock is valued by the market. The return on capital, which is defined as Ebit divided by the sum of net fixed assets and net working capital, measures how much a company earns compared to what it spends to produce those earnings.

As the formula works best when applied to U.S. companies and companies with market caps of at least $100 million, I have eliminated companies that do not meet these criteria from my search. Small-cap and non-U.S. businesses are often structured differently, so being ranked highly by the “Magic Formula” would not indicate that they are good investments. For the same reason, utilities and financial companies are also not considered.

Below are three companies that rank highly according to the criteria measured by the Magic Formula, found using GuruFocus’ Magic Formula screener. These stocks have also been popular buys among gurus recently, with gurus buying them more often and in greater quantities than they have been selling them, which indicates that they could represent promising value opportunities.

One company that ranks highly on the Magic Formula screener is JOYY Inc. (

YY, Financial), a Chinese global video-based social media platform. Founded in 2005 and listed on the Nasdaq in 2012, the company develops a variety of services in live streaming, short form video, social network, e-commerce, education and internet finance. The company has an earnings yield of 19.24% and a return on capital of 91.06%. 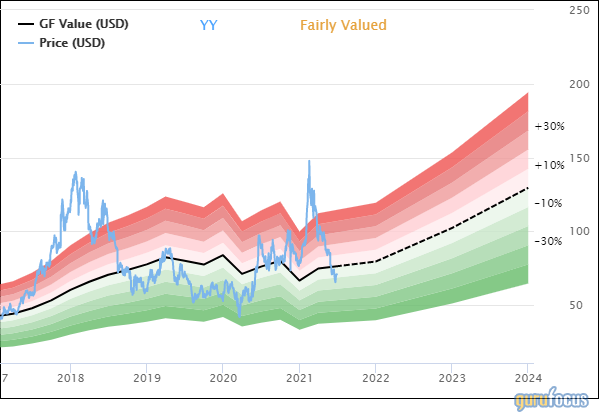 In three out of four of the most recent quarters, a higher number of gurus bought the stock than sold it, as shown in the chart below:

By volume, guru buys of the stock have also exceeded guru sells, with a huge spike in buying volume during the first quarter of 2021:

The biggest guru shareholder of the stock is

JOYY has a capital-light business model that relies on users to create content and attract new audiences, which gives the company a strong foothold from a profitability perspective. This also allows the company to focus on the engineering side of things, aiming to increase the reach of its platforms through globalization and artificial intelligence.

The stock price has been depressed due to regulatory crackdowns in its home country. China has strict content standards that are difficult to monitor for platforms that host user-generated content, which can lead to penalties for streamers and hosting platforms. However, JOYY’s international reach is increasing, with 77.9% of its 470.1 million average monthly active users outside of China, and global diversification should help stabilize earnings.

PRG, Financial), also known as Progressive Leasing, is another company with a high rating on the Magic Formula screener. Through its subsidiaries, the company provides virtual lease-to-own solutions, which it pioneered in 1999, to more than 30,000 retail partner locations. The company has an earnings yield of 24.38% and a return on capital of 66.72%.

On June 28, shares of Progressive traded around $48.77 for a market cap of $3.30 billion and a price-earnings ratio of 11.13, which is below its 10-year median price-earnings ratio of 13.45. The company has a financial strength rating of 6 out of 10 and a profitability rating of 6 out of 10. According to the GF Value chart, the stock is fairly valued. 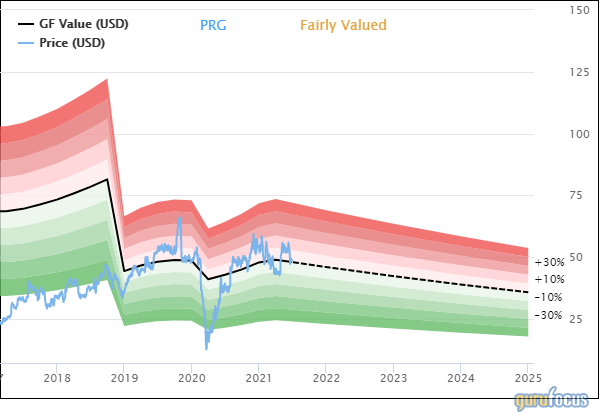 In the first quarter of 2021, gurus took a positive turn on PROG Holdings, with more gurus buying the stock than selling it:

With 2.40% of shares outstanding, Barrow, Hanley, Mewhinney & Strauss is the largest guru shareholder of the company, followed by

While Progressive allows customers to make big purchases they otherwise would not have been able to make or would have had to save for months or years in to afford, high fees can leave some paying double, earning the company a reputation for being predatory. From a business standpoint, however, the lease-to-own transaction market stands to grow as the cost of living in the U.S. is rising faster than the average paycheck.

BCC, Financial), and Idaho-based manufacturer of wood products and building materials, also ranks highly on the Magic Formula screener. The company makes and delivers building materials for the residential and commercial construction industries, and it is the only nationwide full-line wholesale distributor of residential building products in the U.S. It has an earnings yield of 21.81% and a return on capital of 54.56%. 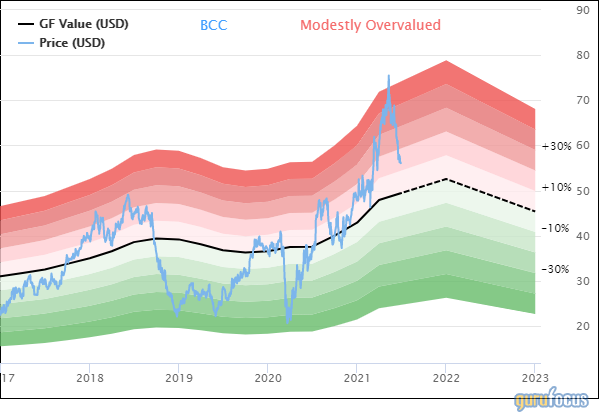 As shown in the chart below, more gurus have been buying the stock than selling it over the past three quarters, with the number of buyers increasing in the first quarter of 2021:

The top guru shareholder of the stock is

Over the past year, Boise Cascade has benefitted from increased housing demand, which has resulted in a sharp demand increase for its residential building materials. Its scale gives the company an advantage in that it is often the first name that potential new customers turn to. The company also prides itself on being shareholder-friendly, which is good news for potential investors.

As demand for housing continues to outpace supply and the U.S. government ups its spending on infrastructure, Boise Cascade and other building materials producers stand to benefit from these powerful macro tailwinds. However, this is a highly cyclical industry, so it is important for investors to keep a close watch for any changes in the outlook.