Income investors should take note of these banks 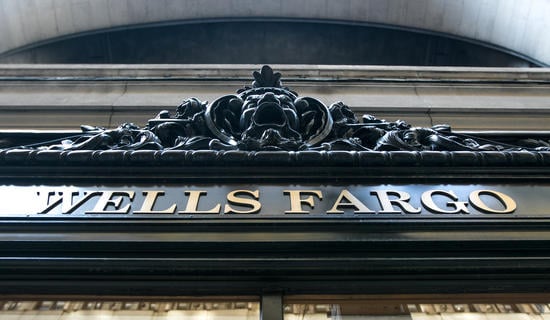 The Federal Reserve announced on June 24 that all 23 of the major U.S. banks passed stress tests designed to see how they would perform under different recessionary scenarios. This paved the way for the companies to return capital to shareholders, with nearly every bank announcing a sizeable dividend increase after not doing so last year due to the uncertainty regarding the Covid-19 pandemic.

We will examine the three companies announcing the largest dividend increases.

GS, Financial) is one of the largest global investment banking companies in the world, offering a range of services to its customers. The company generated revenue of almost $45 billion in 2020 and has a market capitalization of $133 billion.

Following the results of the stress test, Goldman Sachs announced its intention to raise its dividend 60% to $2 per share. While the company did slash its dividend during the Great Recession, Goldman Sachs has now raised its distribution for 10 consecutive years. The dividend has a compound annual growth rate of almost 14% over the last decade.

Wall Street analysts surveyed by Yahoo Finance expect Goldman Sachs will earn $44.99 in 2021. This equates to an expected payout ratio of just 18%. This is below the 10-year average payout ratio of 22%.

Shares of Goldman Sachs closed Friday’s trading session at $374.16. Using analysts’ estimates for the year, the stock has a forward price-earnings ratio of 8.3. Excluding 2011, when earnings per share fell drastically, shares have an average price-earnings ratio of 9.6 over the last decade. Using the historical valuation, shares of the bank are undervalued by just over 15%.

However, the stock appears to be trading above its intrinsic value as calculated by GuruFocus. 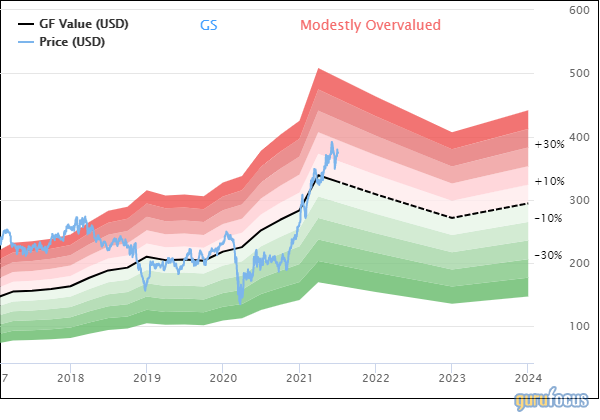 Goldman Sachs has a GF Value of $328.57, resulting in a price-to-GF Value of 1.14. Shares would have to decline 14% to reach their intrinsic value. The stock is rated as fairly valued by GuruFocus.

Goldman Sachs delivered the second-highest dividend increase of the major U.S. banks, an extremely bullish maneuver in my eyes. The company appears well positioned to withstand further market uncertainties. The stock has returned almost 90% over the last year, compared to the 38% gain in the S&P 500 Index, so the easy money has likely been made in the name. That said, the return has only pushed Goldman Sachs just ahead of its intrinsic value and the stock appears inexpensive relative to its history. Investors looking for entry into the financial sector could see the recent dividend increase as a bullish sign to purchase Goldman Sachs.

MS, Financial) is a diversified global financial company that offers underwriting, trading and merger acquisitions services along with full-service brokerage and asset management services. Morgan Stanley is valued at $171 billion and had revenue of $48 billion last year.

Morgan Stanley announced that it intended to increase its dividend 100% to 70 cents from 35 cents, which would extend its dividend growth streak to eight years. The dividend’s compound annual growth rate is north of 21% since 2011 even with several years of a paused distribution. The company also announced that it was increasing its share repurchase authorization to $12 billion, or 7% of its current market cap.

The company’s annualized dividend of $2.80 results in a forward yield of 3% at current prices. For context, Morgan Stanley hasn’t averaged a dividend yield of this magnitude for a whole year since at least 2005. Shares have an average yield of 1.5% over the last decade.

Analysts expect the company to earn $6.91 per share this year, giving Morgan Stanley a projected payout ratio of 41%. This is approximately twice the average payout ratio of 22% since 2011, but not to a level where future dividend growth appears impaired.

With the stock at $92.03 at the most recent close, Morgan Stanley is trading with a forward price-earnings ratio of 13.3. This is a slight premium to the stock’s average multiple of 12 times earnings since 2011. Returning to the average earnings multiple would mean a 10% reduction in the share price.

In addition, shares appear to be considerably higher than their intrinsic value. 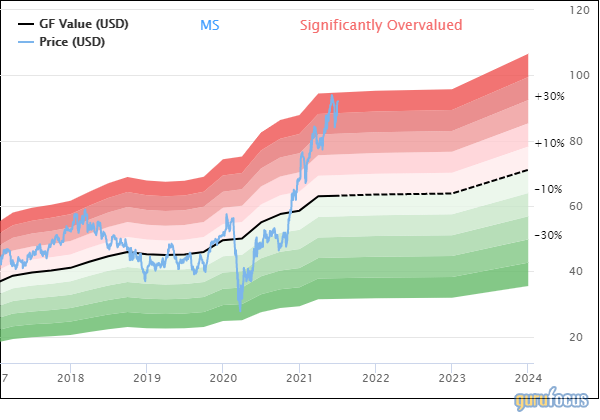 Morgan Stanley has a GF Value of $63.17, giving shares a price-to-GF Value ratio of 1.46. The stock would have to decline 31% to reach the GF Value. As such, Morgan Stanley is rated as significantly overvalued by GuruFocus.

Morgan Stanley had been a name I have been bullish on for some time, though I viewed the stock as a hold earlier this year due to the valuation. The dividend increase does stand out, but the stock continues to trade at elevated valuations, both on a historical basis as well as compared to its intrinsic value. I remain cautious on the stock as it has returned almost 93% over the last year and would wait for a pullback before adding it to my portfolio.

WFC, Financial) provides services such as banking, investing, mortgages and commercial financing. The company is valued at $186 billion and produced revenue in excess of $72 billion in 2020.

Wells Fargo slashed its dividend by 80% in mid-2020 in order to elevate its capital base amid the Covid-19 pandemic. The company announced that it intended to double its dividend to 20 cents from 10 cents. Even with the cut, Wells Fargo’s dividend had a CAGR of 9.8% from 2011 through 2020. The company also announced it would increase its share repurchase authorization to $18 billion, or almost 10% of its current market cap.

With an annualized dividend of 80 cents, Wells Fargo has a new yield of 1.8%. The stock has historically offered a generous yield, paying an average yield of 2.9% since 2011. The most recent increase still puts the annualized dividend at less than half of the pre-2020 reduction.

Wells Fargo is expected to earn $3.82 this year, implying a projected payout ratio of 21% using the new annualized dividend. Excluding last year due to the severe impact from Covid-19 on the company’s business, Wells Fargo has an average payout ratio of 36% since 2011.

Shares trade at $45.07, which equates to a forward price-earnings ratio of 11.8 and nearly matches the long-term average multiple of 11.9 times earnings. 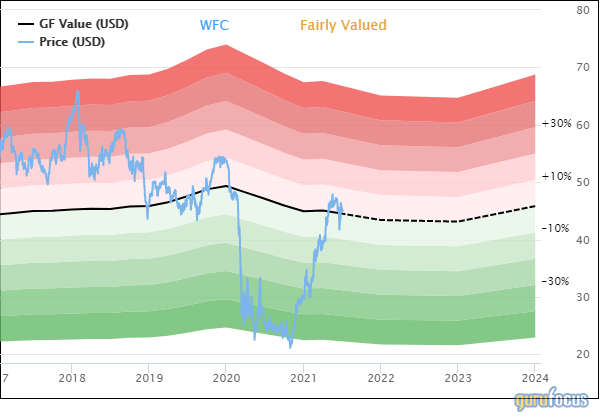 The stock has a GF Value of $44.50, giving Wells Fargo a price-to-GF Value ratio of 1.01. Shares are 1.3% overvalued using intrinsic value. Wells Fargo is rated as fairly valued by GuruFocus.

Wells Fargo isn’t too far removed from the cross-selling scandal, but that hasn’t stopped the stock from gaining 79% over the last 12 months. It should be noted this return is less than the other names discussed, so there might be some overhang from the scandal. Investors who held the stock prior to the cut last year have not yet seen their dividend payments made whole even after the company announced a 100% increase. Shares trade well below their long-term average, but the stock appears to be appropriately priced given its historical valuation and GF Value. For investors who can look past the company’s past misdeeds and recent dividend reduction, Wells Fargo may offer one of the better valuations in the financial sector.

Dividend growth investors owning large financial institutions were left without a dividend increase last summer as the Covid-19 pandemic placed significant burdens on the sector. This summer was much different as nearly all of the banks passing the Federal Reserve’s stress tests announcing increases.

Goldman Sachs, Morgan Stanley and Wells Fargo announced the largest raises. While some dividend growth investors might be hesitant to own Wells Fargo so soon after a dividend cut, the size of each raise can be interpreted as a positive sign of each company’s respective health.

I/we have no positions in any stocks mentioned, and no plans to initiate any positions within the next 72 hours.
Rating: 5 / 5 (4 votes)
4 Comments
Write for GuruFocus
Submit an article
How to use GuruFocus - Tutorials What Is in the GuruFocus Premium Membership? A DIY Guide on How to Invest Using Guru Strategies GuruFocus New Features