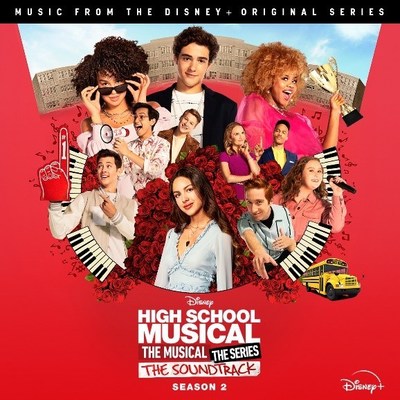 At Spotify, there will be "Storylines" and "Canvas" experiences on the Soundtrack. The "Storylines" card overlays will reveal deeper stories about key songs on the soundtrack, and numerous "Canvas" videos will be pulled from key moments in Season 2. The official "High School Musical" playlist will include Spotify "Clips," short videos in which the cast discuss their favorite songs and moments from the season.

Official music videos from both seasons of "High School Musical: The Musical: The Series" are available on Disney Music VEVO.

At Target, the "High School Musical: The Musical: The Series" (OST/Season 2) offering will include the physical CD, as well as exclusive postcards, a sticker sheet and poster. The Target exclusive is available for pre-order here.

The Disney Hits SiriusXM Channel (#302) has featured weekly "Be Our Guest" episodes, featuring exclusive interviews and Disney Hits favorites from the cast of "High School Musical: The Musical: The Series."

The soundtrack will include all the songs from season two, including the reimagined musical numbers from the stage production of "Beauty and the Beast" as well as fan favorite originals, "Even When/The Best Part" performed by Olivia Rodrigo and Joshua Bassett and "The Rose Song" performed and written by Olivia Rodrigo. The soundtrack already has a staggering 85 million track streams, and 23 million video views to date.

The season two finale will premiere on Friday, July 30 on Disney+, and all of season one is currently available on Disney+. It has been "Certified Fresh" on Rotten Tomatoes as measured by a consensus of reviews by top critics and audience members and was recently awarded a GLAAD Media Award.

About Disney+
Disney+ is the dedicated streaming home for movies and shows from Disney, Pixar, Marvel, Star Wars, National Geographic, and more. As part of Disney's Media and Entertainment Distribution segment, Disney+ is available on most internet-connected devices and offers commercial-free programming with a variety of original feature-length films, documentaries, live-action and animated series and short-form content. Alongside unprecedented access to Disney's incredible library of film and television entertainment, the service is also the exclusive streaming home for the latest releases from The Walt Disney Studios. Disney+ is available as part of a bundle offer that gives subscribers access to Disney+, Hulu (ad-supported), and ESPN+. Visit DisneyPlus.com to subscribe and/or learn more about the service.