The Top 5 Buffett Stocks Outperforming the Market in 2021

These stocks are leaving the S&P 500 in the dust, but some of the names might surprise investors 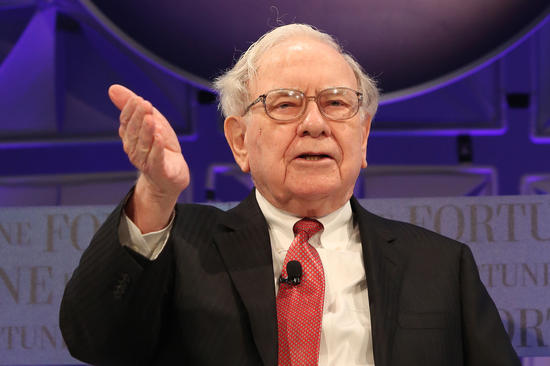 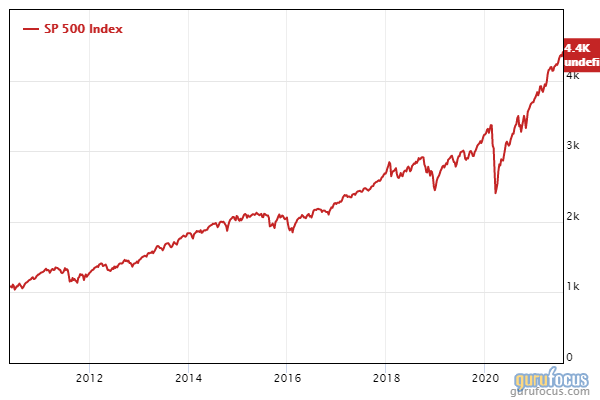 The stock boom has been widespread across the majority of industries and companies, with relatively few areas still moving down. However, that doesn’t mean the market recovery has been the same for all industries and stocks, and while many are still posting gains, they might not even be beating the market average.

With the latest round of 13Fs set to come out next week for the second quarter of 2021, investors will be on the lookout for what their favorite investing gurus have been buying or selling, as well as how their portfolios have been performing recently.

One way that GuruFocus users can see how gurus’ holdings have been doing is by going to their “current portfolio” page and scrolling all the way to the right, which is where you can find the three-month and year-to-date changes in the stock prices of their holdings: 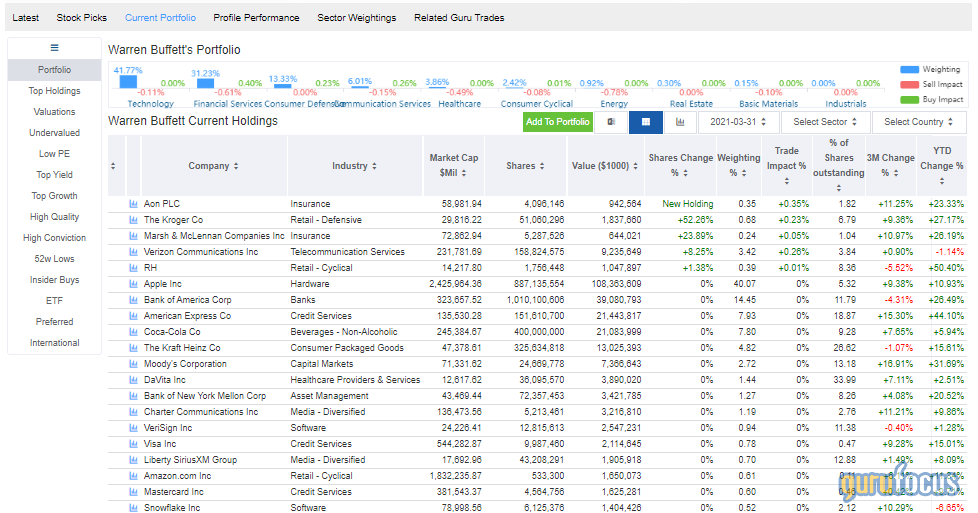 For example, according to

RH, Financial), a California-based retailer selling upscale home furnishings through its stores, catalog and website, has gained 50.40% year to date to trade around $673.62 on July 28. The stock has truly exploded since 2020, as shown in the chart below: 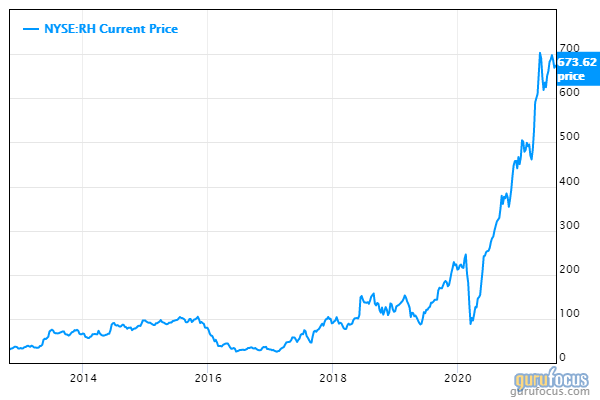 The Oracle of Omaha first picked up shares of RH in the third quarter of 2019, when the stock traded around $142.08 per share, and the holding currently represents 0.39% of the equity portfolio.

RH is making a name for itself as a luxury furniture brand, not just for homes but for stores, restaurants, offices and hotels as well. Trying to break into the luxury market is an incredibly difficult task, but if a company can manage to pull it off, it can report stellar growth. CEO Gary Friedman estimates that the company can grow revenue by as much as 10% to 15% per year over the next decade and cites French luxury goods maker Hermes International SA (XPAR:RMS), which grew from a $20 billion market cap to $100 billion over the course of a decade, as a comparison.

WFC, Financial) has gained 50.23% year to date to trade around $45.49 on July 28. The stock remained fairly stagnant from its fake accounts scandal in 2016 before tanking in the Covid market crash, and it didn’t begin recovering until November of 2020: 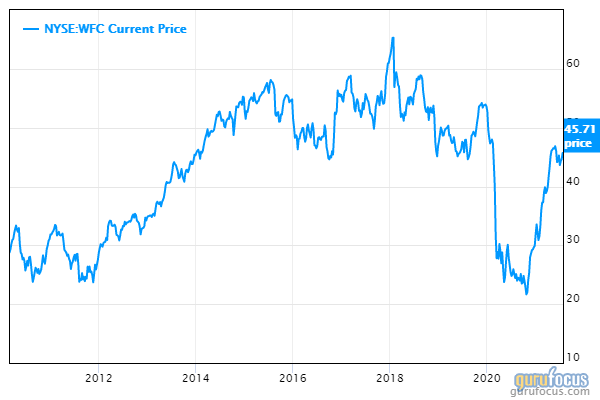 Buffett has been an investor in Wells Fargo for decades, having first built up a holding in the bank between 1989 and 1990. He began to chip away at the position in 2017, and it now represents only 0.01% of the equity portfolio.

Wells Fargo has been a risky investment ever since its fake accounts scandal came to light, in which management pressured employees to meet impossible sales goals, causing some to open fake accounts out of the fear that it was the only way to keep their jobs. After the fallout from this scandal, an asset cap of $1.95 trillion was imposed on the bank, crippling its growth. If Wells Fargo is ever to report significant growth again, it is essential for the asset cap to be removed, and that is a pretty big question mark. However, investors who have held on stand to benefit greatly if this does come to pass.

AXP, Financial) is a New York-based financial services company that provides credit cards, banking, insurance and more. It has gained 44.10% year to date to trade around $170.44 on July 28. Its profits depend mainly on credit card income, which is mirrored in its stock price: 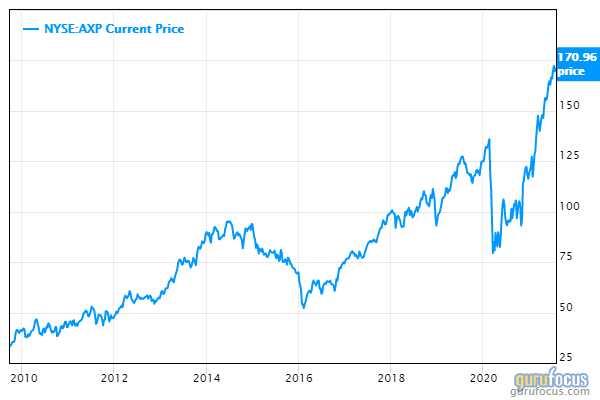 American Express has been in Buffett’s portfolio since 1962, when the infamous Salad Oil Scandal caused the share price to tank. The stock remains one of the equity portfolio’s top holdings to this day with a weighting of 7.93%.

As a financial services stock with one of the largest presences in the U.S. credit market, there are two main things that determine American Express’s profits: how much money people are borrowing via their lines of credit, and their ability to repay the money they borrow. Whenever the economy makes a turn for the worse, American Express’ profits decline, and its stock price follows. When the economy is improving, both the company’s profits and its share price rise.

BIIB, Financial), famous for its treatments for neurological diseases, has gained 36.39% year to date to trade around $331.95 on July 28. Most of this growth was triggered by the Food and Drug Administration's approval of Biogen’s treatment for Alzheimer’s: 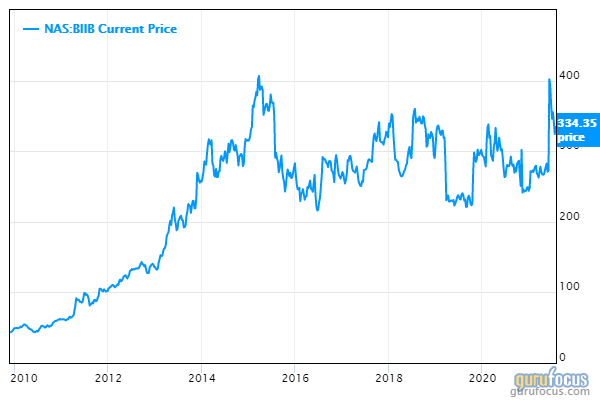 The fourth quarter of 2019 was also when Biogen revived the previously scrapped trials for aducanumab, which targets aggregated forms of Amyloid beta found in the brains of people with Alzheimer's disease, citing that further review of the data revealed that it was effective enough to continue with testing. While the rest of Biogen’s drug lineup is nothing to sneeze at, the big reason to buy it, both in 2019 and now, is the potential of aducanumab. If the drug had not gained FDA approval, the stock might have moved in the opposite direction.

GM, Financial), a major U.S. automaker based in Detroit, Michigan, has gained 32.08% year to date to trade around $55.72 on July 28. The stock has had a breakout year on the back of pent-up automobile demand from the pandemic. 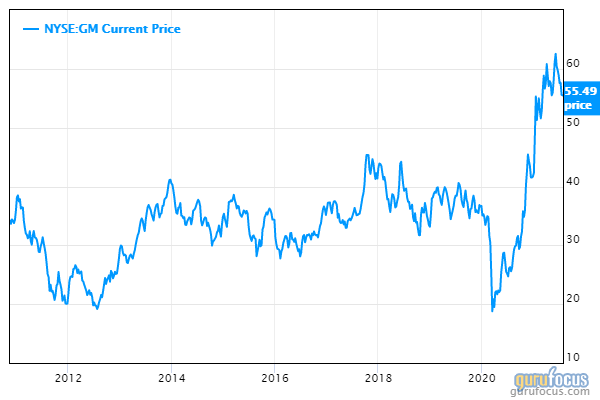 Berkshire’s stake in General Motors showed up in its SEC filings in the first quarter of 2012, just a couple years after the automaker exited bankruptcy. Overall, Buffett has continued to up the stake in this company during the past decade, with a few cutbacks here and there.

The automobile industry has been on a roll this year. Pent-up demand from the pandemic is helping to drive sales, and billions of dollars in electric vehicle investments are also helping the share prices of General Motors and other automakers soar as investors place their bets on who will come out ahead in the race to develop the most popular EVs. However, the ongoing chip shortage will likely result in lackluster results for the second half of 2021.