Book Review: 'The Greatest Trade Ever'

How one man bet against the markets and made $20 billion 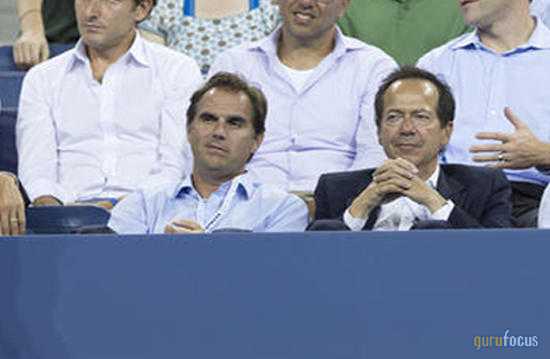 'The Greatest Trade Ever,' by Gregory Zuckerman of the Wall Street Journal, was a book I originally thought had a cheesy title and was probably just another anecdote on the global financial crisis. After picking up the book again recently, however, I saw that Zuckerman had spent 50+ hours interviewing the main protagonist,

John Paulson (Trades, Portfolio), so I decided I should actually read this book, as Paulson's first-hand experience would be clearly expressed.

In the end I could hardly put the book down. Don’t judge a book by its cover! I found the book to be consistent with my experience researching and working in the credit markets in London from 2005 to 2008. The book gets into some detail about mortgage bonds and mortgage derivatives, avoiding the intricacies of the markets and trades, although they are still explained simply and clearly, making it easy to follow without being bogged down with unnecessary detail.

The first chapter is largely just background and could probably be skipped if you are familiar with or not particularly interested in Paulson himself. From there on in, the book picks up rapidly explaining the froth in the housing market and the development of the credit derivative markets and how Paulson's team, along with several other investors including Michael Burry and the head of asset backed securities trading at Deutsche Bank (

For me, the most interesting chapter is Chapter Five because it is the chapter that explains some of the analysis behind the idea generation.

How to short the housing market

Paulson, having been bearish on Countrywide's stock, was looking for a better way to short the property market. His analyst Paolo Pellegrini suggested shorting mortgage backed securities as they would not be prone to takeover risk, or rally on good company news, risks that threatened the shorting of specific stocks. That was the start of the research process around the credit derivatives trades that would end up as “The Greatest Trade Ever.”

Meanwhile at Deutsche Bank, Lippmann, who the author describes as a classic contrarian, was also bearishon the housing markets and asked his analyst Eugene Xu to look at the relationship between housing and various data. Xu found a clear relationship between home prices and mortgage defaults for more than a decade and that other factors such as interest rates, economic growth and employment were also clearly much less important than conventional wisdom assumed. After controlling for population changes and other factors, Xu still found that housing prices alone were the key to mortgage default rates (which are key for the pricing of mortgage backed securities), thus a bearish view on housing markets would translate into a direct and very profitable bearish view on mortgage securities - at a time when the Street, including Deutsche Bank itself, was massively long these investments.

Paulson and Pellegrini had come to their initial view more or less anecdotally, fearing the leverage in the financial system which had been pushing up prices of all types of assets must eventually unwind. When they talked to the Street, the Street claimed their models showed everything was fine. What is clear from this book is that investment banks and brokers relied far too heavily on quantitative models without thinking very hard about the underlying assumptions to those models or realizing that regime changes in the economy would render their models useless.

Paulson had brought credit default swaps (which brought protection against mortgage backed securities defaulting), but after Pellegrini spoke with New Century's CEO, they realized that they had bought protection against mortgage pools where if interest rates went up, homeowners could refinance their mortgages because they had enough positive equity thanks to the prior home price appreciation. In other words, they had bought protection on too old a vintage of securities and realized they needed to buy protection on more recently issued securities where the underlying homeowners had not yet had any home price appreciation to enable them to refinance should interest rates increase. This was a key moment for Paulson and Co.

Pellegrini was still searching for a strong thesis to demonstrate that home prices were indeed overvalued. Eventually he realized that after adjusting for inflation, housing had appreciated 1.4% annually from 1975 through 2000 and then exploded, rising over 7% annually from 2000 through 2005. Pellegrini found that home prices had to correct by 40% just to revert to their trend line fair value, and that historically when home prices returned to trend from above, they always fell through trend, indicating that the current situation was set up for a very big crash in property markets. Now Paulson had some hard numbers to use in their playbook. The hedge fund hired another analyst to help Pellegrini on analysis and they invested in very large databases of mortgage data to figure out what kind of losses could be expected for mortgage securities when house prices dropped by a given amount. They found that if home prices fell just 5%, subprime mortgages would get whacked 17%.

Again the Street dismissed this analysis, claiming that Paulson and Co were not experts and did not know what they were doing. Reading this chapter really highlights the importance of doing your own deep research independently. Obviously, Paulson's hedge fund had the resources to have two analysts work on this full time over several months, buy any data they needed and hire outside consultants to train them in technical details. "The Greatest Trade Ever" was not down to luck.

Going for the jugular

Paulson told his head of research "There's never been an opportunity like this," and Paulson realized that to maximize his success he needed to "go for the jugular" and set up another fund to focus on this trade, bringing in new capital in order to score a huge gain and to propel his fund into the big time.

George Soros (Trades, Portfolio) had greatly influenced Paulson in in this strategy when a great opportunity came along, after Paulson had read "Soros on Soros" (another excellent book which I have recently reviewed for GuruFocus). Paulson realized that mortgage related credit and credit derivatives were hugely mispriced. He decided to get into the trade in the largest possible size.

Michael Burry had been making money with his own bearish view. Yet from this book, it was clear that Burry had a bit of an ego and inferiority complex and was not able to deal with his investors in a way they wanted to be treated. Paulson on the other hand had a quiet confidence and burning ambition to take his firm to the next level. This meant that Paulson was able to raise more money to put to work for his subprime views, but Burry faced client redemption despite having almost exactly the same thesis as Paulson on the markets.

Indeed, Paulson comes across very well in the book, and while the author doesn't shy away from some of the criticisms levelled at Paulson's strategy, I think the tone struck is balanced. When controversial issues arise, both sides of the story are often given.

In the few public appearances

John Paulson (Trades, Portfolio) makes, his demeanour is similar to that which comes across in this book: smart, quiet but confident. It therefore came as a surprise to learn that Paulson was somewhat of a party guy in his younger days. It was only after his private life settled down that he started to realize his true potential.

Another interesting story in the book is that of Jeffrey Greene. This guy was not from Wall Street or the fund management business, but through knowing and quizzing Paulson and doing his own homework and with persistence, an entrepreneurial spirit and the guts to take big risks with his own money, his conviction in the subprime blow-up idea eventually paid off very nicely.

Paulson was a merger arbitrage specialist, but he dared to go off track when analysis led him to a better investment opportunity. Dedicating resources to this opportunity with persistence paid off. Even after speaking with an assortment of supposed experts that disagreed with Paulson's simplistic analysis that a flat home price would lead to difficulties in homeowners' ability to refinance mortgages (which would lead to big losses on the riskiest tranches of mortgage backed securities and their derivatives).

That was only the first part of "The Greatest Trade Ever." After betting against mortgages, Paulson went for the banks. The lesson is that the world and events are inter-connected and joining the dots from one theme to the next can lead to multiple investment wins.

Wall Street and the financial system at large are self-interested with too much consensus thinking. meaning they cannot see the wood from the trees.

We also learn that in managing a hedge fund, even institutional investors (investors in hedge funds) chase returns. Some of them were very uncomfortable with the style drift that Paulson and Burry displayed, as Paulson was a merger arbitrage expert and Burry was a value investor stock picker, even if top quality proprietary research led to very good returns in areas outside of their original mandates.