It's always interesting when a well-known investor makes a "bet the farm" wager on a stock.

Lee Ainslie (Trades, Portfolio)'s hedge fund, Maverick Capital, appears to have done that with Korean e-commerce firm Coupang (CPNG, Financial), putting 42.5% of the firm's common stock equity into the company according to its latest 13F filing (note that 13F filings do not disclose short positions, non-common-stock positions or foreign listings).

Coupang is a South Korean e-commerce company selling apparel, groceries and general merchandise, much like Amazon (

AMZN, Financial) in the United States and Alibaba (BABA, Financial) in China. Its growing rapidly, having recently reported revenue growth of more than 90% in the last 12 months.

Coupang is known for its commitment to customer satisfaction in South Korea. The company is also known for its vast selection of products, logistic excellence and rapid delivery services. South Korea has a very tech savvy and dense population demography with lots of people packed into a small geographical area, so it seems like its potential for achieving high-margin profits and rapid growth is even greater than that of Amazon, which operates primarily in the far less population-dense U.S.

The company's commitment to customer service and vast investments in logistics and supply chain infrastructure have created a moat around the business. Its business model is tailored for densely populated urban areas, and the company is planning to take the model to other Asian cities like Tokyo and Singapore which have similar characteristics. To demonstrate its logistics excellence, Coupang promises to deliver goods for orders placed before midnight by 7:00 a.m. the following day.

Apart from Maverick Capital's large position, investment firm Ballie Gifford also has a significant position in Coupang with more than 35.8 million shares. The Bill and Melinda Gates Foundation Trust also holds more than 5.7 million shares. Obviously these gurus see something in the business model to justify these large investments.

The stock which IPO'ed in March this year but has been dropping steadily ever since. In the IPO, Coupang sold 130 million shares at $35 apiece. The stock opened for trading at $63.50, giving the company a $114 billion market cap. Its currently below $30. 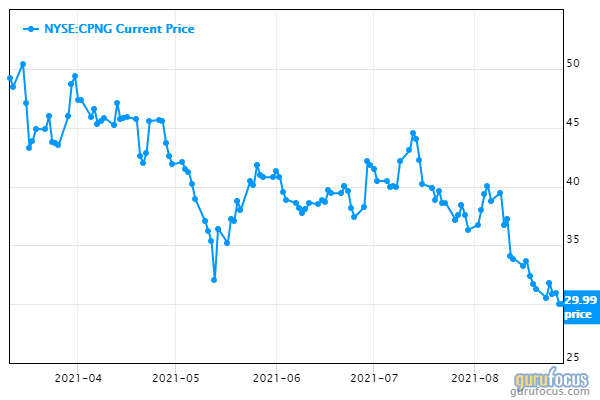 However, it should be noted that we don't know when Maverick's position was established, or at what cost basis. It is possible that the firm could have gotten in at the early pre-IPO stage, like Softbank (

TSE:9434, Financial). In addition, a stock's performance right after it goes public isn't really an indication of where the stock will go in the future. The company has a long road ahead, and investors who are in it for the long term will not be bothered by a short-term price decline.

Coupang is growing its top line amazingly fast, but it's not yet profitable. Its strategy seems to be like Amazon's and Alibaba's - expand its reach, focus on customer service and establish dominance in the market with vast investments and worry about profitability later. It's obviously paid off for other companies that have run the same kind of business.

I/we have no positions in any stocks mentioned, and no plans to initiate any positions within the next 72 hours.
Rating: 3 / 5 (2 votes)
Write for GuruFocus
Submit an article
How to use GuruFocus - Tutorials What Is in the GuruFocus Premium Membership? A DIY Guide on How to Invest Using Guru Strategies GuruFocus New Features