When any team underperforms, it’s usually the manager or coach who gets the axe. The same often holds true in the corporate world. The latest casualty is the founder and long-time CEO of Galapagos NV (

GLPG, Financial), Onno van de Stolpe. He was shown the door in what was characterized as a “retirement” after several research and development flops at the Belgian biotech and a corresponding cratering of its market value.

As recently as early as last year, Galapogos’ stock traded at $270. At Tuesday’s close, the share price was just under $59, up $3.85, evidently reflecting investors’ hopes that a fresh face at the top will get the company back on track.

There are several reasons investors soured on the company. For one, the Food and Drug Administration’s rejection of the company’s drug, Jyseleca, for rheumatoid arthritis over safety issues. This resulted in Galapagos’ partner, Gilead Sciences Inc. (

GILD, Financial), nixing plans to develop the drug in the U.S. and returning its rights in Europe back to the company.

Given these R&D setbacks, it’s little surprise that Piet Wigerinck, Ph.D., is stepping down as chief scientific officer later this year. 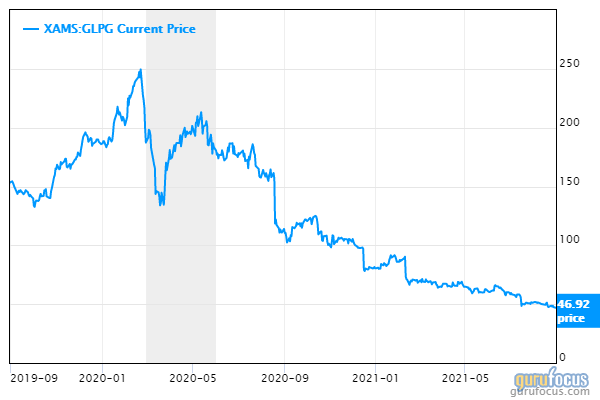 "Though van de Stolpe was well-liked for his humility, integrity and transparency, given the company's recent high-profile setbacks, we expect investors will view the potential for new leadership as an opportunity to bring in fresh perspectives as the company looks to rework their internal R&D processes," RBC's Brian Abrahams wrote.

RBC thinks Galapagos will be more successful in developing drugs for novel diseases with someone at the head with a strong science background.

Since the majority of the company’s pipeline is in the early stages of development, Galapagos may be forced to look for partners with treatments in the latter stages of testing, specifically those aimed at inflammation and fibrosis, according to Jefferies analysts.

However, Jeffries thinks the search for a new CEO could be distracting, diverting the company’s attention away from pursuing licensing arrangements for drugs in the advanced stages of testing.

During a call with analysts to discuss the company’s second-quarter results, President and Chief Operating Officer Bart Filus said 2021 is expected to be Galapagos’ peak year for cash burn, with the number declining in coming years. The company’s cash balance at the end of the quarter was about $6 billion, reflecting a cash burn of about $263 million during the first half of the year.

In the first six months of the year, Galapagos' sales were about $327 million, up 28% from the same period a year earlier. Net loss was reduced by a third to $65 million.

In an April 26 GuruFocus Value calculation, Galapagos was tabbed as being a possible value trap. At that time, its shares were trading at $83.34. The analysis called the company's financial condition fair and its profitability poor. Its growth rank was worse than 82% of the companies in biotechnology industry.

I am/we are Long GILD.
The views of this author are solely their own opinion and are not endorsed or guaranteed by GuruFocus.com
Rating: 0 / 5 (0 votes)
Bookmark