One of the most important things in investing it to ask yourself, "if I’m buying, why is the other side selling?"

Warren Buffett (Trades, Portfolio)’s rule #1 is don’t lose money, and his rule #2 is don’t forget rule #1. This should remind us to think deeply about the alternative point of view. That’s why I find it more useful to read bearish reports than bullish reports.

LSE:ITV, Financial), as I think its business is misunderstood and it is undervalued. It is a value stock by most definitions. ITV is an integrated producer and broadcaster. It creates, owns and distributes content on multiple platforms globally. Within its Broadcast segment, ITV operates a commercial family of channels in the United Kingdom and delivers content through multiple platforms. In addition to linear television broadcast (traditional television), ITV delivers its content on the ITV Hub, catch up services on pay platforms and through direct content deals. Within its ITV Studios segment, ITV is focused on creating and producing programs and formats that return and travel, namely drama, entertainment and factual entertainment.

The argument against ITV is the same as for many media companies. Essentially, it boils down to "You are not Netflix (

NFLX, Financial)” and “your advertising lunch is being eaten by Facebook (FB, Financial) and Alphabet's Google (GOOG, Financial)(GOOGL, Financial).

Dame Carolyn McCall, ITV’s CEO, is driving the group to be digitally led, growing the content-producing ITV Studios business and revenue generated from its on-demand and subscription services, such as ITV Hub and BritBox. This is a necessary strategy because as the UK’s largest commercial network already, there’s not much more market share of the TV advertising market to be had. I myself use ITV Hub to watch the ITV’s News at Ten, the UK’s main nightly news, and before ITV Hub, I didn’t always watch it if I was working late. Now I can watch it away from home.

But the trends facing traditional media are nothing new, and Mr. Market has been doubting whether ITV can execute on a more profitable strategy. ITV’s valuation has been going down for about seven years now.

The argument is that while targeting the video-on-demand market and subscription services makes perfect sense, the issue is that every media company is doing the same thing and competition is fierce.

Then, in terms of advertising, you need good content and ratings, and ITV’s ratings grew only 1% in 2020 when the whole country was stuck indoors under lockdown, then viewing figures started to decline again during the first half of 2021. So the bears say ITV missed an opportunity. I would argue that ratings for online viewings rose in the first half, and of course after lockdowns the nation wants to get out and socialize, so viewing figures would decline for TV. It’s natural there would be a decline in viewing numbers after the lifting of lockdowns.

Advertising trends better than expected over the summer

The company's earnings release for the first half of 2021 states:

"The comparatives are tougher in H2, but we are encouraged by the advertising outlook with July expected to be up 68% and August up 17% to 20% compared to the same period in 2020. It is too early to give a range for September given the current uncertainty but we expect it to be positive...

Our advertising revenues are rebounding from last year with April up 68% and we expect May to be up around 85% and June up between 85% and 90%."

So it’s clear advertising is coming back in the short-term as the UK economy recovers.

ITV’s main TV channel, ITV1, has seen its audience share continually fall since 1990, but audience has stabilized in recent years, picking up from a low of 15% in 2015 to a level of 17.4% in 2021 according to market research firm BARB.

I own ITV because I see that it continues to make significant progress in delivering its "More Than TV" strategy. It is doing this by further growing, strengthening and diversifying ITV Studios internationally with a strong pipeline of scripted and unscripted content and increasingly selling to streaming platforms. It is also accelerating the transformation of the ITV Hub and further rolling out Planet V (the second largest programmatic video advertising platform in the UK, behind Google) to a very positive response. Finally, it is expanding Subscription Video on Demand, with more than 3 million global subscriptions, including 555,000 for BritBox UK, which is up 10% in the past six months.

ITV will do two investor days before year-end, one for Broadcast and one for Studios. As an investor, I hope management provides clear medium term financial targets and more useful disclosures. I'm looking for a breakdown of advertising between linear and on demand, as well as a breakdown of Studios between Subscription Video on Demand and Others.

ITV may never be able to catch Netflix for on demand subscriptions, or match Google for advertising revenue, but it seems we have reached an inflection point where ITV’s management understands the new world of media and is pivoting to remain a significant player. Also, ITV as the UK’s largest TV station recognises the societal impact of its programs. This is good from an ESG standpoint. A good example is the current mental health campaign Britain Get Talking," which has had a positive effect during the pandemic.

ITV’s financial strength is at the medium level. GuruFocus ranks ITV at a level of 5 out of 10 on this front. Would I have a portfolio full of fives? No. Would I have a few fives in my portfolio? Yes. We need some risk to achieve higher returns. ITV is not distressed or in danger of being distressed, it’s just out of favour by Mr. Market. It's a medium risk contrarian play on UK media. 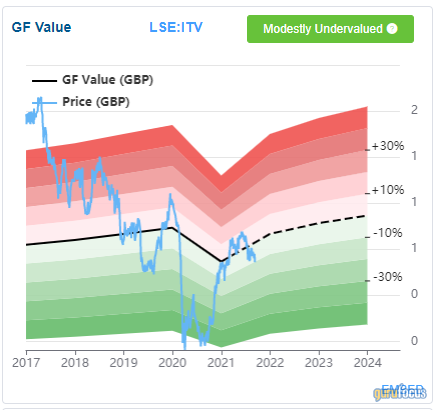 I am/we are Long LSE:ITV
Rating: 5 / 5 (1 votes)
Write for GuruFocus
Submit an article
How to use GuruFocus - Tutorials What Is in the GuruFocus Premium Membership? A DIY Guide on How to Invest Using Guru Strategies GuruFocus New Features