2 Technology Names With Higher Than Usual Returns on Assets

Return on assets (ROA) can be a useful tool to see how efficient companies are at generating earnings using assets. This article will look at two technology companies that have a ROA that is higher than their long-term median, pay at least a 2% dividend yield and are trading near their respective intrinsic values.

HP Inc. (HPQ) was spun off from Hewlett-Packard in late 2015. HP has two primary segments: personal systems, which sells computer and mobile devices, and printers. The company is valued at $32 billion and generates annual revenues of nearly $57 billion.

While HP has not been a standalone entity for very long, the current ROA of 11.7% more than doubles the company’s average of 5.2%. HP has never been as efficient at using its assets to produce earnings as it is right now.

Earnings per share declined 8% overall from 2015 through 2020. Looking closer, we can see that EPS has actually increased each of the past three years despite last year’s negative impact from the Covid-19 pandemic.

HP pays a dividend of 78 cents per share, giving the stock a yield of 2.8% at the current price. According to Value Line, the stock has an average yield of 3% since being spun off. The current yield is just below its average for the past five years. HP has raised its dividend for 10 consecutive years, dating back to being part of its parent company.

Using Friday’s closing price of $28 and expected earnings per share for the year, HP trades with a forward price-earnings ratio of 7.5. This compares to the five-year average multiple of 9.8 times earnings. By this measure, the stock appears attractively priced.

However, the GuruFocus Value chart puts the stock in fairly valued territory.

HP is a relatively young independent company, but its ROA is at a level not yet seen. The company is able to leverage its assets and increase its earnings per share. This shows up in analysts’ estimates for the year. Though the stock is fairly valued using the GF Value, HP’s ROA and historical valuation make the stock look like a decent investment option for those looking for an entry point into the name.

QCOM, Financial) develops and markets integrated circuits for use in voice and data communications. The company’s products are also used in networking, application processing and GPS applications. Qualcomm has a market capitalization of $156 billion and generated revenue of almost $22 billion in fiscal 2020.

After a long drawn-out fight with Apple (

AAPL, Financial) over its licensing royalty business, Qualcomm has seen an uptick in its business. The company has a ROA of 25.4%, which compares extremely favorably with its median score of 13% over the past decade.

Qualcomm’s earnings per share have increased with a CAGR of just 2.7% over the past 10 years. Part of this is due to the company’s disagreement with Apple.

Qualcomm distributes $2.72 of dividends per share, which equates to a 2% yield. Shares have averaged a yield of 2.8% since 2011, so the stock is paying a considerably lower than usual yield. This is the result of sizeable gains in the share price over the past few years. Qualcomm has increased its dividend for 19 consecutive years. 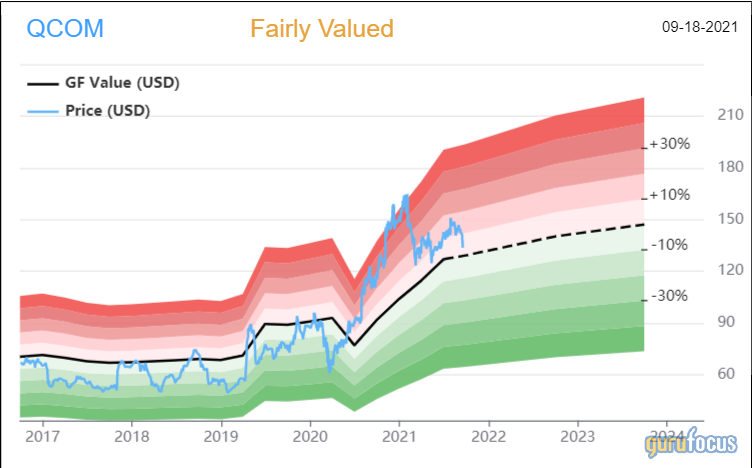 Qualcomm’s business has begun to boom since reconciling with Apple. The rollout of 5G will also be a tailwind to the company as its products are widely used in mobile devices. This has enabled Qualcomm to see a much greater than usual ROA, leading to likely excellent earnings growth both this fiscal year and the next. For investors looking for exposure to 5G, I believe Qualcomm could be a good investment.