3 Highly Profitable Low-Risk Stocks to Own

A look at 3 low-risk names that score well on multiple profitability metrics. 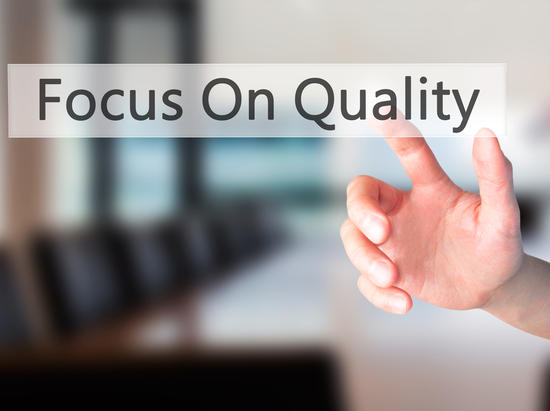 When setting out to construct a portfolio, investors should make sure to add high quality names to their shopping list, especially if they expect their investments to provide income in retirement.

To me, the best stocks to own are those that are of the highest quality. Identifying such investment can be subjective, but fortunately GuruFocus has a ranking system that takes into account a whole host of items when deciding on a risk assessment.

This article will look at three stocks that are considered by GuruFocus to be low-risk, have strong fundamentals and are worth being viewed as a long-term holding. Each stock discussed in this article is highly rated on profitability and has increased their dividend for at least a decade.

JNJ, Financial) is a leading player in the healthcare sector. The company has a diversified business model that consists of three segments: pharmaceuticals, consumer and medical devices. Johnson & Johnson has a market capitalization of $433 billion and generated revenues north of $82 billion in the most recent year. 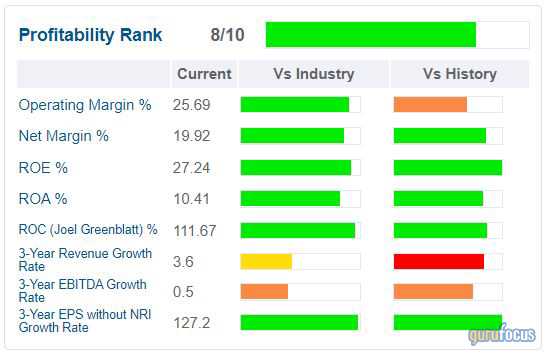 Johnson & Johnson receives an 8 out of 10 rank on profitability according to GuruFocus. The company is near the top end of its industry on nearly every metric. Johnson & Johnson’s best category is the three-year earnings per share without non-recurring items (NRI) growth rate, which outpaces nearly 99% of the 831 companies in the drug manufacturer industry. This is also at the very top of the 10-year median for the company.

Return on capital, return on equity and return on assets beats 96%, 92% and 84% of the peer group. Net margin is impressive in its own right as its current figure is better than more than 91% of the competition. All numbers are also near the top end of Johnson & Johnson’s median performance over the last decade.

If there is a weak spot, it's Johnson & Johnson’s three-year revenue growth, which is below 57% of the peer group and near the low end of the company’s 10-year performance. Operating margin, which is above 91% of the industry, is below the median figure for the time period.

The company’s dividend has increased with a compound annual growth rate (CAGR) of nearly 6% over the last decade. Shares yield 2.6%. While the current yield is below the average yield of 2.9% since 2011, it is also nearly twice that of the average yield for the S&P 500 index.

Johnson & Johnson’s dividend growth streak has survived multiple recessions and business headwinds because leadership so prudently manages its payments. The annualized dividend totals $4.24 and Wall Street analysts expect the company to earn $9.67 per share in 2021. The projected payout ratio is just 44% compared to the 10-year average payout ratio of 48%.

Johnson & Johnson is a favorite amongst the dividend growth investor class because of its diversified business model and its ability to grow its dividend for nearly six decades. It has accomplished this because of its ability to be profitable in all stages of the economic cycle. There are very few names in the market that are as consistent as Johnson & Johnson. For those not yet in the name, the stock looks attractively priced on a historical basis and offers a solid yield. Personally, Johnson & Johnson is one of the largest holdings in my portfolio for these very same reasons.

PG, Financial) is a leading consumer products company. Following a divesting of non-core brands, the company has slimmed its product portfolio from approximately 170 a few years ago to 65 today. Top-selling brands include Pampers, Tide, Gillette, Dawn and Crest. The company is valued at $350 billion and reported revenue of $76 billion for the most recent year. 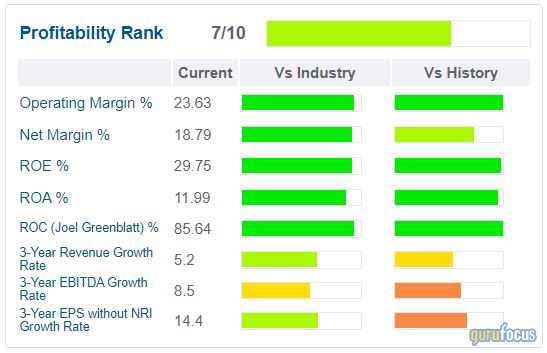 Procter & Gamble scores a 7 out of 10 on profitability. The company blows away the competition on operating margin, outperforming 94.5% of the 1,723 companies in the consumer packaged goods space. This is also Procter & Gamble’s best showing over the last decade.

Three-year revenue growth and three-year earnings per share without NRI are both just below the median performance for the last decade, but Procter & Gamble does top around two-thirds of its peer group on both metrics.

As with Johnson & Johnson, Procter & Gamble has an impressive dividend growth streak of its own at 65 years. The company has also paid a dividend for the last 130 years.

The dividend has a CAGR of just over 5% for the last 10-year period of time. The stock offers a yield of 2.4%. The stock has averaged a 3.1% yield for the last decade, but the current yield does offer a superior payment to that of the market index.

The company’s annualized dividend amounts to $3.48. With analysts predicting earnings per share of $5.92 for the next full fiscal year, Procter & Gamble has an expected payout ratio of 59%. The company has averaged a payout ratio of 62% over the last decade.

Procter & Gamble trades at $144 per share at the moment, giving the stock a forward price-earnings ratio of 24.3. The stock has averaged a multiple of 22.2 times earnings for the last 10 years.

V, Financial) is the largest name in the U.S. electronic payment space. The company offers credit, debit, prepaid and commercial payment platforms. Visa had its initial public offering in 2008. The company is valued at $466 billion and reported revenue of $22 billion for the recent year. 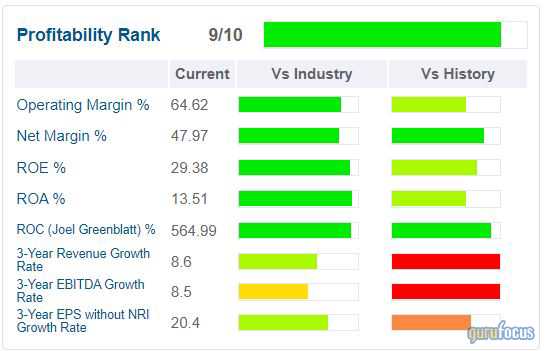 Visa scores a 9 out of 10 in profitability. The company is well above its peer group in most areas. Return on assets, return on capital and return on equity all score better than at least 94% of the 522 companies in the credit services industry. All scores are in the top half of the company’s performance for the past 10-year time period, with return on capital just short of Visa’s best for the time period.

Operating and net margin numbers are better than 84% of the peer group and are near the top end of the period range. Three-year earnings per share without NRI is in the top quarter of peers, though this is near the low end of the long-term range. Revenue growth is above two-thirds of the competition, but this is Visa’s lowest result in the last decade.

As a relatively young company, Visa has a short dividend growth streak going, at least compared to Johnson & Johnson and Procter & Gamble. Still, the company has paid a dividend every year it has been a publicly traded entity, giving Visa 13 years of dividends.

Visa’s annualized dividend stands at $1.28. With analysts looking for $5.82 of earnings per share for the year, the payout ratio amounts to 22% and is close to the 19% payout ratio that Visa has averaged since 2011.

Visa’s ability to outperform much of its industry in revenue and earnings growth while its results are at the low end of its own historical range speaks to the dominant market position that the company possess. The stock has a fairly short dividend growth history when compared to the Dividend Kings discussed here, but Visa’s dividend CAGR is generous even if the yield is lacking. Shares trade with an elevated multiple, but Visa is a premium company worth a premium valuation, in my view. More value orientated investors might shun the name, but those seeking price appreciation and high dividend growth might find Visa appealing despite the valuation.

I am/we are Long JNJ, PG, V
Rating: 0 / 5 (0 votes)
Write for GuruFocus
Submit an article
How to use GuruFocus - Tutorials What Is in the GuruFocus Premium Membership? A DIY Guide on How to Invest Using Guru Strategies GuruFocus New Features