Ford: Building on the Electrifying Debut of the F-150 Lightning 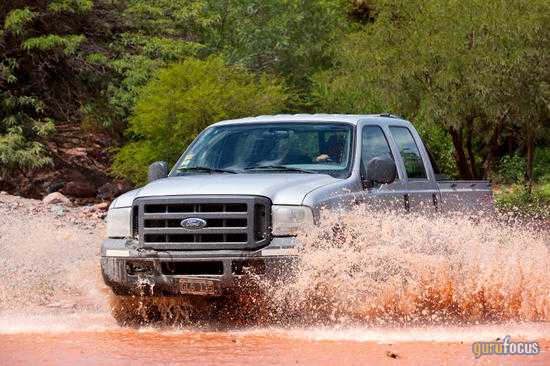 F, Financial) could never have anticipated that the new line of pickup trucks would be so wildly successful that, even 83 years later, it remains almost synonymous with the company's brand.

Now Ford hopes to replicate that staggering success with an all-electric version of the legendary F-150 model, the F-150 Lightning.

A lightning bolt of inspiration

Virtually since its inception, the F-Series – and especially its ever-popular F-150 model – has been viewed as the industry standard for pickup truck performance and quality. The best evidence of that fact may be the F-150’s vaunted status as America’s top-selling vehicle, a position it has maintained for more than three decades running.

Ford has no intention of losing the top spot, despite the automotive world’s rapid move toward electrification. Indeed, Ford has already set an unambiguous course into the electric vehicle future in the form of the F-150 Lightning.

Unveiled to the public in May 2021, the F-150 Lightning immediately turned heads from across the length and breadth of the automotive industry. As I have discussed previously, the EV truck boasts impressive specifications and capabilities, all remarkably well packaged into the familiar F-150 structure and look.

Going electric is a bold move, one that may put Ford’s reputation, and the critically important F-150 brand, on the line as never before.

Catching lightning in a bottle

Ford’s leadership team clearly understands that the F-150 Lightning represents a potential make-or-break moment for the century-old automaker. In an interview with The Drive published Sept. 1, CEO Jim Farley laid out his vision for what he called the “second inning” of the EV revolution:

“I think the demand for F-150 is so robust right now, we really just need to do a great job launching that product. Is it exciting for us, and does it encourage us to make other investments? Yes, absolutely. The most exciting thing for us is this. Most people think of today as kinda the second inning of electric vehicles, the first inning of electric playing out over the last ten years—maybe even the last 100, but the last 10 were most prominent. The next inning that we’re entering, you’ve got vertical integration to bring the cost down to $80 a kWh. People are creating a software driven product, a digital product. There are a lot of things happening differently than in the first inning.”

Truck owners and customers appear to be impressed with what they have seen of the F-150 Lightning thus far, if the more than 150,000 preorders recorded to date are any judge. Indeed, the unexpectedly high preorder volume convinced Ford in August to double its initial production capacity plans.

Ford has already made material progress in its efforts to bring the F-150 Lightning from drawing board to commercial production. The EV pickup truck entered pre-production in September, setting the stage for expansive real-world testing ahead of the Lightning’s full-scale commercial launch next year.

2021 has borne witness to the start of yet another new era for the venerable F-Series. The F-150 Lightning is heir to an impressive legacy, but its worthiness to inherit that legacy will be put to the test. Whether it will succeed or fail remains to be seen, but it seems to me that there is considerable reason for optimism based on the current evidence.

If EVs really are going to be the future of the automotive sector, then Ford has, in my assessment, staked a clear claim on a piece of that future.