Royal Dutch Shell: Buy for the Yield, Hold for the Growth 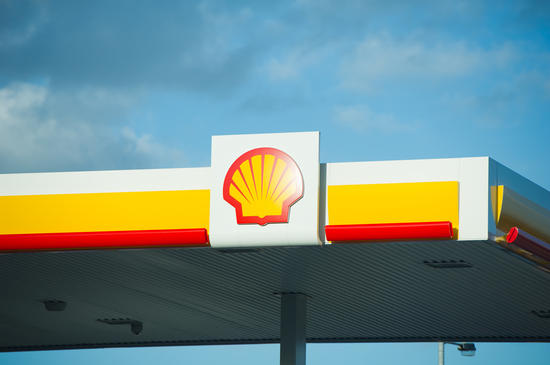 When investors think of the transition from fossil fuels to renewable energy sources, they often consider how difficult and costly this transition could be on oil and gas companies that decide to make the switch. After all, it costs money to build a new business, and oil is still in high demand.

This upfront cost can be a source of worry, but overall, it is better for major oil and gas companies to begin investing in renewable energy now so that they do not see their cash flows dwindle as more clean energy sources are offered by competitors.

Transitioning to renewable energy likely won’t even be an option for many fossil fuel producers. Smaller players in this space that operate on highly leveraged balance sheets will probably continue extracting oil from the ground as long as they can, and when they can’t, they will go out of business. Some of them might provide short-term investing opportunities, but in the long term, their downward trajectory will continue, especially since many investors avoid stocks that operate in what they believe are dying markets.

RDS.A, Financial) (RDS.B, Financial). The British-Dutch company has a stronger balance sheet compared to most of its competitors, and out of all the Big Oil stocks, it seems to be the one of the few that is not dragging its feet on renewable energy. Adding in the solid dividend yield, this company could be a rare long-term opportunity in the struggling energy sector.

As for why Shell was selling those assets in the first place, this is likely due to efforts to speed up the timeline on its transition to renewable energy. Selling those assets for cash gives Shell the estimated equivalent of more than a decade’s worth of cash flow that it would have earned from keeping its Permian Basin stake, which will help fund investments and return cash to shareholders.

Previously, Shell had set a goal to get to net zero carbon by 2050, with interim goals of a 20% reduction by 2030 and a 45% reduction by 2035. However, the company lost a court case in Europe about its environmental impact earlier this year, and the court mandated a target for carbon emission reduction of 45% by 2030.

In a June post, CEO Ben van Beurden said, “For a long time to come we expect to continue providing energy in the form of oil and gas products both to meet customer demand, and to maintain a financially strong company.”

Shell plans to appeal the court decision in order to give it more time to use oil to build up its cash, but even if the company is unsuccessful in this endeavor, it doesn’t seem likely to have too much of a long-term impact on the balance sheet.

With a 15% free cash flow yield, Shell’s cash generation is strong, and while its Altman Z-Score of 1.65 shows the potential for liquidity issues, the Piotroski F-Score of 7 out of 9 is typical of a very healthy financial situation.

GuruFocus rates Shell’s financial strength at 4 out of 10, and the cash-debt ratio of 0.34 is about average for the industry. However, while its financial situation may not be the best, it’s certainly not the worst either. Companies with high leverage and weak cash flows suffer from a more significant downside risk when any type of headwind comes up.

Overall, given Shell’s scale as well as its strong free cash flows and stable balance sheet, the company has several advantages in transitioning to renewable energy that many other competitors don’t have. These advantages should help its operations continue flowing smoothly even as Europe pushes for a faster clean energy transition, which will in turn give Shell (and other major European oil producers) a first-mover advantage compared to other oil majors that are dragging their feet.

Is the dividend safe?

Even though it seems like Shell is on the right path from a sustainability and future growth perspective, can shareholders rely on the dividend yield? As of Sept. 21, Shell’s dividend yield is around 3.64%, which is average for the industry but fairly high compared to the stock market at large. Shell also seems committed to its shareholders, having promised to return $7 billion of the proceeds from its Permian Basin sale to shareholders as dividends.

The company did cut its dividend by a whopping 65% in 2020, though, as the oil industry struggled under the combined weight of a supply glut and the pandemic-induced decrease in demand. While it has raised its dividend twice since the cut, this has brought it up to only 50% of its pre-pandemic level. In comparison, Exxon Mobil (

XOM, Financial) and Chevron (CVX, Financial) maintained their dividends throughout the pandemic and now boast yields of 6.46% and 5.53%.

However, maintaining their dividends has come at a price, as Exxon’s cash-debt ratio is now at 0.06% while Chevron’s is 0.18%. These companies can currently maintain such high leverage largely due to low interest rates in the U.S., but they might struggle if interest rates rise and their profits don’t rise accordingly.

Moreover, while dividends are a great way of returning cash to shareholders, maintaining them during a crisis at the cost of preserving cash for future investments may not always be the best long-term strategy.

Now that the economic situation is improving, Shell should have the flexibility to further raise its dividend. Its free cash flow is similar to Exxon’s, and at a payout ratio similar to Exxon’s, it could grant a yield in the 7% to 8% range. The company is currently targeting 4% annual dividend growth, so it seems like Shell is playing it safe for now in order to avoid having to cut its dividend again in the case of another crisis, but it could go higher if it gains more confidence in its transition strategy.

With a price-earnings ratio of 30.18, Shell is trading at a higher valuation than average for the oil and gas industry at large. However, it is cheaper when compared to most of the other Big Oil companies. ConocoPhillips and Chevron, for example, both trade at price-earnings ratios upwards of 50.

Based on earnings estimates from Morningstar analysts, Shell has a forward price-earnings ratio of 7.48 compared to 11.4 for ConocoPhillips, 10.75 for Exxon and 14.1 for Chevron. The GuruFocus Value chart rates the stock as fairly valued. 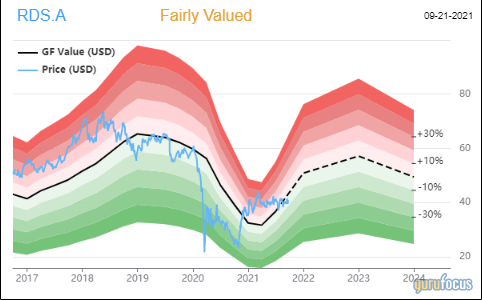 The market also could be undervaluing Shell’s assets. With the largest retail franchise in the industry, Shell’s 46,000 service stations could be worth as much as $40 billion on their own, assuming a valuation of 10 times earnings for 2020.

All things considered, Shell seems to be trading at a discounted valuation compared to its peers in Big Oil due to a combination of Europe pushing for a faster transition to renewable energy, the 2020 dividend cut and unfavorable comparisons with other oil giants that are taking on higher leverage and not spending as much to lessen their negative impact on the environment.

Additionally, when it comes to the transition to renewables, Shell certainly doesn’t have the market cornered. There are many smaller renewable energy companies, and BP PLC (

BP, Financial), a fellow European oil giant, has an equally ambitious clean energy plan as well as a higher dividend yield of 5.06%.

While BP also seems a promising investment that is willing to pay a higher dividend yield at the moment, Shell could still be the better long-term growth play, since its scale advantage and retail network give it a leg up in rolling out new clean energy projects. Its strong cash flow and lower payout ratio leave more room for dividend growth as well.

I/we have no positions in any stocks mentioned, and no plans to initiate any positions within the next 72 hours.
The mention of stocks in this article does not at any point constitute an investment recommendation. Investors should always conduct their own careful research and/or consult registered investment advisors before taking action in the stock market.
Rating: 5 / 5 (2 votes)
Write for GuruFocus
Submit an article
How to use GuruFocus - Tutorials What Is in the GuruFocus Premium Membership? A DIY Guide on How to Invest Using Guru Strategies GuruFocus New Features