A look at 3 names with a high return on invested capital. 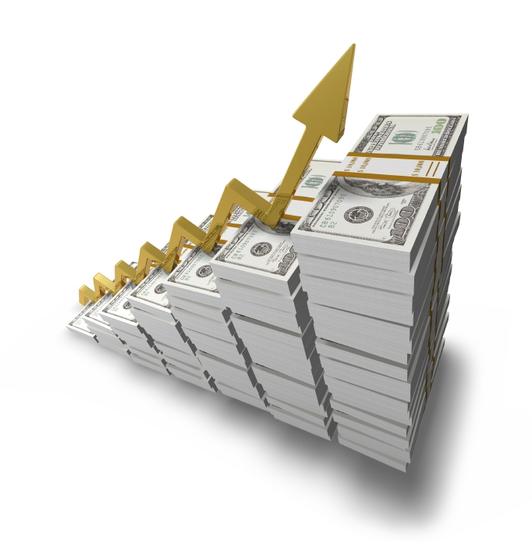 Companies with a high return on invested capital (ROIC) are those that are most efficient at extracting profits from invested dollars. With profits driving share prices, investors would be wise to identify and purchase shares of companies with excellent ROIC, in my opinion.

Investors should also consider the company’s weighted average cost of capital (WACC). A lower WACC means that the costs of financing a company’s operations and investments are low. If the WACC is higher than the ROIC, then the company is destroying value as opposed to creating it.

For example, if a company has an ROIC of 10% and a WACC of 5%, then it is producing 5 cents of value for every dollar that it invests.

In this article, we will look at three companies with a five-year median ROIC of at least 25% and a WACC of less than 10% to see if they can be purchased at the current price. Each of these companies also pays a dividend.

ACN, Financial) offers services such as consulting, outsourcing and technology solutions. The company supports a wide range of customers, including banks and other financial corporations, communications and media companies, healthcare, retail and travel. Accenture has a market capitalization of $213 billion and generates annual revenues in excess of $44 billion.

Accenture has a five-year median ROIC of 31.7% and a WACC of just under 7%. This means that the company is creating nearly 25 cents of value for every dollar that it invests back into its business. There are just a few companies out of more than 2,000 in the software industry that can offer superior value creation.

Solid earnings growth rates have allowed the company to return capital to shareholders in the form of dividends, which Accenture has increased for 10 consecutive years. Shares yield 1% today, exactly half of the long-term average. The dividend has increased 13.5% annually since 2011.

The ability to create value and raise the dividend at a double-digit rate hasn’t gone unnoticed by the market. The stock trades at $311 today. Wall Street analysts expect $8.79 this fiscal year, implying a forward price-earnings ratio of almost 38 times earnings. For context, Accenture has a 10-year average price-earnings ratio of less than 20.

The GuruFocus Value also says that Accenture is overvalued. 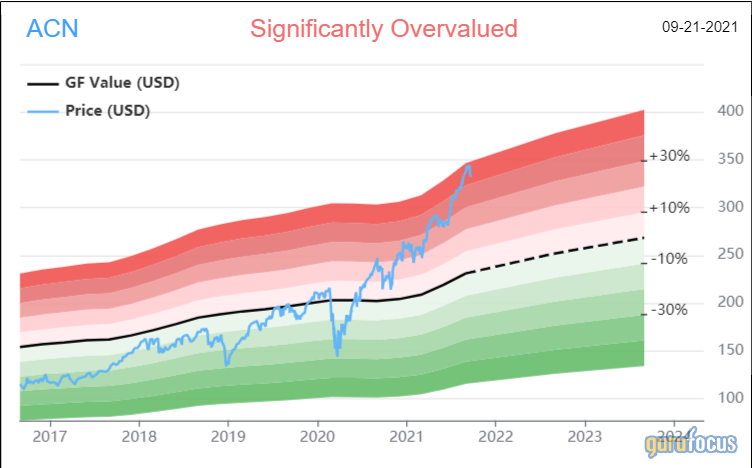 With a GF Value of $232.11, Accenture has a price-to-GF-Value ratio of 1.43. Shares would have to retreat 30% to trade with their GF Value. The stock earns a rating of significantly overvalued according to GuruFocus.

When it comes to creating value at a high rate, Accenture is near the top of its extremely large industry. The company also has a solid dividend growth streak going and a double-digit growth rate for the last decade. This comes at a price and is a likely reason for the sizable premium that the stock trades with compared to both the historical valuation and the GF Value. At a lower level, Accenture could make an attractive long-term investment.

DPZ, Financial) operates the largest pizza delivery business in the U.S. The company has nearly 17,300 franchised locations and 363 company owned stores spread over 90 different countries. Domino’s annual revenues total just over $4 billion and the company is valued at $18.3 billion.

Domino’s has an incredibly impressive five-year median ROIC of 61.7% compared to a WACC of just 4.2%. For every dollar invested, almost 58 cents of value has been created. The restaurant with the next best value creation that meets the minimum requirements for this article is Yum Brands Inc (

YUM, Financial), which has created 21 cents of value for every dollar invested.

Knowing this, it's not surprising that Domino’s has an earnings per share growth rate of 22.1% since 2011. The growth rate actually accelerates looking at the near term, as the earnings CAGR reaches almost 24% over the last five years. A CAGR of 20%+ is very difficult to maintain over the long-term, but Domino’s has managed to perform better more recently,which is a rare feat, especially in the restaurant industry.

Domino’s suspended its dividend from 2007 through 2012. The company did reinstate its dividend in 2013 and has raised its every year since. Shares yield just 0.8% compared to the average yield of 1.1% since the company restarted its dividend. Investors likely don’t own the name for its dividend as the share price has risen more than 226% over the last five years. Still, the dividend has a CAGR of 15.5% over the last half-decade.

At the moment, Domino’s stock trades at $498. With analysts projecting earnings per share of $13.66 this fiscal year, Domino’s trades with a forward price-earnings ratio of 36.5. The multiple has expanded recently and has a 10-year average of 26.6 times earnings since 2011, but a five-year multiple of 30.3 since 2016. 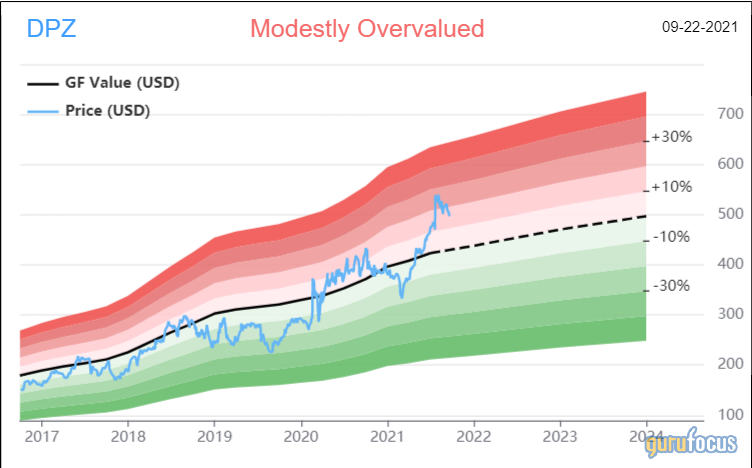 Domino’s is a rare name in the restaurant industry that is creating high levels of value for its shareholders. No other name comes close to matching the ROIC that the company is producing. The stock doesn’t offer much in the way of income, but it is definitely a high growth name. The stock isn’t too far off its medium-term average multiple and trades with a slight premium to its GF Value. Investors looking for exposure to the restaurant industry as well as growth could find Domino’s a tempting pick.

HD, Financial) is the largest home improvement retailer in the U.S. The company also has operations in Canada and Mexico and boasts a total store count approaching 2,300. Home Depot is valued at $350 billion and has annual sales of $132 billion.

Home Depot has a ROIC of 31.7% compared to a WACC of 7%, equating to almost 25 cents of value created for every dollar invested. Of the companies in the retail cyclical industry that meet the criteria for this article, only Ross Stores Inc (

Earnings per share have a CAGR of 17%, an excellent rate of return for a company that can be considered fairly mature.

Dividend growth has corresponded with strong earnings growth over the long-term. Shareholders have seen a dividend CAGR of 19.2% since 2011. Home Depot did pause its dividend in both 2008 and 2009 as the company dealt with the impact of the economic downturn of that time period. The company has increased its dividend for 12 consecutive years. The stock yields 2%, falling just short of its 10-year average yield of 2.3%, but easily topping the average yield 1.3% for the S&P 500 index.

Shares of Home Depot trade at $334. Using analysts estimates of $14.56 for the year, the stock has a forward price-earnings ratio of 22.9. Home Depot has averaged a 19.7 times earnings multiple since 2011, so the stock isn’t especially expensive against its historical multiple.

The story is the same when considering the GuruFocus Value chart. 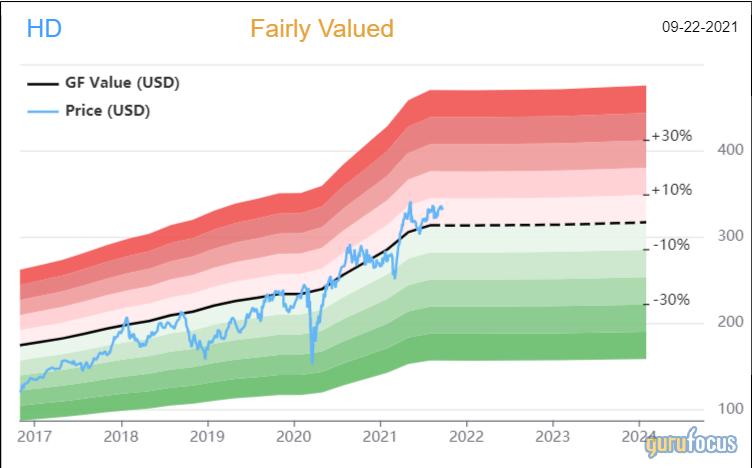 Home Depot has a GF Value of $313.33, which results in a price-to-GF-Value ratio of 1.07. The stock would have to fall 6.2% to trade with its GF Value. Shares earn a rating of fairly valued as a result.

Home Depot’s value creation trails just a few names in its industry. Its ability to turn invested dollars into profit has shown over a long period of time and a double-digit earnings CAGR for a company of Home Depot’s size is telling of its high-quality nature. Dividend growth comes in better than earnings and the yield is just below its 10-year average. The stock isn’t especially expensive, so I would consider adding the name even at the current price.

I am/we are Long HD
Rating: 0 / 5 (0 votes)
Write for GuruFocus
Submit an article
How to use GuruFocus - Tutorials What Is in the GuruFocus Premium Membership? A DIY Guide on How to Invest Using Guru Strategies GuruFocus New Features