Companies that are financially strong tend to be leaders in their respective industries. This leadership position often enables them to navigate multiple recessions better than their peer group, which also makes it likely that they will have lengthy dividend growth streaks.

When it comes to constructing a portfolio, I believe investors should focus on owning shares of companies that are at or the near top of their industry, measure very well on at least several financial metrics and have long histories of dividend growth.

I will focus on two companies that are rated very highly on financial strength according to GuruFocus and have paid a dividend for at least 25 consecutive years.

BMI, Financial) manufacturers and markets the meters and valves used to measure and control the flow of liquids, such as water and oil. The company’s products are also used in the control of the flow of air and other gases. The nearly 125-year-old company has annual revenue of $425 million and is valued at just under $3 billion today. 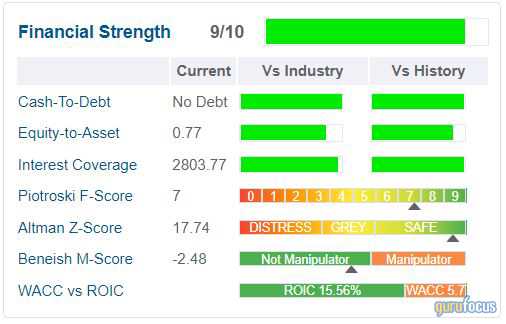 Badger Meter receives a 9 out of 10 rating on financial strength from GuruFocus. One item that goes a long way in driving this score is the company’s lack of debt. In fact, the company has no debt, putting Badger Meter cash-to-debt ranking ahead of 99.9% of the 2,655 companies in the industrial products industry.

The company also scores well on interest coverage, topping 96% of its peer group and coming in at the high end of the company’s 10-year range. Equity-to-asset beats 84% of the competition and is close to Badger Meter’s best showing from the last decade.

The company’s Altman Z-score, which is a formula used to determine if a manufacturing company is headed toward backruptcy, rates the company as very safe. Badger Meter’s return on invested capital versus the weighted average costs of capital shows the company is creating value from its investments in its business. The Piotroski F-score, which measures the financial strength of a company, is on the higher end for Badger Meter.

With such strong rankings across a variety of financial metrics, it is no surprise that Badger Meter has seen its earnings per share increase with a compound annual growth rate of 12.1% for the 2011 to 2020 time period.

This growth in profitability has coincided with high rates of dividend growth. Following a 11.1% increase for the Sept. 10 payment, Badger Meter has increased its dividend for 29 consecutive years. The most recent raise is above the dividend’s CAGR of 8.8%. Shares yield just 0.8% versus the 10-year average yield of 1.3%. The expected payout ratio is healthy 41% and in line with the decade-long average payout ratio of 40%.

Alas, the market understands the strength of Badger Meter’s financial position and has bid shares up accordingly. Shares trade hands around $102 at the moment. Wall Street analysts expect the company will earn $1.97 per share in 2021, implying a forward price-earnings ratio of almost 52. Badger Meter has rarely been a cheap stock with a five- and 10-year average price-earnings ratio of 34.2 and 30.6. Still, the stock has rarely, if ever, been this expensive.

The same goes for the stock’s intrinsic value, or the GF Value, as measured by GuruFocus. 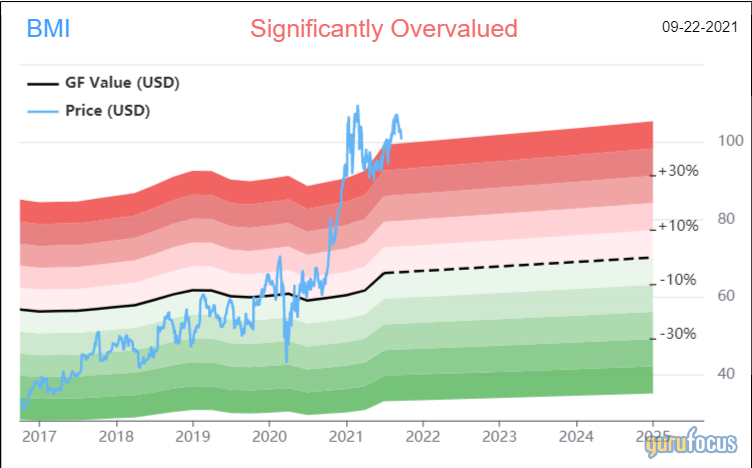 The company has a GF Value of $66.41, leading to a price-to-GF Value of 1.54. The stock would need to retreat almost 35% to reach the GF Value. Shares are rated as significantly overvalued.

Badger Meter is the type of stock I would very much like to own at the right price. The company is the top name in its industry and has leading scores on several financial metrics. The company is also debt free and has nearly three decades of dividend growth. However, at the current price, I would avoid purchasing the stock due to valuation concerns. At a cheaper multiple, Badger Meter would be more enticing.

BRC, Financial) manufactures and markets specialty materials. The company has two distinct business segments: Identification Solutions and Workplace Safety. The company has a market capitalization of $2.6 billion and generates annual revenue of $1.1 billion. 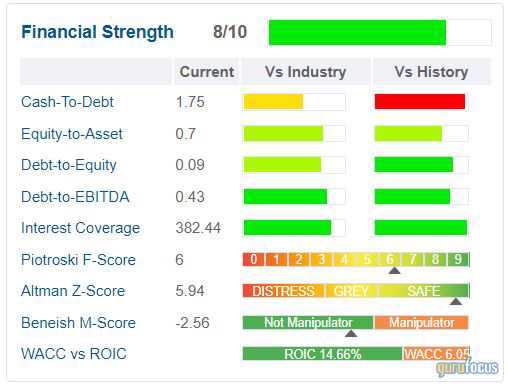 Brady receives an 8 out of 10 rating on financial strength from GuruFocus. The company doesn’t score as well against its peers as Badger Meter, but still holds its own in a number of areas. Its best showing is in interest coverage, which is better than 86% of the 734 companies in the business service industry. This is also Brady's best showing over the last decade.

Debt-to-Ebitda ranks ahead of 82% of the peer group and is one of the company’s lowest figures from the last 10 years. Debt-to-equity and equity-to-asset are better than approximately three-quarters of the competition and near the top of the long-term results.

Brady also has a very safe Altman Z-score, though its Piotroski F-score is more middling than I would like to see.

The company’s weakest area is on its cash-to-debt ranking, which is only better than 58% of the industry group. Even worse, this is close to the lowest score since 2011.

Brady has increased earnings per share at a rate of 9.5% over the last decade, a testament to the company’s strength of its business.

This hasn’t translated to high dividend growth, however, as the company’s dividend has a CAGR of just 1.7% during this period of time. After a 2.3% increase for the upcoming Oct. 29 payment date, Brady has now extended its dividend growth streak to 36 years. Shares have a yield of 1.8%, which is below the long-term average of 2.4%. With an annualized dividend of 90 cents and expected earnings per share of $3.17 for fiscal year 2022, Brady has a projected payout ratio of 28%, much improved from the 10-year average payout ratio of 46%.

Shares trade hands at around $50 at the moment, giving the stock a forward price-earnings ratio of 15.8. This is below the long-term average multiple of 19, so the stock looks inexpensive on a historical basis. 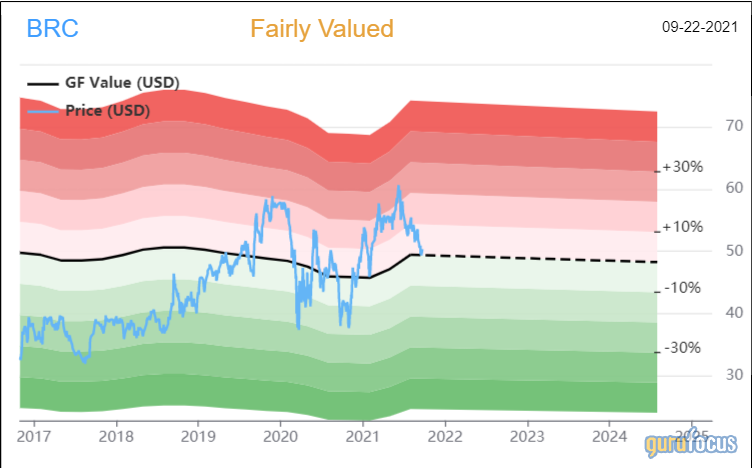 Brady has a GF Value of $49.40, giving shares a price-to-GF Value of 1.01. According to GuruFocus, the stock is fairly valued at the moment.

Brady may not have Badger Meter’s financial strength, but it does fair well against its peer group in several areas. The company also boasts a strong earnings growth rate for the last decade and its dividend growth streak is impressive, even if the annual increases are minimal. Investors looking for a safe and secure dividend backed by a solid financial position might find a name like Brady attractive.