This industry is a highly cyclical, but there are several names that are financially strong and offer attractive returns 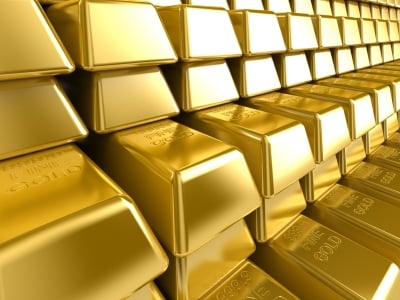 The metals and mining industry is one of the most cycle in the market as a company’s performance often depends on items outside of its control, such as the price of metal and how much can be mined from the ground.

For these reasons, it behooves investors interested in this space to seek out only the most financially stable companies to purchase. I will examine three names in the metal and mining industry that receive high scores on financial strength from GuruFocus.

All three names discussed have business models that focus on metal royalty, metal streaming or both. This means that they do not own mines or engage in exploration. The companies have agreements to buy metals from mines at certain prices, allowing them to avoid some of the volatility with precious metal pricing.

FNV, Financial) is a royalty and stream company that is focused primarily on gold and other precious metals. The company also has an oil and gas business, but it targets 80% of revenue from previous metals. Franco-Nevada has a market capitalization of $26.5 billion and annual revenue of just over $1 billion. 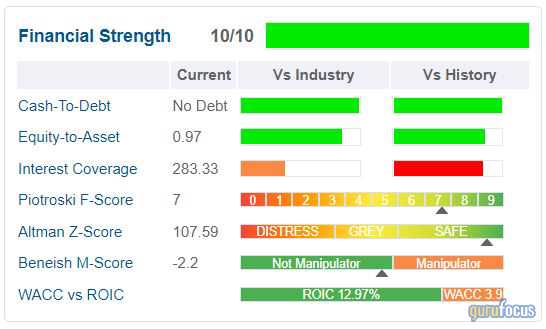 Franco-Nevada receives a perfect score of 10 out of 10 for financial strength. No doubt a prime driver of this score is the company’s lack of debt, which separates it from nearly 100% of the almost 2,400 other names in the metal and mining industry. The equity-to-asset ratio tops more than 85% of the peer group and is close to a 10-year high for the company.

Return on invested capital is approaching 13%, while the weighted average cost of capital is under 4%. This means that for every dollar invested, Franco-Nevada is creating more than 9 cents of value. This is the highest value creation of the stocks discussed.

Franco-Nevada’s Altman Z-score, which is a formula used to determine if a company is likely to face backruptcy, is well in the safe zone and almost near the top. The company’s Piotroski F-score, which measures the financial strength of a company, is also at the high end.

On the other hand, interest coverage is very weak, coming in worse for Franco-Nevada than 63% of peers. This is also on the low end of the 10-year performance.

An investor might suspect that a company’s earnings growth would be robust with such a strong financial position, and they would be correct in this case. Franco-Nevada’s earnings per share have increased with a compound annual growth rate of 16.2% over the last decade, which is the highest growth rate among the stocks discussed.

Like many metal and mining companies that pay a dividend, shares of Franco-Nevada have a small yield of 0.9%. The current yield is lower than the stock’s average yield of 1.3% since 2011. Franco-Nevada has a 13-year dividend growth streak going and a dividend CAGR of almost 9%.

The yield might be small, but the dividend appears well protected. With an annualized dividend of $1.20 and expected earnings per share of $3.56 for the year, according to analysts surveyed, Franco-Nevada has a projected payout ratio of just 34%. This compares favorably to the 10-year average payout ratio of 75%.

Shares of the company look undervalued according to GuruFocus’ measure of intrinsic value. 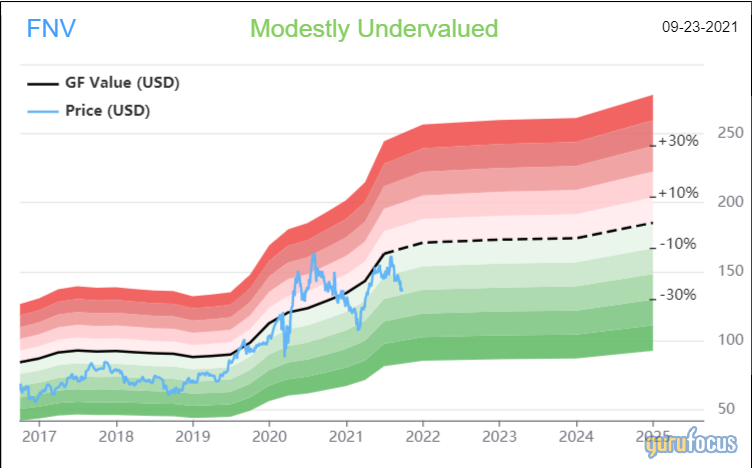 Franco-Nevada trades hands at $134. With a GF Value of $166.55, the stock has a price-to-GF Value ratio of 0.81. Shares could return 24.3% if they were to trade with their GF Value. Shares are rated as modestly undervalued.

The company has a pristine balance sheet, which includes no debt. Franco-Nevada scores well on a variety of other metrics, which is why it earns a perfect score on financial strength. The company’s business model also limits the risks it is forced to take as the company owns no mines and does no exploration. Shares appear undervalued and could offer mid-20% returns. Investors looking for a high upside name in the metals and mining industry should consider buying the stock. 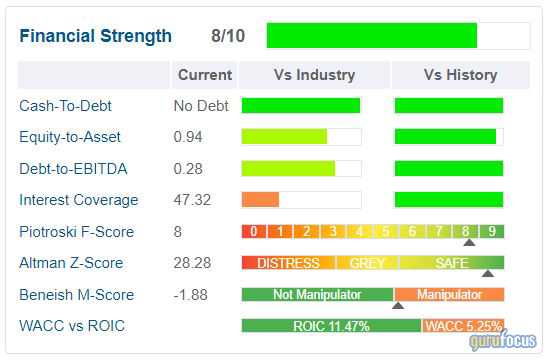 Royal Gold also receives a very high score on financial strength, receiving an 8 out of 10. As with Franco-Nevada, Royal Gold carries no debt on its balance sheet, putting the company at the high end of its industry.

Debt-to-asset and equity-to-asset scores top 78% and 72% of the peer group, respectively, and are among the best numbers seen for either metric in the last decade.

The Altman Z-score tells us that Royal Gold is highly unlikely to have to declare bankruptcy and the Piotroski F-score gives the company a very high score on financial strength.

As with Franco-Nevada, Royal Gold has a weak interest coverage score, one that is worse than two-thirds of its industry peers. That said, this is the top score in the last 10 years.

Royal Gold’s ROIC of 11.5% and WACC of 5.3% mean that the company is generating 6.2 cents of value for every dollar that it invests back into its business. Not as robust as the other names discussed, but still solid value creation for the industry.

The company's earnings history is quite choppy. Overall, earnings have a CAGR of 6.4% for the 2011 to 2020 time period. However, earnings growth on a year-to-year basis has been inconsistent so much so that the company hasn’t put more than two consecutive years of bottom-line growth together since the years directly following the Great Recession.

And yet, Royal Gold has managed to increase its dividend for 20 consecutive years, one of the longest dividend growth streaks in its industry. The dividend has a CAGR of 10.2% since 2011.

With an annualized dividend of $1.20 and a current share price of $102, Royal Gold has a yield of 1.2%. This matches the 10-year average yield that the stock has offered. Analysts expect the company to earn $4.18 this year, resulting in a projected payout ratio of 29%, which is well below the 67% payout ratio that Royal Gold has averaged since 2011.

The stock looks even cheaper than Franco-Nevada. 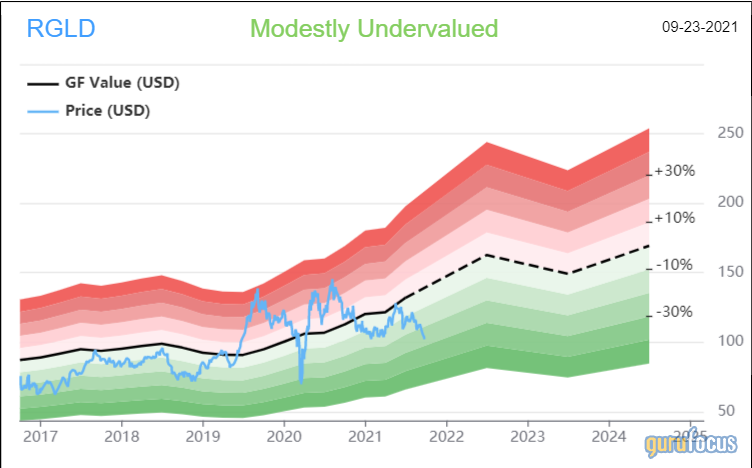 The stock has a GF Value of $138.90. Using the most recent price, the stock has a price-to-GF Value ratio of 0.73. Shareholders could be in line for a 36.2% return from current levels if the stock were to reach its GF Value. Shares are rated as moderately undervalued.

Royal Gold’s earnings growth lacks consistency, but the company is on very firm financial ground. The company is debt free and leads its industry in several other areas. The company has a long history of dividend growth and a double-digit dividend CAGR over the last 10 years. The payout ratio is healthier than it has been in more than a decade. For investors who can stomach the varied earnings growth, Royal Gold could provide excellent returns going forward.

WPM, Financial) is the largest metal streaming company in the world. It focuses on silver and gold primary, but also has agreements to purchase cobalt and palladium. The company has 25 agreements with 19 different mining companies in 11 countries. The company has a market capitalization of $18.6 billion and annual revenue approaching $1.1 billion. 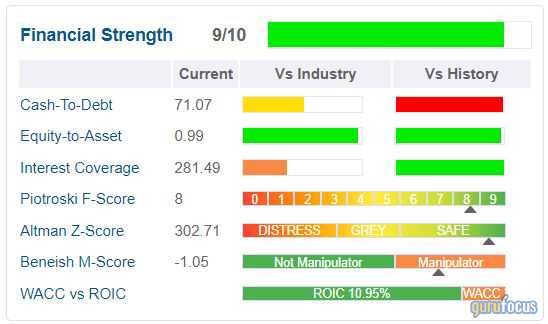 Wheaton scores a 9 out of 10 on financial strength. The company’s best showing is on equity-to-asset, which beats out 97% of the competition. This is also the best result for the company in the last decade.

The company’s ROIC and WACC scores show Wheaton is seeing 9 cents of value creation for every dollar invested into the business. This isn’t as high as Franco-Nevada, but still a decent return on investment.

Cash-to-debt is just about in the middle of the pack for the industry. It is also near the very low end of the long-term range for the company.

Dividend growth has also been rocky during this period of time. The dividend was cut almost in half in 2014 before being reduced another 23% in 2015. Growth resumed the following year before being paused in 2019. Wheaton currently owns a two-year dividend growth streak. Despite the stops and starts, the company’s dividend has a CAGR of 8.8% over the last decade.

Wheaton’s annualized dividend of 60 cents per share works out to a 1.5% dividend yield using share price of $40. For context, the stock’s average yield since 2011 is 1.3%. With analysts calling for earnings per share of $1.48 for 2021, the expected dividend payout ratio is 41%. Long term, the payout ratio has averaged 41% as well.

The stock doesn’t offer as much return potential as the other names listed here, but does provide the opportunity for solid gains nonetheless. 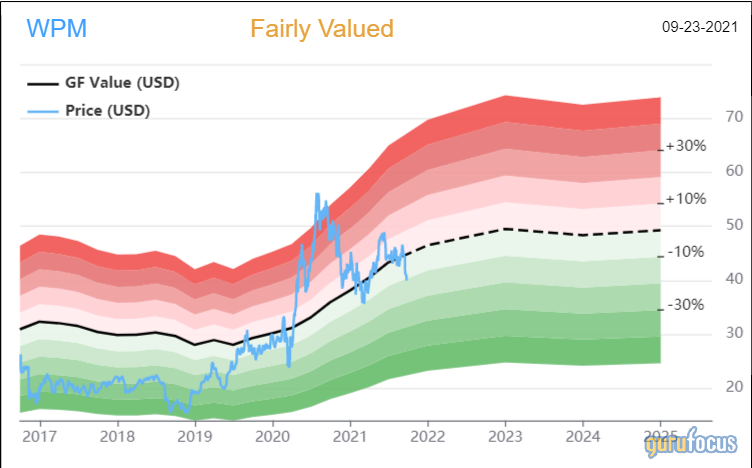 Wheaton has a GF Value of $43.31, giving the stock a price-to-GF Value ratio of 0.92. Reaching the GF Value would reward shareholders with a return of 8.3%. Factor in the dividend yield, and the total return could be almost 10%. Shares are rated as fairly valued.

The company appears to be in very strong financial health despite a very uneven earnings growth history. The dividend yield is the highest of stocks discussed and Wheaton is the only name to offer a higher-than-usual yield at the moment. The dividend has been cut and paused several times since 2011, but strong overall for the last 10 years. Those looking for more total return might choose a different name, but those seeking income could find Wheaton attractive.

I/we have no positions in any stocks mentioned, and no plans to initiate any positions within the next 72 hours.
The views of this author are solely their own opinion and are not endorsed or guaranteed by GuruFocus.com
Rating: 5 / 5 (1 votes)
Write for GuruFocus
Submit an article
How to use GuruFocus - Tutorials What Is in the GuruFocus Premium Membership? A DIY Guide on How to Invest Using Guru Strategies GuruFocus New Features