These stocks could offer good value to investors 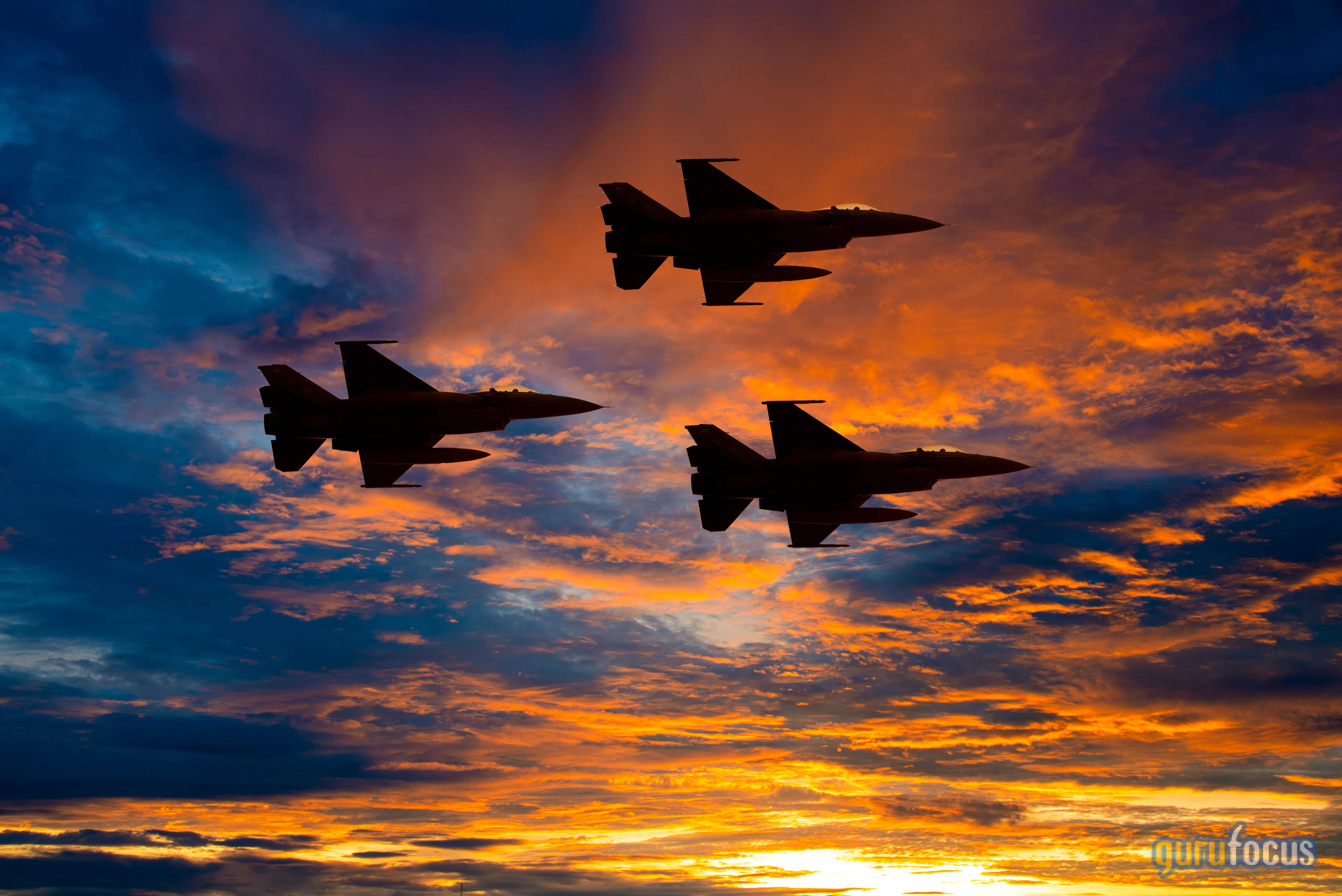 SPCE, Financial), who are striving to get ahead in taking ordinary citizens to “the final frontier,” and rising geopolitical tensions between the U.S. and the Middle East, Asia and even France have increasingly shifted investors’ focus to the aerospace and defense sector.

While there are many startups in this industry vying to get a slice of the market share pie, investors may be interested in finding opportunities among established companies that are undervalued and have histories of predictable earnings and revenue growth.

As of Sept. 23, the GuruFocus All-in-One Screener, a Premium feature, found aerospace and defense companies that were significantly undervalued to fairly valued based on the GF Value and had a predictability rank of at least two out of five stars were Northrop Grumman Corp. (

The Falls Church, Virginia-based company is one of the world’s largest weapons manufacturers and military technology providers. Its products range from aircraft, combat vehicles and spacecraft to cybersecurity systems and radars.

Trading with a GF Value of $374.29 and a price-to-GF Value ratio of 0.94, the stock appears to be fairly valued currently based on historical ratios, past performance and future earnings projections. 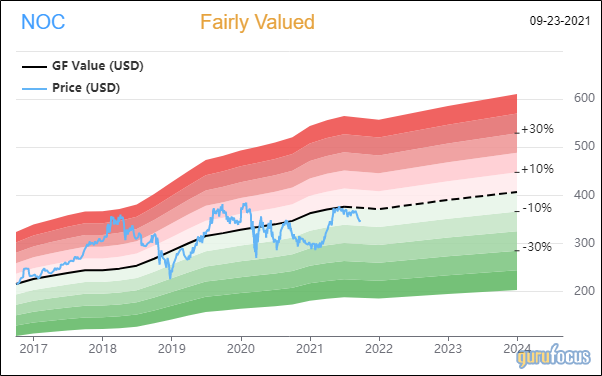 The valuation rank of 6 out of 10, however, leans more toward undervaluation since the share price and price-book ratio are both approaching multiyear lows.

GuruFocus rated Northrup Grumman’s financial strength 5 out of 10. Despite having adequate interest coverage, the Altman Z-Score of 2.96 indicates the company is under some pressure since assets are building up at a faster rate than revenue is growing. The return on invested capital, however, overshadows the weighted average cost of capital, suggesting value is being created as the company grows.

The company’s profitability scored a 9 out of 10 rating. Although the operating margin is declining, it is supported by strong returns on equity, assets and capital that outperform a majority of competitors. Northrup Grumman also has a moderate Piotroski F-Score of 6 out of 9, meaning business conditions are typical for a stable company. Consistent earnings and revenue growth contributed to a 4.5-star predictability rank. According to GuruFocus, companies with this rank return an average of 10.6% annually over a 10-year period.

Of the gurus invested in Northrop Grumman,

The company, which is headquartered in Reston, Virginia, manufactures everything from Gulfstream business jets and combat vehicles to nuclear-powered submarines and communications systems. 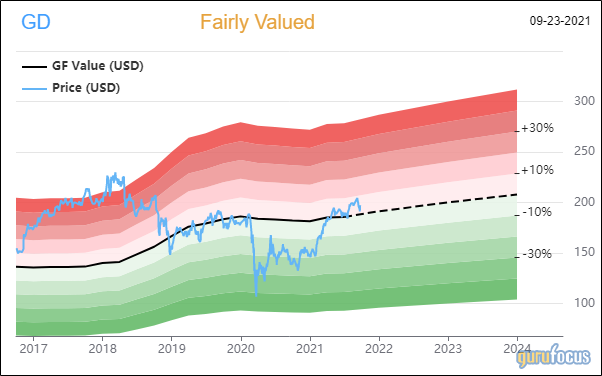 The valuation rank of 6 out of 10 points to undervaluation even though its share price and price-sales ratio are closing in on multiyear highs.

General Dynamics’ financial strength was rated 5 out of 10 by GuruFocus. In addition to sufficient interest coverage, the Altman Z-Score of 3.03 indicates the company is in good standing despite the fact its assets are building up faster than revenue is growing. The ROIC also slightly eclipses the WACC, indicating value creation is occurring.

The company’s profitability fared better, scoring a 7 out of 10 rating. Even though margins are declining, General Dynamics is supported by returns that outperform a majority of industry peers as well as a moderate Piotroski F-Score of 5. Regardless of a slowdown in revenue per share growth over the past 12 months, the company has a three-star predictability rank. GuruFocus says companies with this rank return, on average, 8.2% annually.

With a 0.88% stake, Barrow, Hanley, Mewhinney & Strauss is the company’s largest guru shareholder.

The Newport News, Virginia-based company is the largest military shipbuilder in the U.S. It also provides professional services to partners in government as well as its industry.

Based on a GF Value of $237.11 and a price-to-GF Value ratio of 0.81, the stock appears to be modestly undervalued currently. 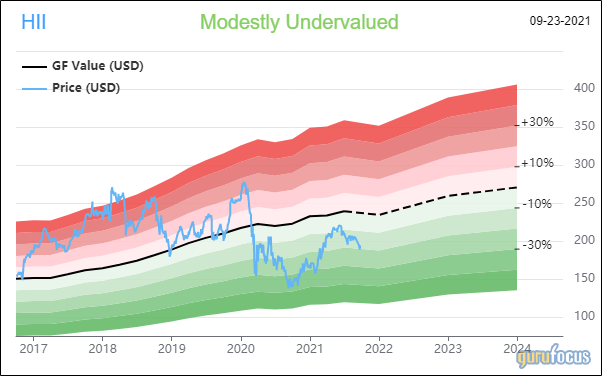 The valuation rank of 8 out of 10, however, favors undervaluation.

GuruFocus rated Huntington Ingalls’ financial strength 5 out of 10. In addition to adequate interest coverage, the high Altman Z-Score of 3 suggests the company is in good standing. The ROIC also surpasses the WACC, indicating good value creation.

The company’s profitability scored a 7 out of 10 rating. Even though the operating margin is declining, Huntington Ingalls has strong returns that outperform a majority of competitors and a moderate Piotroski F-Score of 6. Steady earnings and revenue growth contributed to a two-star predictability rank. GuruFocus data shows companies with this rank return an annual average of 6%.

Simons’ firm is the company’s largest guru shareholder with 0.19% of its outstanding shares. Pioneer Investments, Greenblatt, Jones and

Ray Dalio (Trades, Portfolio) also have positions in Huntington Ingalls.
Also check out:
Not a Premium Member of GuruFocus? Sign up for a free 7-day trial here.