A look at 3 industrial companies that rank very high on profitability. 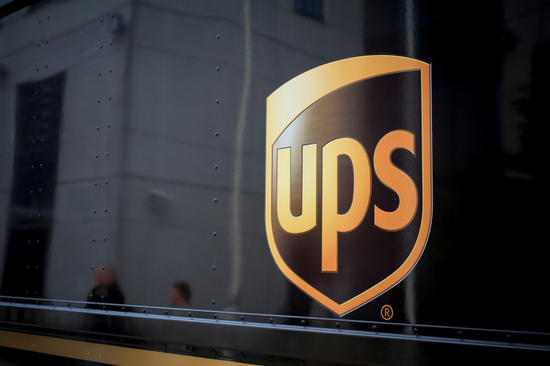 Many of the names in the industrial sector have seen their share prices increase in value this year. The S&P 500 index has returned almost 35% in 2021. Given this, the valuations in many areas of the market have become stretched.

However, the stocks of highly profitable companies are rarely on sale, so investors looking for an entry point should be ready to buy when they do decline. This article will examine three names in the industrial sector that score very highly on GuruFocus’ measure of profitability and that are on my shopping list if they were to trade at a lower price.

CTAS, Financial) is primarily focused on uniform rentals and facility services, of which it is the leader in the U.S. The company also provides safety services, first aid supplies and other business-related services. Cintas has a market capitalization of nearly $42 billion and generates annual revenue of $7.1 billion. 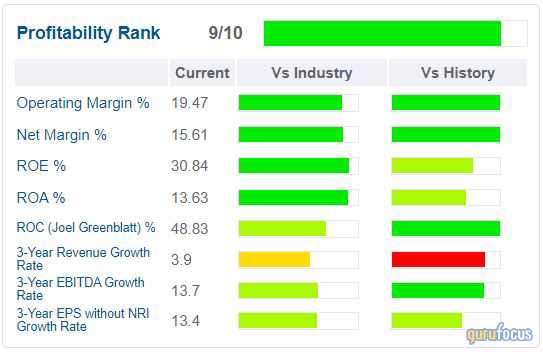 Cintas receives a 9 out of 10 from GuruFocus on its profitability rank as the company has industry-leading numbers for a variety of metrics. The company’s operating margin of 19.5% comes in better than 87% of the more than 1,000 names in the business service industry. This is also Cintas’ best performance in the last decade. Net margin tops 88% of the peer group and, again, is the company’s best result in at least the last 10 years.

The company’s other best scores are on its return on equity and return on assets, which come in better than 93% and 92% of the competition, respectively. These marks are near the top end of Cintas’ 10-year range as well.

Cintas has a three-year earnings per share without non-recurring items growth rate of 13.4%. This outperforms approximately two-thirds of the peer group and is above the company’s median score for the last 10 years.

Cintas’ lone weakness in profitability is the company’s three-year revenue growth. At just under 4%, this only tops 60% of its industry. This is also close to the low score for the company for the last decade.

Extremely profitable companies often have very strong earnings growth rates. In addition, they often have the ability to pay and raise dividends for long periods of time, and Cintas is no different. According to Value Line, earnings per share have a compound annual growth rate (CAGR) of 16% over the last decade. Earnings per share for fiscal year 2021, which ended May 31, grew 23% from the prior year.

Cintas has raised its dividend for 38 consecutive years. The dividend has a CAGR of nearly 21% for the 2011 to 2020 time period. Cintas increased its dividend by 27% for the Sept. 15 payment date. The company had traditionally paid an annual dividend every December, but switched to a quarterly dividend payment schedule earlier this year. Shares yield 1% compared to the 10-year average yield of 1.3%.

The company’s annualized dividend is now $3.80 following the most recent raise. Wall Street analysts expect that Cintas will earn $10.65 per share in fiscal year 2022, implying a projected payout ratio of 36%. This is above the 10-year average payout ratio of 29%, but still in a very safe range. 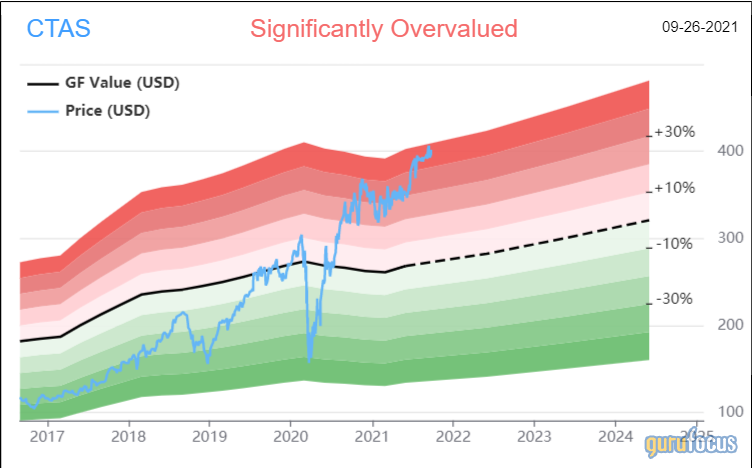 Shares have a GF Value of $272.86. Using the current share price, the price-to-GF-Value ratio is 1.47. Cintas’ stock would need to decline 32% to reach its GF Value. The stock is rated as significantly overvalued.

Cintas is a leader in its industry, which has enabled the company to grow its earnings per share and dividend at a very high rate for a long period of time. That said, investors have bid shares up accordingly and the stock now sits well above its long-term average valuation and at a hefty premium to its GF Value. On a pullback, Cintas would make a good addition to the portfolio for those looking for earnings and dividend growth.

UNP, Financial) is the largest railroad company in the U.S., operating more than 32,000 miles of track throughout the western two-thirds of the country. The company is valued at $133 billion and has annual revenue approaching $20 billion. 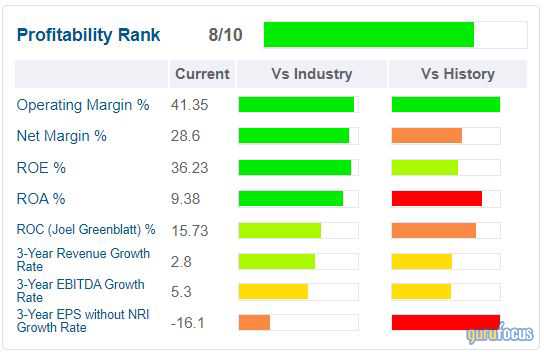 Union Pacific scores an 8 out of 10 on its profitability rank. The company’s operating margin of 41.4% is not only its best mark of the last 10 years, but is also better than 97% of the more than 900 companies in the transportation industry. Return on equity is Union Pacific’s second-best metric, topping 94% of the peer group. This is just above the company’s median performance over the long-term.

Elsewhere, Union Pacific tops the competition on most metrics, even if its among the weaker results for the company. Net margin of 28.6% and return on assets of 9.4% are better than 93% and 84% of peers, respectively, but on the lower end of the company’s range for the last 10 years.

Return on capital and three-year revenue growth top nearly two-thirds of the competition, but are, again, on the low end for Union Pacific over the last decade.

One area of concern is that Union Pacific’s three-year growth rate without non-recurring items is 16.1%, a worse showing that three-quarters of the industry. This is also at the very bottom of the long-term range.

However, Union Pacific has increased its earnings per share at a very high rate over the long-term. Earnings per share have a CAGR of over 9% since 2011, including a 3.1% decrease last year as Covid-19 negatively impacted results. Analysts expect the company to have a major rebound in 2021 as the business environment begins to normalize and earnings per share rise 22.4% to $9.94.

Union Pacific has aggressively increased its dividend over the last decade, with a CAGR of almost 15% during this time. The company’s dividend growth streak now stands at 14 years following a 10.3% increase for the June 30 payment date. The stock offers a yield of 2.1%, which isn’t too far off the average yield of 2.2% since 2011.

Investors should see $4.18 of dividends per share this year, resulting in a projected payout ratio of 42%. This is nearly in-line with the long-term average payout ratio of 39%. 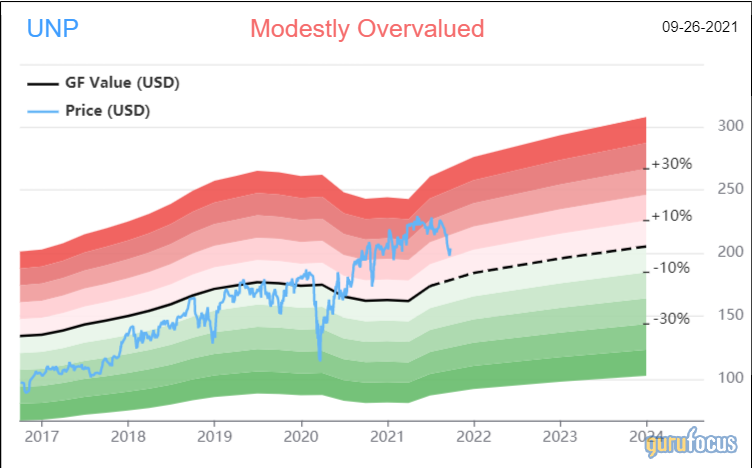 Union Pacific has a GF Value of $178.79. Using the current share price, the stock has a price-to-GF-Value ratio of 1.14. A 12.4% decline in price would be needed for the stock to trade with its GF Value. As such, shares are rated as modestly overvalued.

Railroads have high barrier to entry, and Union Pacific’s dominance of the western two-thirds of the U.S. make it one of the few ways products can be moved by rail in this region. This affords Union Pacific opportunity to see its business flourish and profits to keep rising. The company beats much of its peer group on a number of profitability metrics and has very strong earnings and dividend growth over the last decade. This is another name I would be interested in at a lower price.

UPS, Financial) is the largest integrated air and ground package delivery company in the world. The company provides service in more than 220 countries around the world. UPS has a market capitalization of $164 billion and produced revenue of almost $85 billion last year. 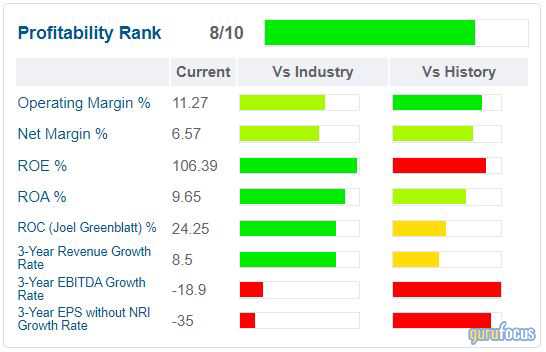 UPS also receives an 8 out of 10 rating on profitability. The company leads its industry group in several areas, including return on equity, where its result is ahead of 99% of the transportation industry. This is near the low end of the company’s 10-year range.

The operating margin of 11.3% is close to a high for UPS and a better showing than more than three-quarters of the industry. Net margin comes in better than two-thirds of the competition and close to a 10-year high. Return on assets is better than 88% of its peers and above the median figure of the last decade.

Return on capital is much better than the peer group, but near the median result for the last decade for the company. The three-year revenue growth rate has been outstanding compared to the industry, but the three-year earnings per share without non-recurring items growth rate trails most of the competition.

Shareholders have seen their dividends compound at a rate that matches the earnings growth rate over the last decade. After a 1% increase for the payment made this past March 10, UPS has a dividend growth streak of 12 years. The stock yields 2.2%, well off of its 10-year average yield of 3%.

With a GF Value of $150.65, UPS has a price-to-GF-Value ratio of 1.25. A retracement to the GF Value would result in a 25% decline in the share price. UPS has a modestly overvalued rating from GuruFocus.

UPS is the leading delivery private company in the world. The company has seen a benefit from increased e-commerce due to the Covid-19 pandemic and analysts expect that the next two years will see earnings per share grow by a combined 40% from 2020 levels. UPS already ranks well against its peer group in a number of different metrics, and that’s before the expected growth that it will see this year. The stock is expensive using its intrinsic value, but trades below its long-term average earnings multiple. With a booming business and reasonable price-earnings multiple, UPS could be a solid investment even at this level. As a shareholder already, I would likely add to my position on a pullback.

I am/we are Long UPS
Rating: 0 / 5 (0 votes)
Write for GuruFocus
Submit an article
How to use GuruFocus - Tutorials What Is in the GuruFocus Premium Membership? A DIY Guide on How to Invest Using Guru Strategies GuruFocus New Features