Exploring Charlie Munger's Decision to Double Down on Alibaba

A look at the legendary investor's trade 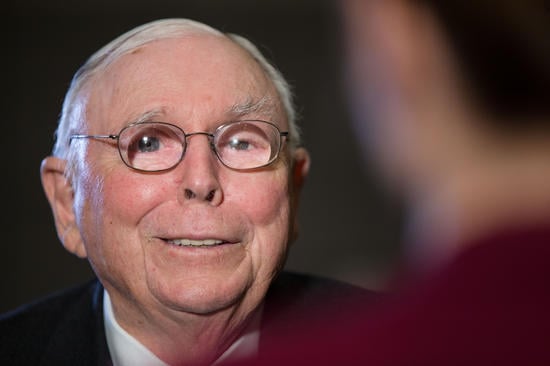 It looks as if

According to the Daily Journal Corp.'s (

DJCO, Financial) 13F report for the quarter ended Sept. 30, the holding company increased its ownership of the Chinese e-commerce giant by 83%.

The Daily Journal now owns just over 300,000 shares of the company, making it a near 20% portfolio weighting.

At the end of the quarter, the position was worth around $45 million. It is now the holding group's third-largest position after Bank of America Corp. (

As Munger is the chairman of the Daily Journal and instructs the group to make equity trades, we can assume that he was behind the position increase.

This is an interesting move for a couple of reasons.

First of all, it's fascinating that the billionaire continues to believe this Chinese company has potential. In recent months, the Chinese government has intensified its crackdown on certain areas of the economy, spooking many investors around the world.

We only need to look at the performance of the Alibaba share price to understand how investors have reacted to this intense regulatory crackdown. The stock is off around 38% year to date.

Secondly, the trade is interesting because, at the end of the second quarter, the Daily Journal reported just $9.3 million in cash and equivalents. I estimate the Alibaba purchases would have cost around $20 million. This is only speculation, however, and the company could have sold other assets to raise money, but I think it is likely the stock was purchased using borrowed money.

Once again, I should make it clear that this is only speculation. However, looking at the Daily Journal's second-quarter 10-Q, the group reported $32 million of "investment margin account borrowings" under long-term liabilities.

I have highlighted the company's use of margin account debt in the past. It is now entirely surprising that the corporation is borrowing money to invest.

When Munger was managing his own investment partnerships, he was pretty happy to borrow a significant amount of money to invest in the market if he believed the chances of success were relatively high.

The Chinese-born American investor, who founded Himalaya Capital, has made a fortune investing in Chinese companies. He probably knows the market better than any other investor.

Munger had money invested with Li at one point, and the two are still on speaking terms. On that basis, I do not think it is unreasonable to say that Munger may have run the Alibaba position by Li before buying.

If Munger and Li have been in contact, it may explain why the Daily Journal chairman has been happy to boost his holding despite the uncertain environment in China.

Munger's decision to increase his position in Alibaba should be viewed in isolation. As I have highlighted above, he has an advantage over individual investors in the fact that he knows Li. He may know something the rest of the market does not. And even if he does not have some insight not available to the rest of the market, Munger's legendary patient attitude is an advantage many investors just do not have.

Investors should always complete their own research before initiating a position, even if Munger is doubling down on his holdings.

I/we have no positions in any stocks mentioned, and no plans to initiate any positions within the next 72 hours.
The views of this author are solely their own opinion and are not endorsed or guaranteed by GuruFocus.com
Rating: 2 / 5 (2 votes)
Bookmark