A look at the company's third-quarter results 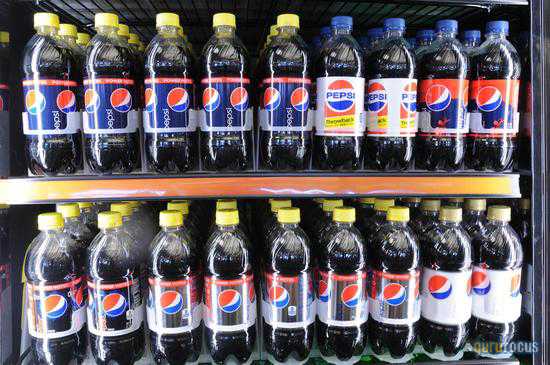 Unlike previous quarters, this growth is coming off a strong period in the prior year, providing evidence that not only has the company recovered from the Covid-19 pandemic, but it is in a very envious business position.

Shares aren’t cheap, but quality rarely is. Let’s look closer as to why PepsiCo remains a top name in the food and beverage industry.

PepsiCo reported third-quarter earnings results on Oct. 5. Revenue grew 11.6% to $20.2 billion, coming in almost $800 million above what Wall Street analysts had anticipated. Adjusted earnings per share of $1.79 was a 13-cent, or 7.8%, increase from the prior year and 6 cents higher than expected.

Organic revenue was 9%, with currency exchange being a 2% tailwind to results. Growth was driven by an 8% increase in beverage volumes, but food and snack volumes were up a solid 4%.

Looking at the individual segments within the company, PepsiCo Beverages North America had 7% organic growth, aided by a 3% improvement in volume. Mountain Dew, ready-to-drink teas and water were among the standout performers during the quarter. Pepsi grew at a high single-digit clip.

Frito-Lay North America was up 5%, including a 1% gain in volume. PepsiCo continues to acquire additional market share in the salty and savory snack categories. Doritos grew by mid-single digits while the company’s smaller, more nutritious snack brands, such as PopCorners and Bare, had double-digit gains.

Latin America was up 19% and Europe grew 8%, with mid-single-digit increases in volumes for both food and snack and beverages for both regions. Brazil and Mexico were up double digits, while Spain improved at a high single-digit rate.

The Africa, Middle East and South Asia region was the best performer, with organic revenue growing 20% year over year. Beverage demand was extremely high as volume was up 18%. Food and snack had 5% volume growth. Egypt and South Africa were among the top gainers in this region.

The Asia Pacific, Australia, New Zealand and China region grew 15%. Food and snack volumes were up 11%, while beverages were higher by 9%. China had organic growth in the double digits, while Australia improved at a high single-digit rate.

PepsiCo updated its forecast for 2021 as well. The company now expects organic revenue growth of close to 8% for the year, up from 6% previously. Adjusted earnings per share are forecasted to be $6.20. This is slightly below analysts’ estimates, but still a 12.3% increase year over year.

Organic growth was very high in the most recent quarter, but not due to an easy comparable figure by any means. PepsiCo had 4.2% organic growth in the same period of 2020, a number that was much more in line with the company’s pre-pandemic performance. The growth this time around comes on top of solid business results. Revenue totals for the quarter was the third-best figure in more than five years.

In the prior year, food and snack volumes improved 3% with beverages higher by 1%, again more in line with PepsiCo’s recent results. This means that the most recent quarter was built upon a fairly normalized comparable period, demonstrating how stout PepsiCo’s performance in the third quarter truly was.

Currency exchange was a benefit in every business and region during the quarter, but organic growth was incredibly strong throughout the company. The only segment that failed to produce at least 5% organic revenue growth was Quaker Foods North America. This segment grew 6% in the prior year and was still the recipient of the eat-at-home transition that was occurring due to social distancing requirements. Previously, this business had shown little to no growth, but this past quarter’s result is on top of a hearty gain.

PepsiCo’s strength nearly everywhere is a testament to its portfolio of brands. The company has 23 brands that bring in at least $1 billion of annual revenue. Products with this level of revenue generation include Pepsi, Mountain Dew, Tostitos, Cheetos, Starbucks Coffee, Gatorade and Lipton and span different categories, such as carbonated soda, snacks, sports drinks and teas.

There has been some movement amongst these brands, however, as PepsiCo announced in early August that it was selling its Tropicana and Naked juice brands to PAI Partners for $3.3 billion. The company’s juice business brought in approximately $3 billion in revenue in 2020, but at the expense of lower margins.

Speaking of margins, PepsiCo did see some contraction in the third quarter. The adjusted gross margin fell 120 basis points to 53.6%, while the adjusted operating margin was down 70 basis points to 16.1%. Higher raw material, wage increases and supply chain disruptions are the culprits here, but price increases schedule to take place in the fourth quarter and possibly into 2022 could work to offset these issues. And despite these headwinds, results were still very good, showing that the company can withstand challenges and still produce.

PepsiCo’s guidance remains very good. Organic revenue was hiked higher for the second consecutive quarter. And while adjusted earnings per share was slightly less than the analyst community had expected, it would be the largest year-over-year increase in the last decade were it to be achieved. Remember, despite the headwinds Covid-19 provided last year, PepsiCo’s earnings per share were flat from 2019. 2020 as a whole wasn’t that much of a downturn in business overall.

PepsiCo’s stock barely budged following the earnings release, but the stock is up 3.6% in the two trading days since. Using the current share price of $157 and company guidance for earnings for the year, the companyhas a forward price-earnings ratio of 25.3. This is a premium to the five- and 10-year average price-earnings ratios of 22 and 20.6.

However, this is arguably not exactly an extremely steep premium, given PepsiCo’s business model, brand power, leadership position in the consumer packaged foods space and nearly five decades of dividend growth. 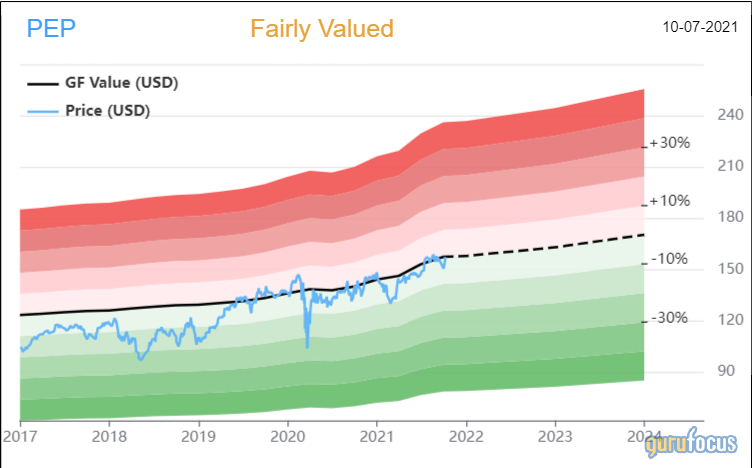 PepsiCo has a GF Value of $154.13. Using the current share price, this gives the stock a price-to-GF Value of 1.02. Shares receives a fairly valued rating from GuruFocus.

PepsiCo delivered another good quarter, one that built upon solid results in the prior year. The company saw gains in all businesses and raised its guidance yet again. What really surprised me is how well the company performed compared to the prior year, when nearly every segment and region had begun to show serious signs of recovery from the pandemic. This quarter really speaks to the strength of PepsiCo's business.

Shares of the company are slightly overvalued compared to the historical valuation and fairly valued against the GF Value, but the stock doesn't look to be wildly overvalued either.

Given the state of the business and the reasonable valuation, I continue to find PepsiCo to be a buy on any weakness.

I am/we are Long PEP
The views of this author are solely their own opinion and are not endorsed or guaranteed by GuruFocus.com
Rating: 3 / 5 (1 votes)
Bookmark