The magazine company's shares have spiked above their acquisition value

John Rogers (Trades, Portfolio)’ Ariel Investment has slimmed down its Meredith Corp. (MDP, Financial) holding by 31.99%, according to Real-Time Picks, a Premium feature of GuruFocus.

Real-Time Picks shows that the guru sold 879,752 shares of Meredith on Sept. 30, leaving a remaining holding of 1,870,531 shares. The trade had a -0.45% impact on the equity portfolio. On the day of the trade, shares exchanged hands for an average price of $55.70. GuruFocus estimates the total gain of the investment over the past decade has been 85.81%.

IAC, Financial) Dotdash. According to a Wall Street Journal article published on Sept. 23, the two companies had been in talks in which Dotdash was considering acquiring Meredith for approximately $2.5 billion, or $40 per share.

The article sparked a 30% jump in Meredith’s share price to above $55, even though nothing had been confirmed yet. However, those who heeded the rumors were validated on Oct. 6 when Dotdash released an official announcement that it has agreed to acquire Meredith for $2.7 billion in cash, valuing shares at $42.18 apiece. Meredith’s stock rose to above $58 a share on the confirmation. 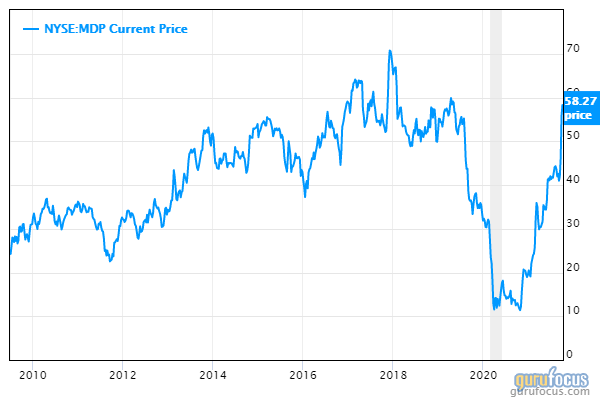 We don’t know why Ariel Investment decided to cut its Meredith position. Perhaps it was to take an easy profit on rumors that may or may not have turned out to be true, perhaps it was for another reason entirely.

Additionally, the sale brings the firm’s ownership of Meredith’s total shares outstanding down to 4.09%, which is below the 5% threshold for having to report the trade sooner than the normal quarterly filings. Thus, we will need to wait until the end of the next quarter to know whether the firm has continued to sell the stock.

Meredith is a holding company that primarily owns magazines, including iconic magazines like People, Southern Living and Better Homes & Gardens. It sold its collection of 17 TV stations to Gray Television (

GTN, Financial) earlier this year for $2.7 billion. Meanwhile, Dotdash is a digital media company. The merger of the two is geared toward bringing out Meredith’s full potential by accelerating its digital transformation.

The new company, which will be called Dotdash Meredith, will be run by Dotdash CEO Neil Vogel. Its publications are expected to reach a combined 175 million monthly users, including 95% of U.S. women, according to company representatives. This would give it scale comparable to many social media platforms.

Dotdash has already recorded an impressive 17 quarters of double-digit revenue growth, and Meredith will add 40 publications, 120 years of industry experience, strong advertising relationships and an expanded pool of first-party data.

As per the most recent SEC filings, Ariel Investment’s equity portfolio consisted of 110 stocks valued at a total of $10.64 billion.

The top holdings were Baidu Inc. (

I/we have no positions in any stocks mentioned, and no plans to initiate any positions within the next 72 hours.
The mention of stocks in this article does not at any point constitute an investment recommendation. Investors should always conduct their own careful research and/or consult registered investment advisors before taking action in the stock market.
The views of this author are solely their own opinion and are not endorsed or guaranteed by GuruFocus.com
Rating: 0 / 5 (0 votes)
Bookmark