Luxury fashion and apparel was one of the worst-hit industries by the Covid-19 pandemic. The lockdowns and the increased consumer reluctance to step out of home ensured that the demand for luxury accessories, fragrances and many other items went down given the absence of occasions when consumers would actually use them.

However, these companies have seen a strong recovery as people become less wary of the pandemic. The gradual return to active social lifestyles, events and occasions has stimulated the demand for luxury goods, as has the great transfer of wealth from the poor to the rich. Given the current situation, I believe that global fashion luxury retailer Capri Holding Ltd. (

CPRI, Financial) appears to be in a good position to capitalize on the changing trends.

Capri Holdings is a global leader in premium and luxury fashion. Previously known as Michael Kors Holdings after its largest brand, it underwent a name change in December 2018. It has its headquarters in London, UK.

Its brands, Michael Kors, Versace and Jimmy Choo, are among the top luxury brands in the world. The company is known to distribute apparel, footwear and accessories across the globe, including in the United States, Canada, Latin America, Europe, the Middle East, Africa and Asia.

Apart from e-commerce, the company generates a large chunk of its revenue through a wide distribution network including wholesalers, boutiques, departmental stores and specialty stores. Its business was deeply impacted during the initial onset of the Covid-19 pandemic. However, the company has shown a solid recovery over the past few quarters on account of increased online sales across its brands.

Capri Holdings has ensured its sustenance despite the turbulent business environment caused by the pandemic as a result of a strong digital strategy. The company saw its consolidated e-commerce sales increase by approximately 60% in the recent quarter with a sequential improvement in in-store productivity. Versace and Jimmy Choo were the standout brands, with triple-digit growth in digital sales, while Michael Kors displayed impressive double-digit growth in e-commerce sales. This most likely means that Capri Holdings' digital penetration has increased from 24% of the top-line for fiscal 2021 on an ex-wholesale basis. In comparison, its rivals LVMH (OTCPK:LVMUY) and Kering (

XPAR:KER, Financial) have much higher digital penetration rates. As a result, there is definite scope for further digital growth, which is likely to be accretive to the company's margins as well.

Capri Holdings is expected to continue its recovery across product offerings, with Jimmy Choo set to benefit from dress styles as consumers return to work. At Michael Kors, the continued penetration growth of Signature, which now accounts for a larger percentage of the assortment, along with positive results in watches and jewelry, should boost its sales. At Versace, all categories appear to be doing well, with the brand's traction in accessories looking particularly promising. The management has given higher-margin guidance for Jimmy Choo for the year and Michael Kors' margin profile has also recovered to a mid-20s percentage, which is a major green flag.

Capri Holdings has consistently deployed its resources in order to expand product offerings, upgrade distribution infrastructure, create seamless omnichannel capabilities and deepen customer engagement. As per a recent press release, its Versace brand extended its license agreement with EuroItalia, a leading Italy-based global fragrance and cosmetic company, for an additional 15 years. The Versace-EuroItalia partnership started in 2005 and has evolved into a leading global designer luxury fragrance business.

Given Versace's fragrance business success, management is eager to extend this strategic agreement in order to maximize the brand's potential, which is why they announced that Michael Kors and EuroItalia would sign a 15-year agreement that will make EuroItalia the global licensee for Michael Kors men's and women's fragrances. They also believe that the Michael Kors fragrance wing has greater growth potential.

Apart from this, the management is also strengthening its position in the luxury fashion industry. It remains confident in Versace's ability to establish itself as a leading luxury leather house and increase accessory revenues to $1 billion over time. Furthermore, at Michael Kors, it continues to amplify signature penetration across all product categories to increase the same to 50% of the business. 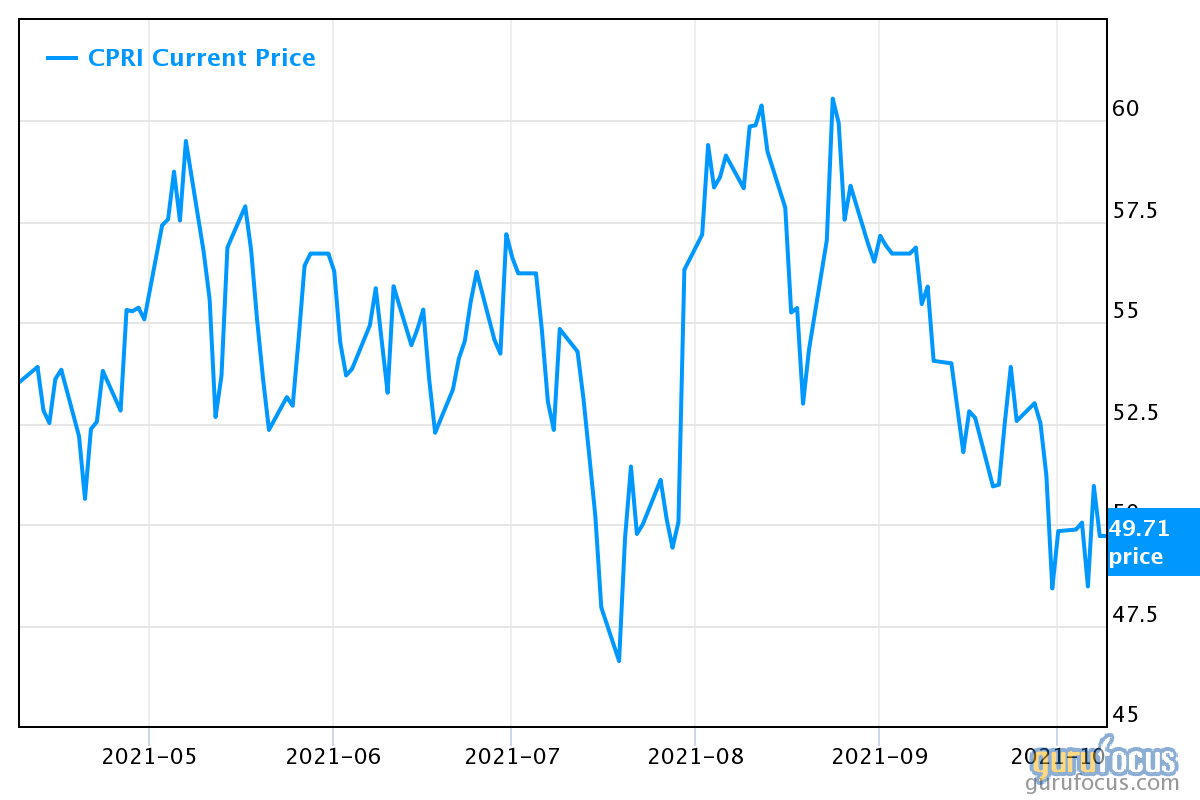 As we can see in the above chart, Capri has had a fairly volatile trajectory for the past year. While the consumer behavior is definitely changing in its favor, its current price-sales ratio of 1.56 and its enterprise-value-to-Ebitda multiple of 21.57 are certainly above the average for the apparel and accessories industry. Overall, I believe that Capri Holdings could be a decent watchlist candidate, and investors should wait for definitive signs of growth before buying the stock.

I/we have no positions in any stocks mentioned, and no plans to initiate any positions within the next 72 hours.
The views of this author are solely their own opinion and are not endorsed or guaranteed by GuruFocus.com
Rating: 4 / 5 (2 votes)
Bookmark