Current yield of 8.6% towers over that of its industry peers 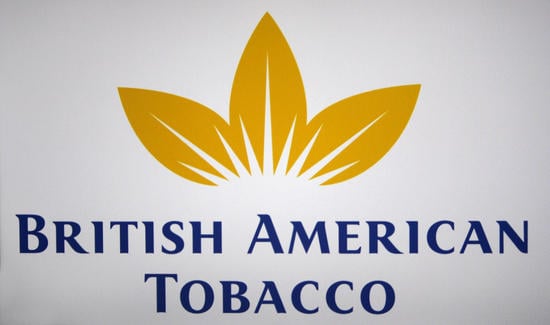 Although interest rates are likely to rise sometime in 2022, the panoply of choices available for above-average yields for income-oriented investors, among bonds or bond surrogates, remains meager: The S&P 500 (

What if investors could capture an 8.6% yield from a company that is selling below its intrinsic value and whose revenue base is solid and continues to grow? For investors who don’t view tobacco stocks as anathema and are looking to maximize current income, British American Tobacco PLC (

BTI, Financial) is a worthy candidate for consideration.

Although the stock is alluring based on its mouth-watering 8.6% yield, the question arises about how safe the dividend is. A review of several financial metrics will tell the tale.

The chart below shows the relative mismatch between the stock price and revenue increases. British American has shown consistent revenue growth over the past five years. Given that tobacco products are frowned upon in this country, this revenue increase may seem like an anomaly for U.S. investors. However, the reality worldwide is that tobacco use in many other countries is not on a downward trajectory, but rather is increasing. The company continues to realize strong revenue growth from other countries, such as Turkey and Brazil. It has seen growth in emerging markets, with increasing sales in Bangladesh, Mexico, Vietnam and Russia. Revenue growth in these foreign markets helps to offset diminishing combustible product sales in other geographic regions. 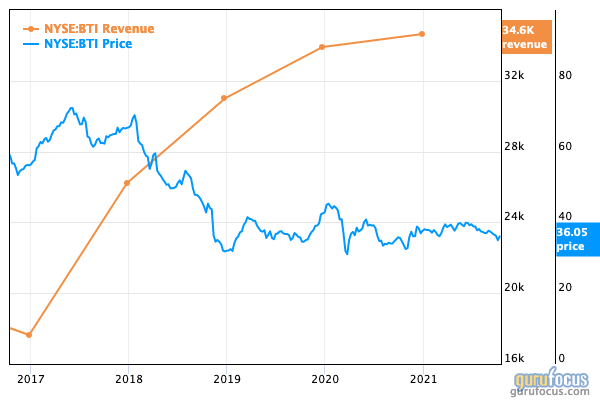 Although the company is currently generating ample revenue with its legacy tobacco products — particularly in the emerging markets — the long-term growth potential lies in non-combustible products, such as heated tobacco and vapor techniques. British American’s next-generation products that will appeal to millennials and generation X consumers will constitute a growing percentage of the company’s overall revenue mix.

British American is intent on transforming itself from a combustible tobacco products company into a multi-category consumer products company. Indeed, the growth of this new segment is evident, as noted in the chart above, from the near doubling of its revenue over the past five years.

In an important development on Oct. 12, the U.S. Food and Drug Administration gave British American the green light to market its Vuse Solo e-cigarettes and tobacco-flavored pods, making it the first vapor product to get clearance from the health regulator. This is significant for the “sin stock” (as well as for its competitors) in the sense that a major health regulator in the U.S., by its approval of non-traditional products, appears to have lent credence to its investment thesis that long-term growth lies in the non-combustible markets.

As indicated by the company’s solid revenue stream and working capital, the combustible, traditional tobacco products are the funding vehicle for the company’s next-generation non-combustible products.

One financial measure that is cause for concern is the relatively high debt load the company has assumed. The chart below starkly reveals the ballooning of its long-term liabilities. 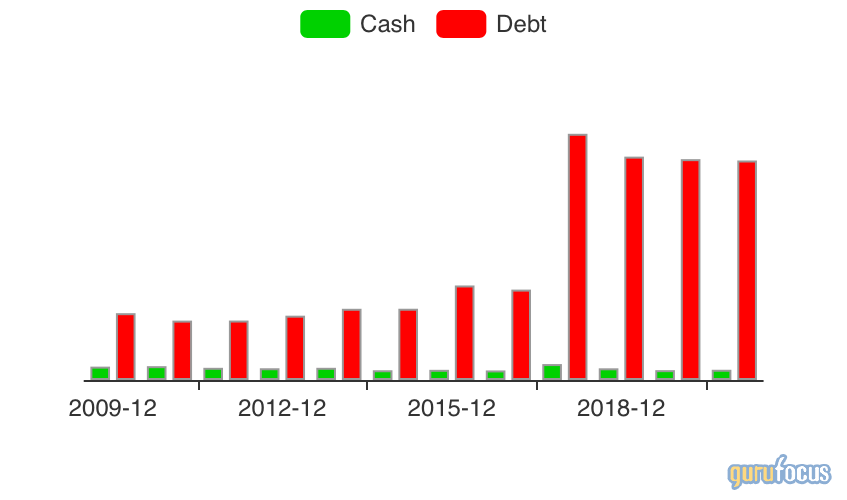 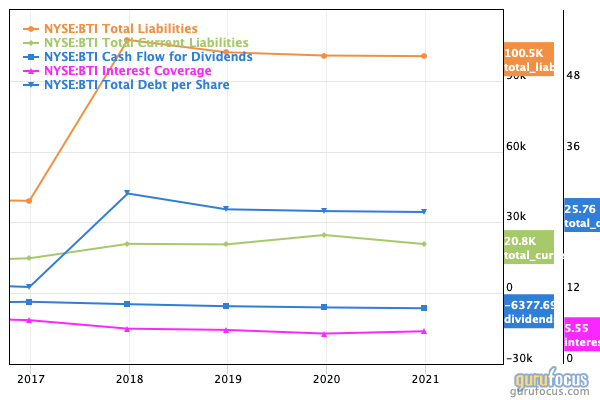 British American Tobacco's rather onerous debt burden occurred after its $86 billion acquisition of Reynolds America in 2017. This substantial increase in the company's debt load is reflected in a poor Altman-Z score of 1.32. The company scores poorly on other debt and long-term liability metrics. Debt-to-equity ranked worse than 78.38% of 37 companies in the tobacco products industry. The industry median is 0.06, while British American’s ratio is 0.72.

In addition, the company’s interest coverage ranked worse than 82.35% of 34 companies in the tobacco products industry. The industry median is 25.66, while British American has a ratio of 5.6. Offsetting the heavy debt load is the tobacco giant’s favorable free cash flow indexes, which are far superior to its industry competitors.

The company’s operating margin of 38% stands above 85% of other companies in the industry. The company has a GuruFocus profitability rank of 8 out of 10.

Additionally, the company scores favorably on a price-to-free cash flow basis, ranking better than 80% of companies in the tobacco products industry. The industry maximum is 60.08, the median is 14.62 and the minimum is 3.79. British American's ratio sits at 7.57. 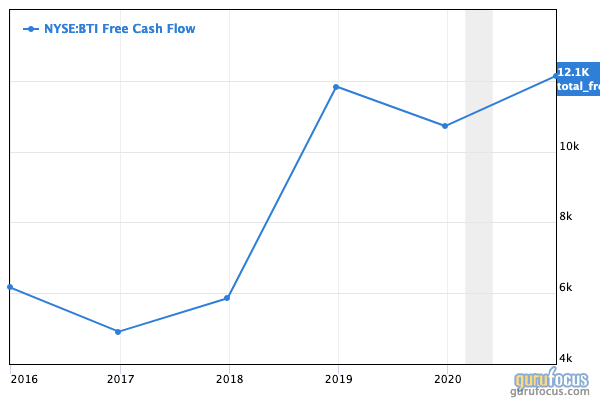 In terms of dividend coverage and potential increases, British American's payout ratio stands at only 65% versus 78% for Altria Group Inc. (

Despite its relatively high long-term liabilities compared to its competitors, at its current price of $36.06, the GF Value Line indicates the stock is modestly undervalued. 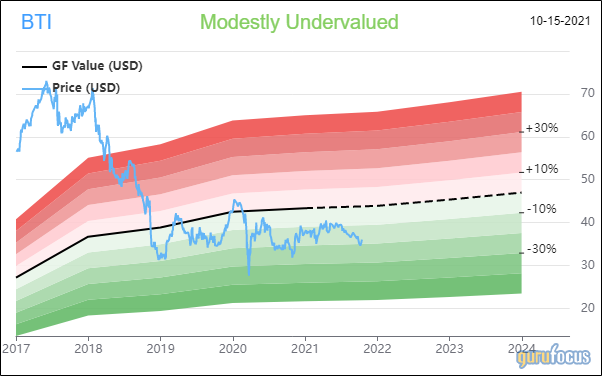 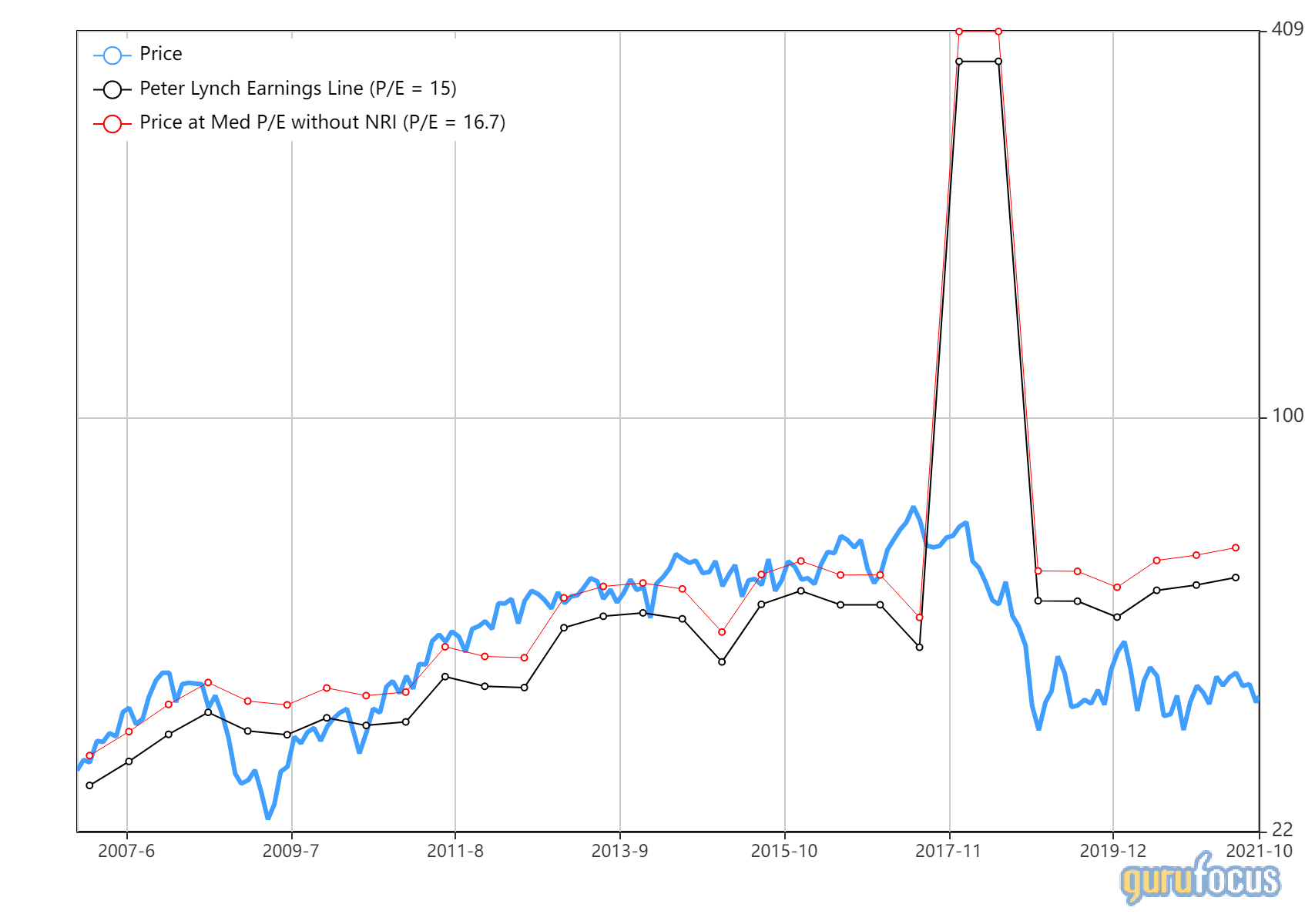 British American Tobacco appears to be a worthy candidate for value investors looking for a current high yield with the prospect of price appreciation over the intermediate term.

I/we have no positions in any stocks mentioned, and no plans to initiate any positions within the next 72 hours.
The views of this author are solely their own opinion and are not endorsed or guaranteed by GuruFocus.com
Rating: 5 / 5 (4 votes)
Write for GuruFocus
Submit an article
How to use GuruFocus - Tutorials What Is in the GuruFocus Premium Membership? A DIY Guide on How to Invest Using Guru Strategies GuruFocus New Features