As the big-name stocks begin to slow, opportunities remain among less-known companies 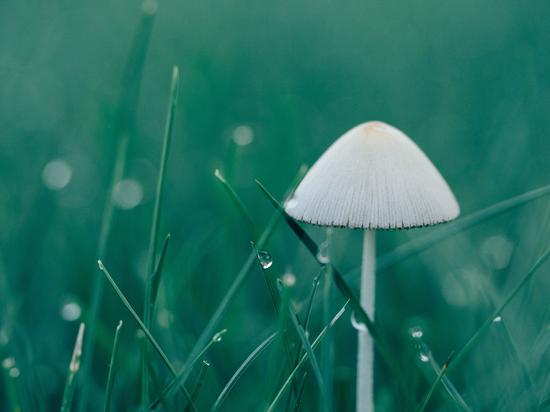 Over the past year, the U.S. stock market has charged higher and higher as the economy has recovered from the onset of the Covid-19 pandemic, as shown by the S&P 500’s 30% gain over this period. 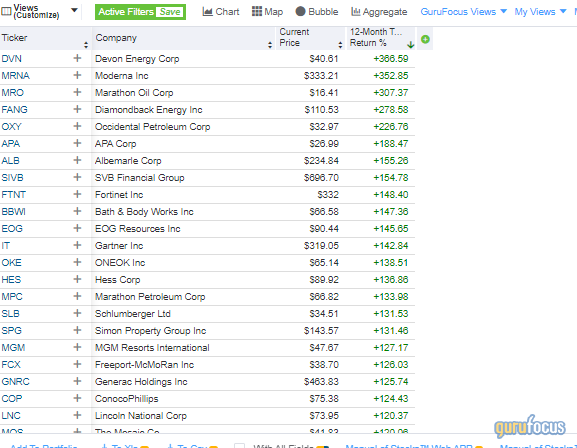 While mega-caps had an opportunity to post stellar growth in the wake of the March 2020 market crash, many of these stocks have already reached premium valuations that price in growth for years or even decades to come. Thus, the market has cooled somewhat on these stocks, reducing the potential for market-beating returns going forward.

However, that doesn’t mean that all value opportunities have disappeared. With the biggest stocks reaching premium valuations, many investors are turning their attention to mid-cap stocks, as these names get less attention from headlines and are often still in high-growth phases, providing a source of potential value opportunities. While riskier than large-cap stocks, mid-caps are typically less risky than small-cap stocks as they are more established and more likely to gain popularity among investors.

Thus, investors may be interested in the following mid-cap stocks that have high growth expectations from Wall Street. According to analysts surveyed by Morningstar, these mid-caps are projected to grow their top and bottom lines by at least 15% per year over the next three to five years.

DOCN, Financial) is a cloud infrastructure provider. It provides cloud services that enable developers to deploy and scale applications that run simultaneously on multiple computers, a model that is known as “Infrastructure as a Service (IaaS).” 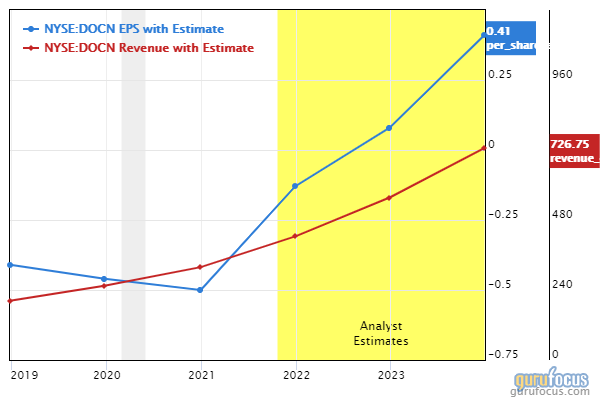 DigitalOcean is still new to the public market, having made its debut this past March. Its shares have gained 97% from the initial public offering price of $47 to trade around $92.77 on Oct. 19. 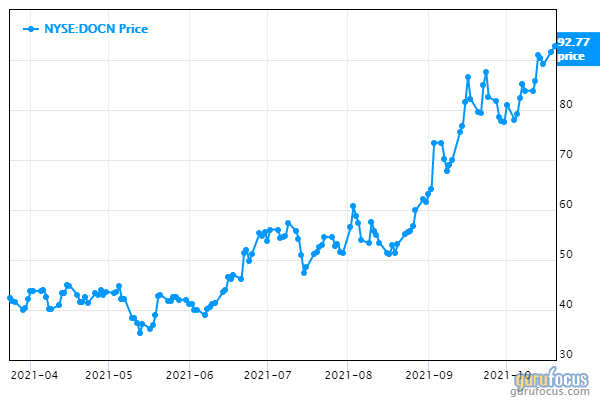 Although the company is taking on established giants like Amazon’s (

AMZN, Financial) Amazon Web Services, it believes there is plenty of room left in the market for it to grow, especially among its target market of small and medium-sized business. DigitalOcean focuses on keeping its products easy to use and providing a personalized customer support experience. Its focus on keeping things simple and easy makes it the preferred choice for companies that don’t need or want more complex platforms.

EXEL, Financial) is a genomics-based drug discovery company headquartered in Almeda, California. Founded in 1994, the company focuses on the discovery, development and commercialization of new medicines for difficult-to-treat cancers. 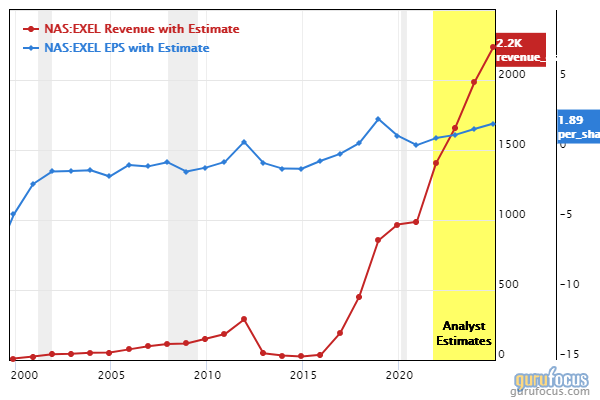 On Oct. 19, shares of the company traded around $21.66 apiece with a price-earnings ratio of 73.29. According to the GuruFocus Value chart, Exelixis is modestly undervalued. 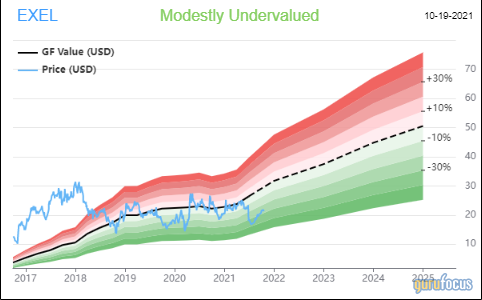 Exelixis has already achieved commercial success with Cabozantinib (sold under the brand names Cometriq and Cabometyx), a Food and Drug Administration-approved treatment for medullary thyroid cancer. This drug is the focus of an ongoing development program to prove effectiveness against more types of cancer. The stock is available at a lower valuation due to an unfavorable outcome from a recent phase 3 clinical trial, which concluded that Cabometyx was not effective as part of a combination therapy for advanced hepatocellular carcinoma. However, the drug is still being tested for many other applications; the outcome of trials for one indication is unlikely to determine the company’s entire future.

As shown in the chart below, EverCommerce’s earnings per share have been dropping even as its revenue has been growing. Analysts are expecting a three-to-five-year revenue growth rate of 24.40% for the company, while earnings per share is expected to grow 30% per year over the same period. 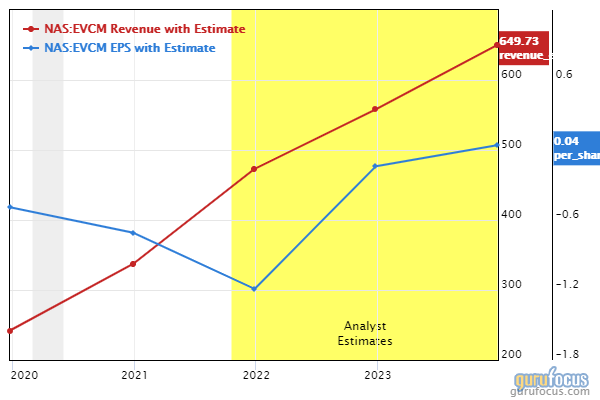 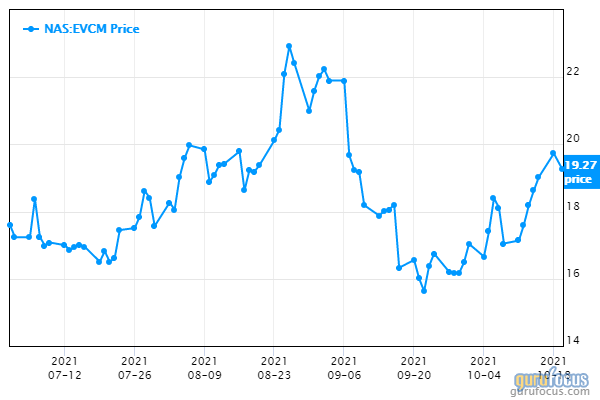 Founded in 2016, EverCommerce provides SaaS services specifically to small and medium-sized business operating in the services industry. These businesses were the hardest hit by the pandemic, so in addition to serving an underpenetrated market, EverCommerce should also benefit from said market’s economic recovery. The fact that analysts are expecting the bottom line to improve despite EverCommerce continuing to make acquisitions is an encouraging sign.

This company has seen its top and bottom lines rise swiftly in recent years, beginning in 2008 when OLED really took off. Analysts are expecting a three-to-five-year revenue growth rate of 18.69% for the company, while earnings per share is expected to grow 30% per year over the same period. 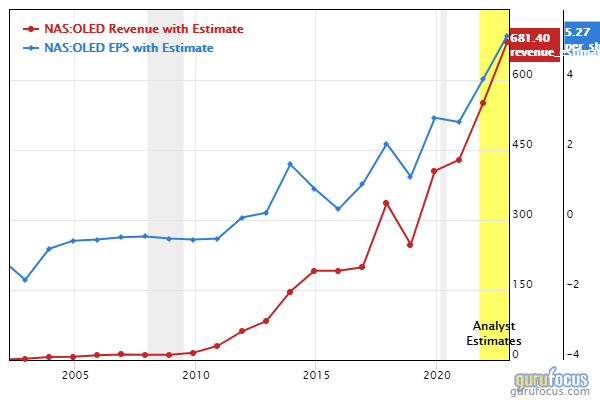 On Oct. 19, shares of Universal Dislpay traded around $179.80 with a price-earnings ratio of 46.51. The GF Value chart rates the stock as significantly undervalued. 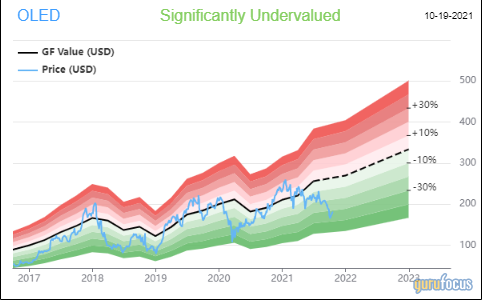 OLED technologies have exploded in popularity for two main reasons. The first is their energy efficiency; by spraying chemicals on an appropriate backing material, you get highly efficient lighting panels or low-power digital displays. The second draw is aesthetics, since this technology allows for brighter colors and flexible screens. The OLED market was worth $27.94 billion in 2020 and is expected to grow at a compound annual rate of 13.9% from 2021 to 2028, which Universal Display should directly benefit from as a pure-play OLED company.

Bloom Energy’s top and bottom lines have both been in a general uptrend in recent years, though the company has yet to become profitable. Analysts are expecting a three-to-five-year revenue growth rate of 18.61% for the company, while earnings per share is expected to grow 25% per year over the same period. 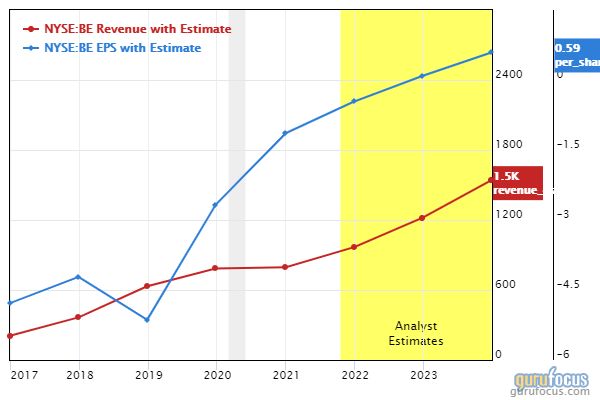 The company’s stock price broke $40 in the early months of 2021 before dropping nearly 50% as investors bid up clean energy stocks to bubble levels before backing off. 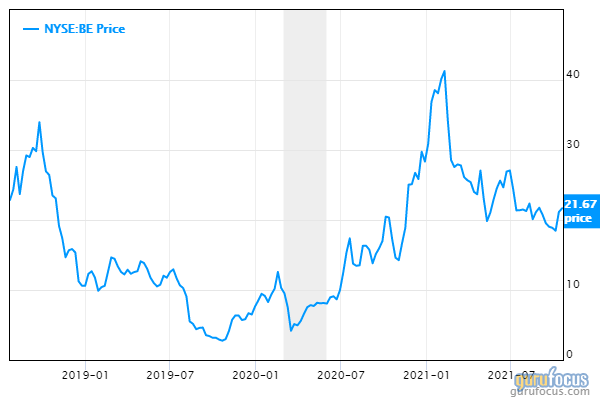 Bloom Energy’s products eliminate the need to depend on larger grids that all too often suffer from unpredictable power outages and changing costs. Its fuel cells convert natural gas, biogas and hydrogen into low-emission or zero-emission electricity. Among the relatively few names in this new but growing industry, Bloom Energy generates the most revenue, beating out Plug Power (

PLUG, Financial), Ballard (BLDP, Financial) and FuelCell (FCEL, Financial) by a long shot despite having a comparable market cap. Bloom Energy’s main advantage over competitors is that, before getting into the capital-intensive business of developing hydrogen fuel cells, it developed non-combustion natural gas and biogas fuel cells, ensuring a strong market throughout the world’s transition to green energy.

I/we have no positions in any stocks mentioned, and no plans to initiate any positions within the next 72 hours.
The mention of stocks in this article does not at any point constitute an investment recommendation. Investors should always conduct their own careful research and/or consult registered investment advisors before taking action in the stock market.
The views of this author are solely their own opinion and are not endorsed or guaranteed by GuruFocus.com
Rating: 5 / 5 (1 votes)
Bookmark