Managed by Jason Kritzer and Samantha Pandolfi, the fund, which is part of Boston-based Eaton Vance, invests heavily in the health care space. The portfolio managers look around the world for securities that are not only reasonably priced, but which they believe will grow in value over time.

The fund added five new holdings to the portfolio during the three months ended Aug. 31, divested of nine stocks and added to or trimmed a number of other existing positions. Its most notable trades included the sale of Centene Corp. (

CNC, Financial). The stock traded for an average price of $69.98 per share during the quarter.

GuruFocus estimates Eaton Vance gained 3.97% on the investment since establishing it in the second quarter of 2020.

The St. Louis-based managed care company, which focuses on providing health care programs to uninsured, underinsured and low-income individuals, has a $40.37 billion market cap; its shares were trading around $69.24 on Friday with a price-earnings ratio of 56.76, a price-book ratio of 1.56 and a price-sales ratio of 0.34. 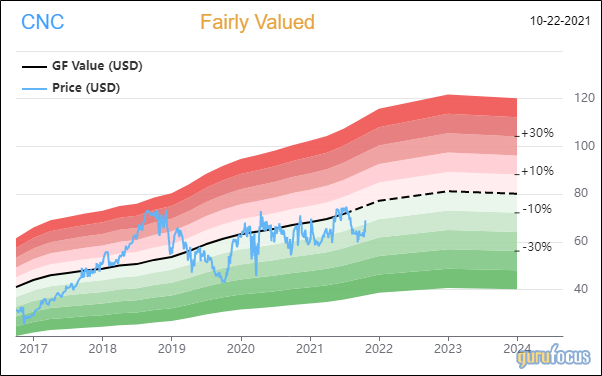 GuruFocus rated Centene’s financial strength 5 out of 10. As a result of the company issuing approximately $8.3 billion in new long-term debt over the past three years, it has weak interest coverage. The Altman Z-Score of 2.43 indicates it is under some pressure since assets are building up at a faster rate than revenue is growing. Creating value also appears to be a struggle since the return on invested capital is overshadowed by the weighted average cost of capital.

The company’s profitability scored a 7 out of 10 rating despite having a declining operating margin and returns on equity, assets and capital that underperform over half of its competitors. Centene is supported by a moderate Piotroski F-Score of 5 out of 9, meaning conditions are typical for a stable company, consistent earnings and revenue growth and a predictability rank of four out of five stars.

Of the gurus invested in Centene,

Impacting the equity portfolio by -1.24%, the fund exited its 66,490 remaining shares of Vertex Pharmaceuticals (

VRTX, Financial). During the quarter, shares traded for an average price of $198.85 each.

GuruFocus data shows the Worldwide Health Sciences Fund has gained an estimated 36.76% on the investment since establishing it in the first quarter of 2016.

The biopharmaceutical company, which is headquartered in Boston, has a market cap of $47.9 billion; its shares were trading around $183.99 on Friday with a price-earnings ratio of 24.36, a price-book ratio of 5.21 and a price-sales ratio of 7.25. 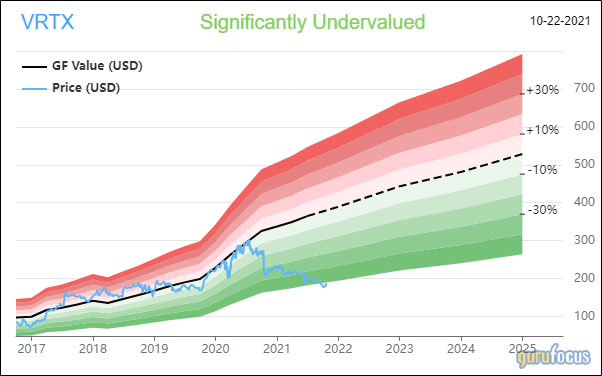 Vertex’s financial strength was rated 8 out of 10 by GuruFocus, driven by adequate interest coverage and a robust Altman Z-Score of 11.67. The ROIC also significantly eclipses the WACC, indicating value is being created.

The company’s profitability also fared well with a 6 out of 10 rating. In addition to strong margins, its returns outperform a majority of industry peers. Vertex is also supported by a moderate Piotroski F-Score of 6 and a one-star predictability rank.

With a 1.83% stake, Vanguard is the company’s largest guru shareholder. Other gurus invested in the stock include

After selling out in the second quarter, Eaton Vance invested in a new 132,809-share holding of the iShares Global Healthcare ETF (

IXJ, Financial), allocating it to 0.98% of the equity portfolio. The stock traded for an average per-share price of $84.88 during the quarter.

Tracking the performance of an index composed of global equities in the health care sector, the exchange-traded fund was trading around $85.94 on Friday. The 14-day relative strength index of 57.78 indicates the stock is neither overbought nor oversold. 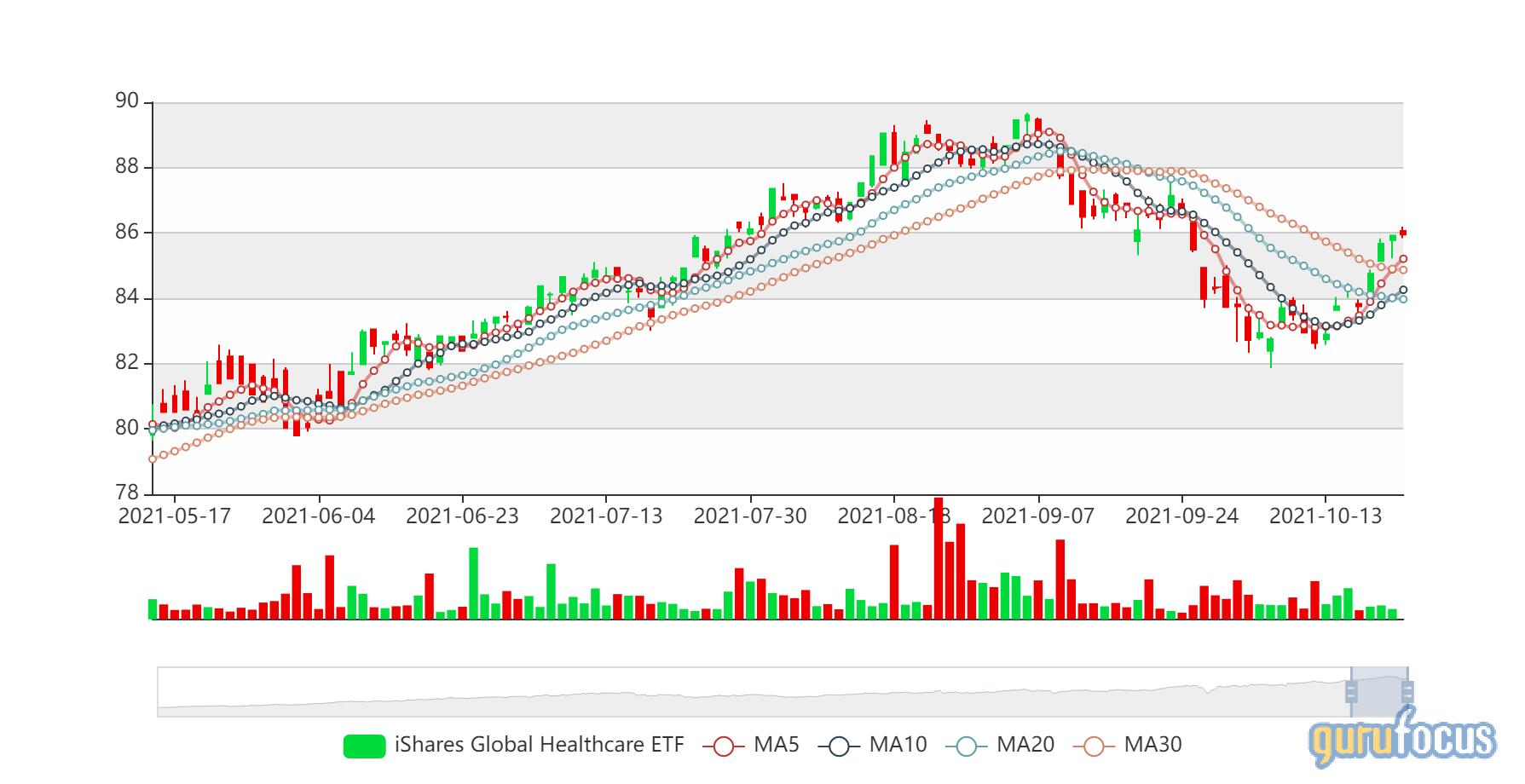 Another guru who is currently invested in the ETF is

The Japanese company, which produces ultra-fine stainless steel wire ropes for medical and industrial use, has a market cap of 809.86 billion yen; its shares closed at 2,982 yen on Thursday with a price-earnings ratio of 76.77, a price-book ratio of 8.37 and a price-sales ratio of 12.46. 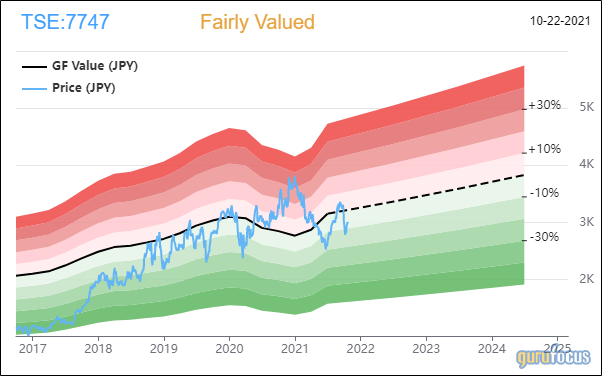 Asahi Intecc’s financial strength and profitability were both rated 8 out of 10 by GuruFocus. In addition to adequate interest coverage, the Altman Z-Score of 23.5 indicates the company is in good standing even though assets are building up at a faster rate than revenue is growing. The ROIC also surpasses the WACC, indicating value creation is occurring.

While the operating margin is in decline, the company’s returns outperform a majority of competitors. Asahi also has a moderate Piotroski F-Score of 5 as well as steady earnings and revenue growth, which contribute to a three-star predictability rank.

Eaton Vance is the company’s largest guru shareholder with 0.09% of its outstanding shares. The

The fund increased its Inari Medical (

It now holds 151,170 shares, which represent 1.03% of the equity portfolio. GuruFocus estimates the fund has gained 0.21% on the investment so far.

The Irvine, California-based medical device company, which focuses on developing products to treat venous diseases, has a $4.38 billion market cap; its shares were trading around $87.92 on Friday with a price-earnings ratio of 195.05, a price-book ratio of 19.71 and a price-sales ratio of 23.54. 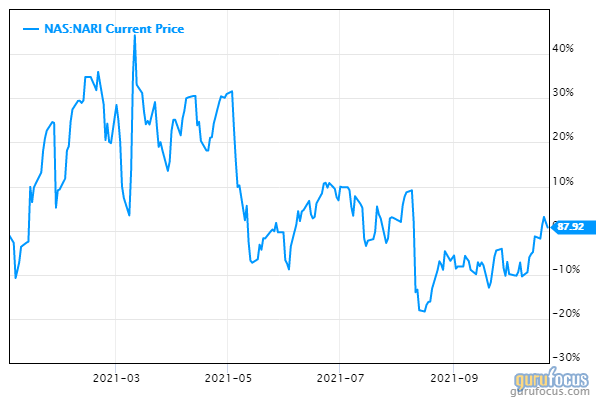 GuruFocus rated Inari’s financial strength 8 out of 10 on the back of a comfortable level of interest coverage as well as a robust Altman Z-Score of 85.93.The Sloan ratio, however, suggests it has poor earnings quality. The ROIC also exceeds the WACC, suggesting good value creation is occurring.

Despite having margins and returns that outperform a majority of industry peers, the company’s profitability did not fare as well with a 3 out of 10 rating.

Other new holdings the Worldwide Health Sciences Fund established during the quarter were in Moderna Inc. (

Eaton Vance’s $1.2 billion equity portfolio, which is composed of 54 stocks, is largely invested in the drug manufacturing industry with a weight of 39.23%.