Is the Market Overlooking the PayPal-Pinterest Opportunity?

When the news came out earlier this week that online payments giant PayPal Holdings Inc. (

PYPL, Financial) is in talks to acquire image-based social media platform Pinterest Inc. (PINS, Financial) for around $70 per share, or $45 billion in total, the market’s reaction seemed to be a nearly unanimous “what the heck?”

Not only are these two very different companies, the investing community is also looking on with sticker shock at that $45 billion valuation, which represents a premium of more than 25% to the stock’s price at the time that the acquisition rumors surfaced. If completed, this will be the largest-ever acquisition of a social media company, beating Microsoft Corp.’s (

MSFT, Financial) $26.2 billion LinkedIn acquisition by a long shot. In fact, it would be the biggest consumer internet deal of the past decade.

It’s not like Pinterest was cheap to begin with, and as of Oct. 22, it trades for a price of $57.79 and a price-earnings ratio of 275.24. The high valuation could be part of what’s keeping investors from bidding up the stock to its rumored acquisition price, which is what typically happens in these situations. 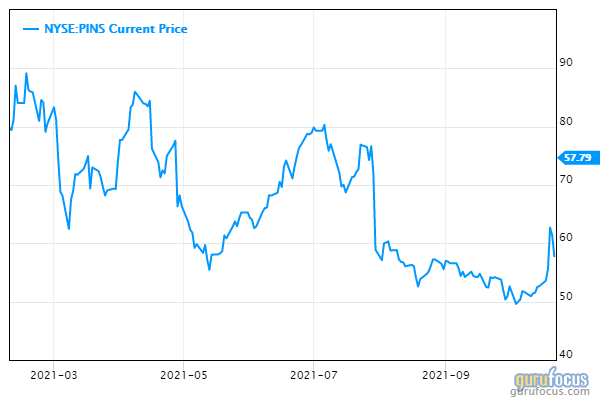 However, continuing to trade lower than the rumored acquisition price is a big red flag. Even if you don’t think the merger will be good for the companies, there are typically plenty of people looking to make a quick buck through merger arbitrage.

The news of this deal is leaving many scratching their heads as to why PayPal would pay such a high premium for a company with seemingly few synergies that is probably going to see revenue growth slow down now that the pandemic has done its job of pulling forward demand for social media. As a result, PayPal’s stock has gone nowhere but down the past few days. 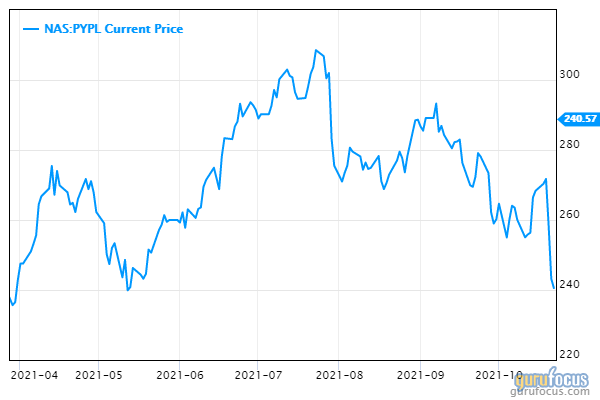 This is undeniably an expensive deal that has almost no overlap with PayPal’s existing business. However, that’s likely part of the appeal; PayPal has lately been pursuing a “super app” strategy similar to China’s WeChat, aiming to create a one-stop shop for customers’ financial, communication and other app needs. The real question is, can PayPal pull off such a strategy, or will it just end up becoming a victim of “diworseification?”

Near the end of this past September, PayPal launched its "super app," an app that combines payments, savings, bill pay, crypto, shopping, messaging and more into a single space.

Financial tools available on PayPal’s super app include direct deposit, bill pay, a digital wallet, peer-to-peer payments, shopping tools, crypto capabilities, two-day early paycheck access and more. PayPal does not plan to convert itself into a bank, but through its super app, it does aim to provide competitive features for those who are considering shifting more of their finances online. Through a partnership with Synchrony (

“We know that about half of customers in the United States don’t even have a savings account, much less one with a very competitive rate,” noted PayPal’s Julian King last month. “So all in all, we think that by bringing together the full set of solutions on the platform, it’s a really competitive offering for an individual.”

In addition to its financial offerings, the PayPal super app also includes a shopping hub, which is where the company is currently making use of its $4 billion acquisition of Honey, a free (for users) service that provides rewards and discounts for online shopping. Customers can browse discounts and make transactions through the in-app browser.

Notably, the super app is organized to easily accommodate new features. PayPal is clearly far from being finished with building out its super app offerings, and indeed, it has plenty of developing left to do if it wants to become as comprehensive as China’s WeChat or India’s Paytm.

It may seem at first glance that Pinterest’s social media offerings don’t have much synergy potential with PayPal. Digging deeper, we see that there still isn’t much synergy potential between these companies. If we define synergy as the financial benefit that companies realize upon merging, then it really seems like PayPal is losing out by paying a premium without even being able to save on operational costs.

However, synergy can also refer to the additional value created by the interactions of the newly merged companies. Pinterest mainly earns its revenue from ads, and if its ads get more views and clicks due to being integrated with PayPal’s super app and other platforms, that will drive value creation that would not have occurred without the merger. PayPal could also direct Pinterest users’ attention to other PayPal features or even offer user discounts.

Above and beyond revenue from ads and shopping, buying Pinterest would also give PayPal access to the image-based social media company’s database, which is nothing to sneeze at. User data is a crucial resource for companies when it comes to determining what customers want and how best to target ads and increase revenue per user.

“I think the market is still struggling to understand the logic, [but] I believe the market will get there just because strategically, this could be a game changer” if PayPal “executes it well,” argues Wedbush analyst Moshe Katri. “It’s all about user monetization.”

Even if the market is underestimating the potential acquisition deal in terms of how much value it could create for PayPal, uncertainties remain in terms of how well the company will be able to execute this business strategy. If it can’t achieve its goal of becoming a widely used super app, or if the synergies from its acquisitions turn out to be worth less than what it pays for said acquisitions, we could see the company lose value.

The massive Pinterest acquisition will also dilute existing shareholders, so in order to be worthwhile in the long run, this partnership will need to produce some major results. As of the end of the June quarter, PayPal had $5.7 billion in cash and cash equivalents, so the remaining price of the acquisition would need to come from debt or equity.

On the one hand, the super app is a relatively new and emerging trend in the U.S., so investors may find it hard to stomach the high price tag associated with such a large acquisition, especially when markets typically can only support one or two super apps and we don’t yet know who the winners of this will be in PayPal’s home country.

On the one hand, acquiring Pinterest would accelerate PayPal’s super app strategy by providing a variety of cross-selling synergies and social commerce opportunities as well as a treasure trove of data from the social media platform’s 400 million monthly users.

As with any company targeting high levels of growth, PayPal should be valued based on its expected future growth, which is an incredibly difficult factor to project – ask 10 analysts and you might get 20 answers. Successful super apps have included a wide variety of different offerings, most commonly messaging, video conferencing, shopping, financial services, food ordering/delivery, ridesharing, social media, entertainment and telehealth.

All things considered, I think PayPal is worth keeping an eye on as a potential super app leader in the U.S. For now, I’m more comfortable sitting on my hands than investing in the stock, but that may very well change once we get more details on the Pinterest acquisition, or when the company builds out more of its super app offerings. Besides, rumors are just rumors; maybe this deal will fail to materialize in the first place, which may not necessarily be a bad thing for PayPal.

I/we have no positions in any stocks mentioned, and no plans to initiate any positions within the next 72 hours.
The mention of stocks in this article does not at any point constitute an investment recommendation. Investors should always conduct their own careful research and/or consult registered investment advisors before taking action in the stock market.
The views of this author are solely their own opinion and are not endorsed or guaranteed by GuruFocus.com
Rating: 5 / 5 (2 votes)
Write for GuruFocus
Submit an article
How to use GuruFocus - Tutorials What Is in the GuruFocus Premium Membership? A DIY Guide on How to Invest Using Guru Strategies GuruFocus New Features