Domino's Pizza: The Story After the Pandemic

While food service as a sector was badly hit during the pandemic, the pizza delivery business managed to flourish in the tough times. Domino's Pizza (

DPZ, Financial), the world's largest pizza delivery chain, made hay while the sun shone upon them in 2020 and generated double-digit top-line growth.

The past few months have also been good for Domino’s, though it does face its fair share of inflationary challenges. Most investors within the foodservice space are aware that Domino’s business model is highly resilient to global economic shocks, which is why the company has given good returns even in the toughest of times. Let us analyze the stock in detail and evaluate whether the company is still a buy given the changing situation.

With over 18,000 stores in more than 90 markets worldwide, Domino's is the world's largest pizza restaurant chain in terms of global retail sales. The company is headquartered in Ann Arbor, Michigan. Domino's says it aims to provide high-quality food at a reasonable price, with easy ordering and efficient service made possible by technological innovations.

Its food delivery mobile application is one of the most successful in the world by a healthy margin, since pizza already held a strong delivery market even before the pandemic. Furthermore, the pizza delivery company is investing in the latest technologies, expanding globally and changing its business model. This could improve the company's competitive position by increasing the reliability of its delivery service in the coming years and by lowering costs.

Domino's Pizza operates a franchise model that decentralizes responsibility across its wide-ranging store base. It also lowers the capital investment required for expansion since franchisees put that up.

The company has benefitted heavily from the Covid-19 pandemic, as people became more likely to order for delivery. As a result, Domino’s revenues increased by 13.8% in fiscal 2020.

However, everything hasn’t necessarily been hunky-dory for Domino's as it is facing challenges while opening new stores due to the shortage of equipment and difficulty in staffing those stores. There is also uncertainty about the impact of restaurant-order aggregators such as DoorDash on Domino's, which result in lower margins for restaurants. For many years, Domino’s has been one of the cheapest at-home delivery foods. The pandemic has altered the consumer mindset in a way that consumers are now willing to accept high delivery fees. This has resulted in increased competitive pressure for Domino’s as consumers suddenly have more choices when deciding what to order for delivery.

However, the company has continued with menu innovations and new product introductions in various markets to compete with local pizza chains. There is little doubt that Domino's has built an efficient business that has increased its operating profit margin over time, which means the company could have space to lower prices, increase customer value, or use other tools to beat the competition.

Recently, Domino's Pizza reported its first drop in U.S. same-store sales in over a decade, as the world's largest pizza chain dealt with a slowdown in delivery demand and a tight labor market that resulted in a driver shortage.

As Covid-19 worries decrease, Americans have begun to eat out at restaurants after more than a year of ordering food at home, slowing sales at Domino's, which relies heavily on deliveries and take-away orders. To add to its woes, Domino's said a severe labor shortage in the U.S. had a negative impact on its business, forcing it to cut store operating hours and compromise on delivery service times.

To address the labor shortage, Domino's CEO Richard Allison stated that the company would increase the number of deliveries a driver could make per shift. Labor shortages coupled with the prevailing inflationary environment in the U.S. have resulted in a rise in input costs and forced the management to shell out a higher pay for delivery drivers and cooks.

Furthermore, the company sees drive-thru as a significant growth opportunity in late 2021 and beyond. Still, that push will put it more directly in competition with McDonald's (

MCD, Financial) and other established fast-food giants. The good part is that the company has proven its ability to expand its net income even in the recent quarter, which means it has sufficient leeway and cash to not just handle inflation but also to deal with competitive pressures. 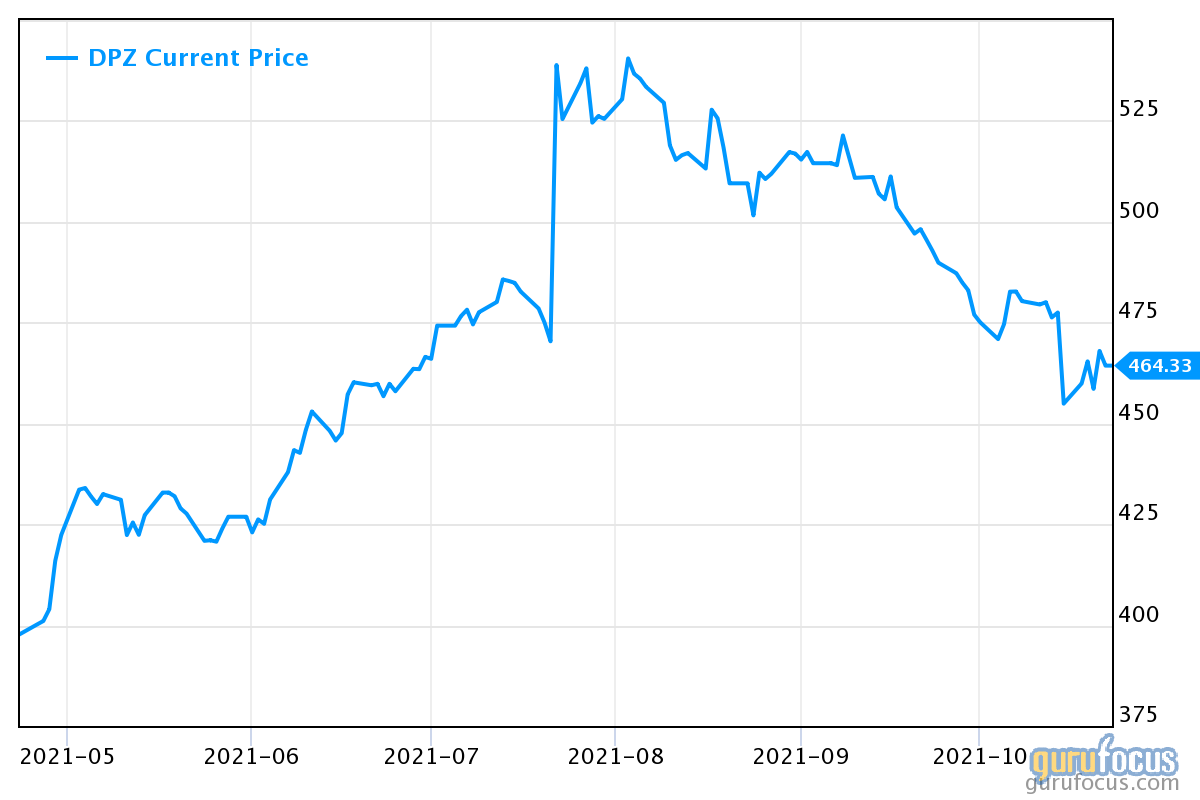 Domino's Pizza can be considered as reasonably valued at current levels, in my opinion, which is why it has been moving sideways for the past few weeks. The company’s enterprise-value-to-revenue multiple of 5.01 and its price-earnings ratio of 35.31 seem slightly on the higher side, but this is mostly on account of the excellent margins and recent growth.

There is little doubt that Domino’s has been a resilient business generating consistent sales and earnings growth during the pandemic and its immediate aftermath as a result of its lean operating model. Overall, I believe that the company is an excellent watchlist candidate with good investment potential after a pullback.