3 Candy Companies Gurus Are Trick-or-Treating With This Halloween 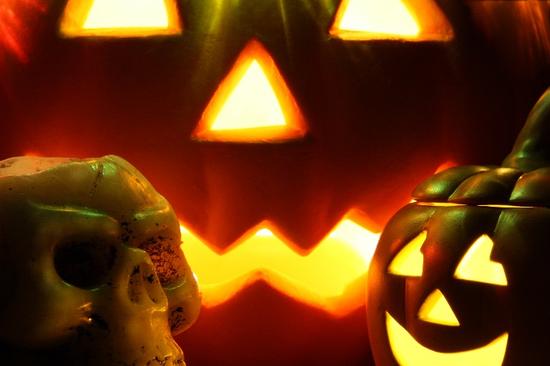 With the spookiest night of the year upon us, investors may want to consider companies that profit from Halloween festivities.

According to the National Retail Federation, total Halloween spending, which encompasses the costs of candy, costumes, decorations and greeting cards, is projected to reach a record $10.15 billion this year, up from $8.05 billion in 2020 as the economy continues to recover from the Covid-19 pandemic. Celebrants of the autumn holiday are expected to spend an average of $102.74 this year getting in the spirit.

As children across the U.S. look forward to dressing up and going trick-or-treating for sweets and other tasty treates, confectioners are among the companies that will benefit most as the NRF survey reported that consumers will spend an estimated $3 billion on candy this year.

The GuruFocus Aggregated Portfolio, a Premium feature, found popular candy companies among gurus as of Oct. 25 were Mondelez International Inc. (

With a combined equity portfolio weight of 15.28%, 21 gurus are invested in Mondelez International (

The Deerfield, Illinois-based company known for its Cadbury, Milka, Toblerone and Sour Patch Kids candy products, as well as Oreo and Chips Ahoy cookies, has an $84.36 billion market cap; its shares were trading around $60.35 on Monday with a price-earnings ratio of 19.99, a price-book ratio of 3.07 and a price-sales ratio of 3.1. 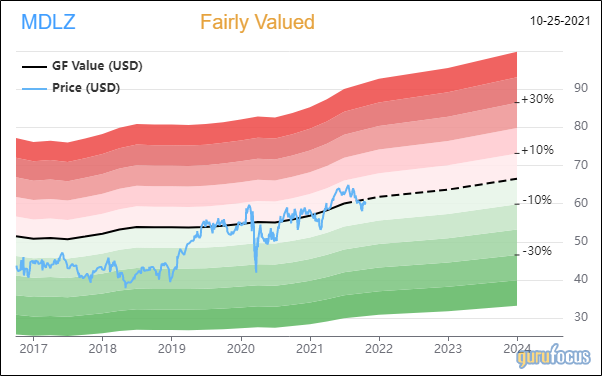 GuruFocus rated Mondelez’s financial strength 4 out of 10. Although the company has issued approximately $1.7 billion in new long-term debt over the past three years, it is at a manageable level due to having sufficient interest coverage. The Altman Z-Score of 2.47 also indicates the company is under some pressure.

Supported by an expanding operating margin, strong returns on equity, assets and capital that outperform more than half of competitors and a high Piotroski F-Score of 7 out of 9, meaning business conditions are healthy, the company’s profitability scored a 7 out of 10 rating. It also has a predictability rank of one out of five stars.

Holding a combined portfolio weight of 1.72%, eight gurus have positions in Hershey (

The confectioner headquartered in Pennsylvania, which is known for its popular chocolate treats like Kisses, Reese’s Peanut Butter Cups and Kit Kats, among others, has a market cap of $37.41 billion; its shares were trading around $181.19 onMonday with a price-earnings ratio of 26.39, a price-book ratio of 16.5 and a price-sales ratio of 4.36.

According to the GF Value Line, the stock appears to be modestly overvalued currently. 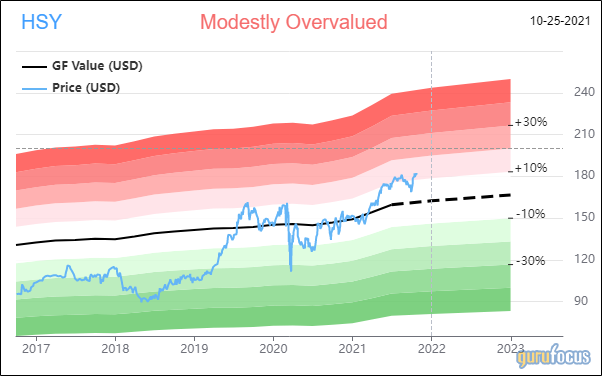 Hershey’s financial strength was rated 5 out of 10 by GuruFocus. While assets are building up at a faster rate than revenue is growing, the robust Altman Z-Score of 5.54 indicates the company is in good standing. The return on invested capital also eclipses the weighted average cost of capital, indicating value is being created as the company grows.

Boosted by an expanding operating margin and strong returns that top a majority of industry peers, the company’s profitability scored an 8 out of 10 rating. In addition to a high Piotroski F-Score of 8, Hershey has a 3.5-star predictability rank on the back of consistent earnings and revenue growth.

With a 1.55% stake, Simons’ firm is the largest guru shareholder of Hershey. Other top guru investors are Pioneer Investments,

The manufacturer of Tootsie Rolls, Tootsie Pops, Caramel Apple Pops, Dots, Junior Mints and Andes Chocolates, which is based in Chicago, has a $2.12 billion market cap; its shares were trading around $31.55 on Mondaywith a price-earnings ratio of 35.69, a price-book ratio of 2.82 and a price-sales ratio of 4.21. 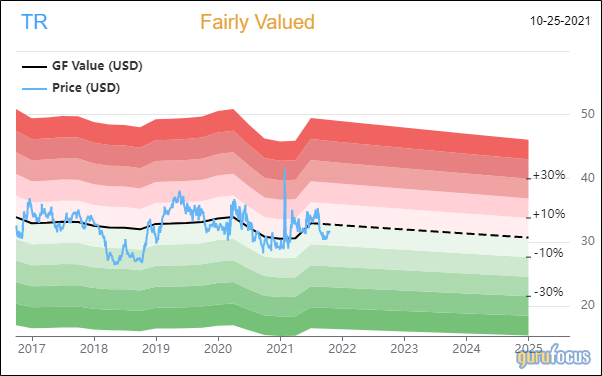 GuruFocus rated Tootsie Roll’s financial strength 7 out of 10. Although the company has issued new long-term debt over the past three years, it is still at a manageable level as a result of a comfortable level of interest coverage. The high Altman Z-Score of 6.28 indicates the company is in good standing. The ROIC also overshadows the WACC, indicating value creation is occurring.

The company’s profitability scored a 6 out of 10 rating. While the operating margin is in decline, it is still outperforming versus competitors. Tootsie Roll also has strong returns that outperform a majority of industry peers and a moderate Piotroski F-Score of 4, which indicates conditions are typical for a stable company, but the one-star predictability rank is on watch as a result of revenue per share declining over the past five years.