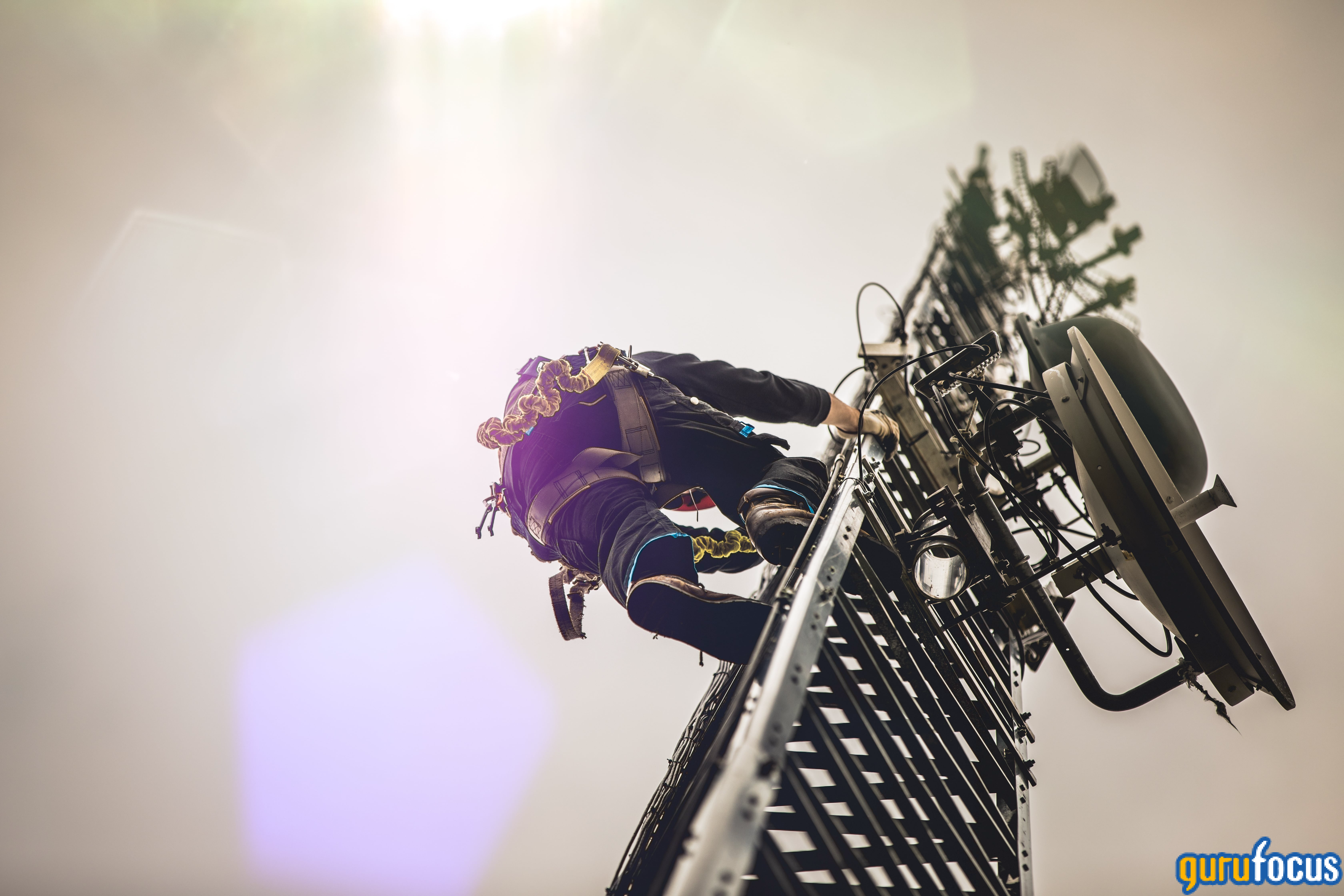 Alan Fournier (Trades, Portfolio) has revealed his portfolio for the third quarter of 2021. His top trades include selling out of his T-Mobile US Inc. (TMUS, Financial) holding, reducing his Intel Corp. (INTC, Financial) and DISH Network Corp. (DISH, Financial) positions, an addition to Amazon.com Inc. (AMZN, Financial) and a new buy into Airspan Networks Holdings Inc. (MIMO, Financial).

Fournier famously has never taken a finance or accounting course. His investment strategy is a combination of what he learned while working at Bernstein, Pzena Investment and Appaloosa Management. His firm’s strategy focused on a buy and hold, long-short approach that included hedging, leverage, option trading and short-selling before it was converted to a family office in 2018. In terms of long positions, Fournier places emphasis on growth and value qualities.

At the end of the quarter, Fournier’s portfolio contained 21 stocks with four new holdings. It was valued at $352 million and has seen a turnover rate of 8%. His top holdings include DISH Network, Micron Technology Inc. (

TMUS, Financial), selling the remaining 179,642 shares. The shares traded at an average price of $139.34 during the quarter, landing the guru at a total estimated gain of 54.64% on the holding. Overall, the sale had a -6.18% impact on the equity portfolio. 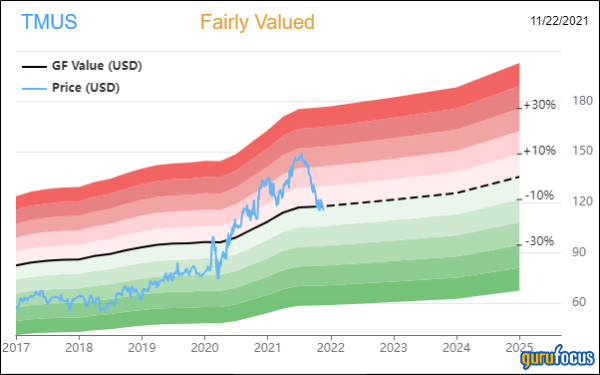 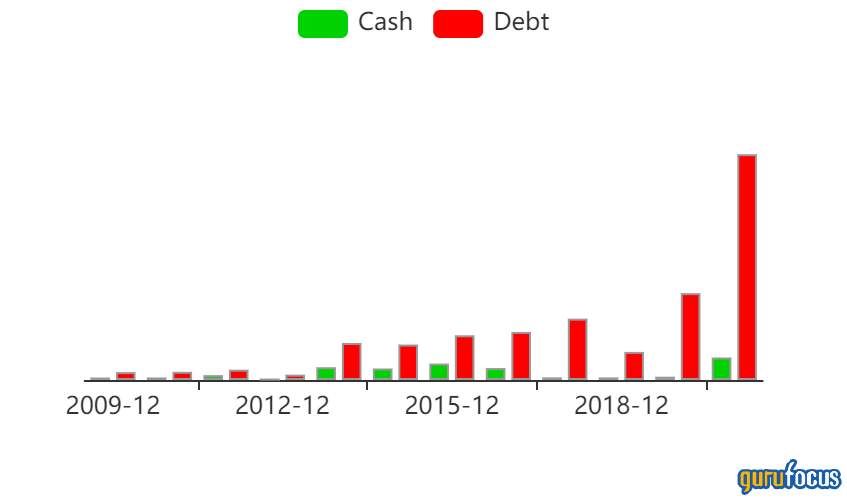 Other top guru shareholders in T-Mobile (

Intel is the world's largest chipmaker. It designs and manufactures microprocessors for the global personal computer and data center markets. Intel pioneered the x86 architecture for microprocessors. It was the prime proponent of Moore's law for advances in semiconductor manufacturing, though the company has recently faced manufacturing delays. While Intel's server processor business has benefited from the shift to the cloud, it has also been expanding into new adjacencies as the personal computer market has stagnated. These include areas such as the internet of things, artificial intelligence and automotive.

As of Nov. 22, the stock was trading at $50.21 per share with a market cap of $203.94 billion. The GF Value Line shows the stock trading at a modestly undervalued rating. 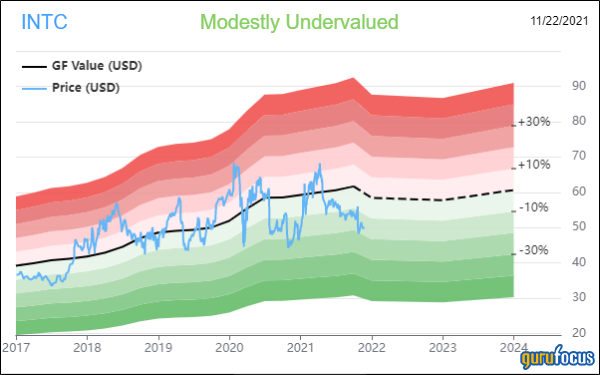 GuruFocus gives the company a financial strength rating of 6 out of 10, a profitability rank of 9 out of 10 and a valuation rank of 10 out of 10. There is one severe warning sign issued for a declining gross margin. Intel has maintained strong revenue growth over the last several years, but has seen a small slip in net income. 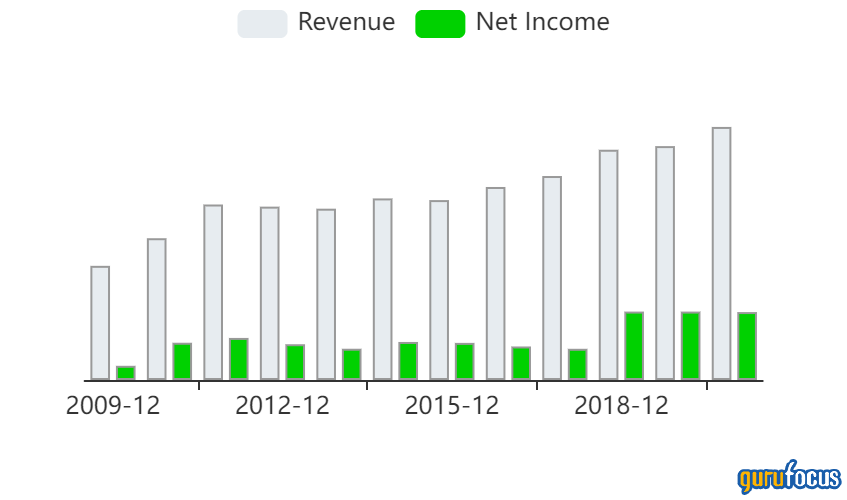 Amazon is a leading online retailer and one of the highest-grossing e-commerce aggregators, with $386 billion in net sales and approximately $482 billion in estimated physical and digital online gross merchandise volume, or GMV, in 2020. Retail-related revenue represented approximately 83% of total sales, followed by Amazon Web Services' cloud computing, storage, database and other offerings (12%) and advertising services and co-branded credit cards (6%). International segments constituted 27% of Amazon's non-AWS sales in 20202, led by Germany, the United Kingdom and Japan. 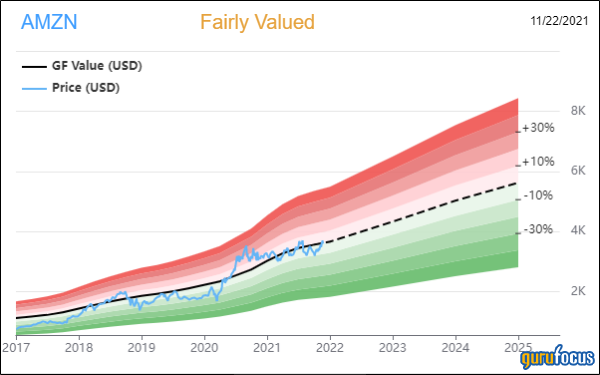 GuruFocus gives the company a financial strength rating of 6 out of 10, a profitability rank of 8 out of 10 and a valuation rank of 3 out of 10. There is currently one severe warning sign issued for assets growing faster than revenue. The company has drastically increased cash flows over the last decade, opening up plenty of opportunities to reinvest and develop new technology. 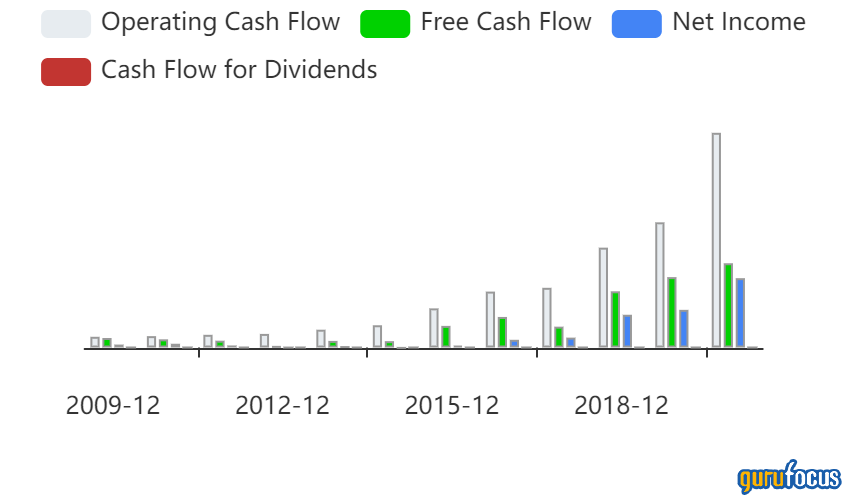 MIMO, Financial). The holding was established with the purchase of 1.04 million shares that traded at an average price of $7.76 during the quarter. Overall, the purchase had a 1.99% impact on the equity portfolio and GuruFocus estimates the total loss of the holding at 20.47%.

Airspan Networks Holdings is a provider of groundbreaking, disruptive software and hardware for 5G networks, and end-to-end Open RAN solutions that provide interoperability with other vendors. It is positioned with 5G indoor and outdoor, Open RAN, private networks for enterprise customers and industrial use applications, fixed wireless access and CBRS solutions to help mobile network operators deploy their networks.

On Nov. 22, the stock was trading at $6.10 per share with a market cap of $444.39 million. There is not currently enough data to display a GF Value Line and share prices have fallen since August.

The company is currently at loss, although it has posted several quarters of earnings. Currently, the operating and net margins are both negative. 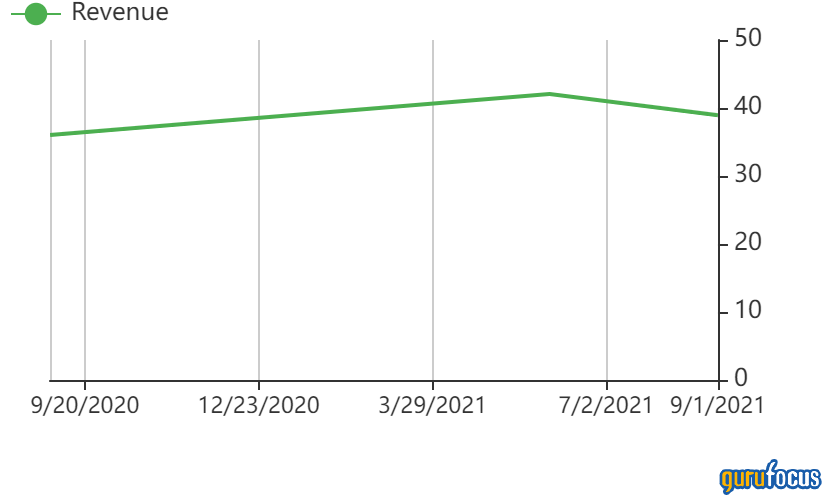 DISH, Financial) holding. Fournier cut the holding by 11.04% with the sale of 185,000 shares. The shares traded at an average price of $42.61 during the quarter. Overall, the sale had a -1.84% impact on the equity portfolio and GuruFocus estimates the total gain of the holding at 0.68%.

From its founding in the 1980s, Dish Network has primarily focused on the satellite television business, capitalizing on technological advancements to expand its reach. The company now serves 9 million U.S. customers via its network of owned and leased satellites. Dish launched an internet-based television offering under the Sling brand in 2015 and now serves about 2.5 million customers on this platform. Dish's future, however, hinges primarily on the wireless business. The company has amassed a large portfolio of spectrum licenses over the past decade, spending more than $22 billion in the process, and is now building a nationwide wireless network. It acquired Sprint's prepaid business, serving about 9 million customers, as the entry point into the wireless retail market.

As of Nov. 22, the stock was trading at $33.80 per share with a market cap of $17.87 billion. According to the GF Value Line, the stock is trading at a modestly undervalued rating. 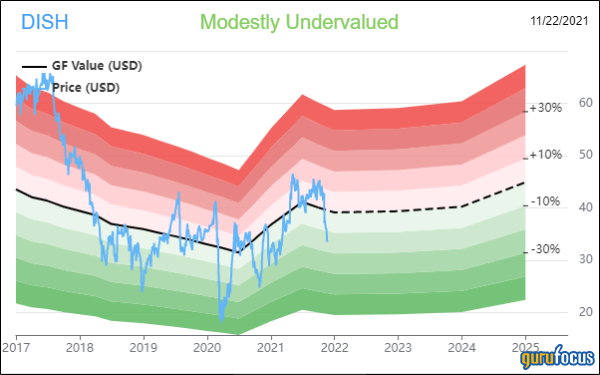 GuruFocus gives the company a financial strength rating of 5 out of 10, a profitability rank of 7 out of 10 and a valuation rank of 10 out of 10. There are two severe warning signs issued for declining revenue per share and an Altman Z-Score placing the company in the distress column. In line with the warning signs, the company’s return on invested capital has struggled to support the weighted average cost of capital, indicating struggles with capital efficiency. 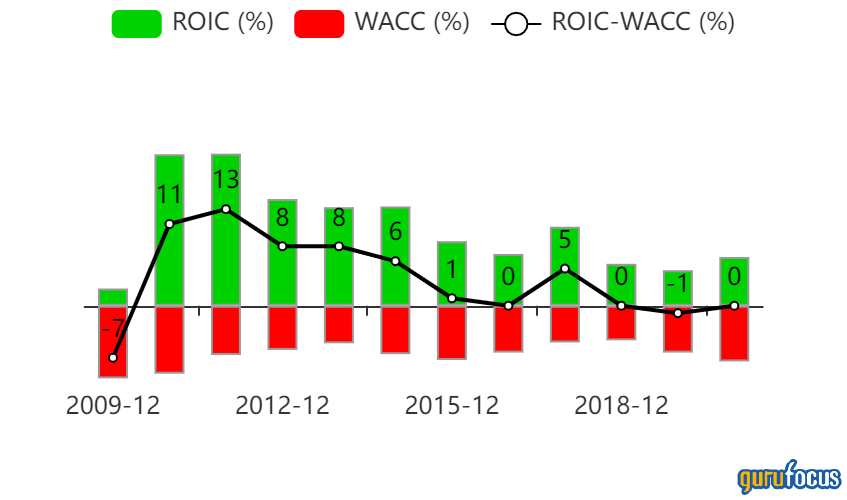