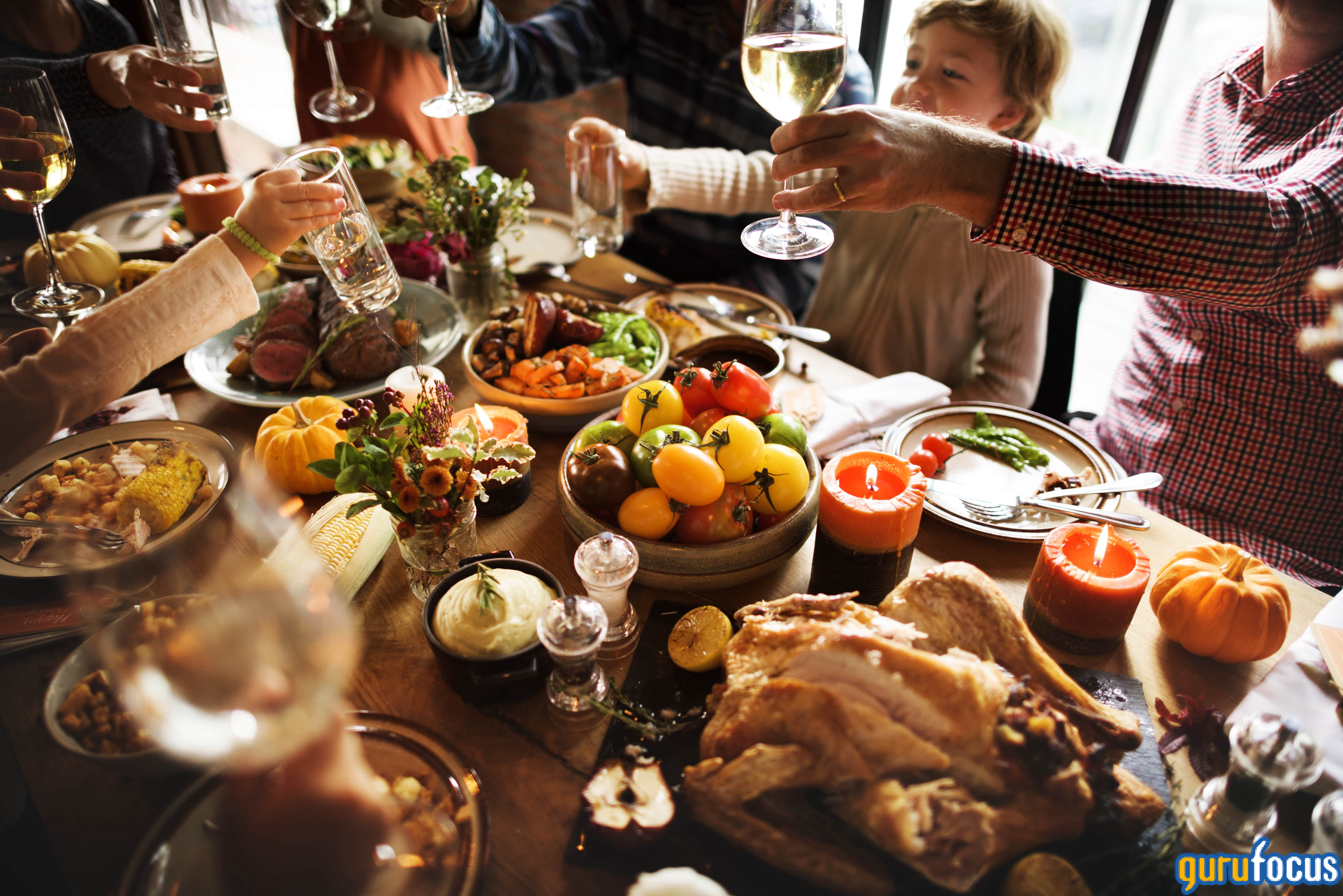 With Thanksgiving once again upon us, investors may want to consider looking at companies that profit from the annual feast that brings family and friends together.

Due to rising food prices, caused by a combination of shortages, supply chain disruptions and inflation, the cost of the traditional meal served at the fall holiday is projected to be significantly higher this year than in the past. As a result, good value opportunities may be found among consumer defensive stocks that are popular with gurus.

On Nov.23, the GuruFocus Aggregated Portfolio, a Premium feature, found farm products and packaged foods companies that were held by more than 10 gurus as of the end of the third quarter included General Mills Inc. (

With a combined equity portfolio weight of 1.79%, 14 gurus are invested in General Mills (

The Minneapolis-based company known for its Pillsbury, Betty Crocker and Cheerios products has a $38.19 billion market cap; its shares were trading around $63.17 on Tuesdaywith a price-earnings ratio of 16.75, a price-book ratio of 3.94 and a price-sales ratio of 2.13. 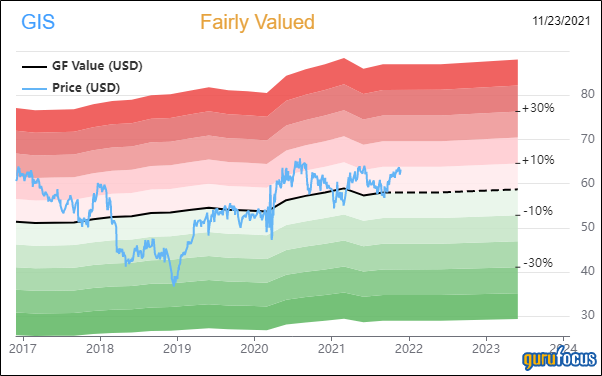 GuruFocus rated General Mills’ financial strength 4 out of 10. Although the company has adequate interest coverage, the Altman Z-Score of 2.59 indicates it is under some pressure. The return on invested capital, however, overshadows the weighted average cost of capital, so value is being created as the company grows.

Supported by an expanding operating margin, strong returns on equity, assets and capital that outperform more than half of competitors and a high Piotroski F-Score of 7 out of 9, meaning business conditions are healthy, the company’s profitability scored an 8 out of 10 rating. It also has a predictability rank of 2.5 out of five stars. According to GuruFocus, companies with this rank return an average of 7.3% annually over a 10-year period.

Of the gurus invested in General Mills,

Holding a combined portfolio weight of 11.62%, 14 gurus have positions in Tyson Foods (

The processor of chicken, beef and pork products, which is headquartered in Springdale, Arkansas, has a market cap of $30.35 billion; its shares closed at $83.20 on Tuesday with a price-earnings ratio of 9.98, a price-book ratio of 1.71 and a price-sales ratio of 0.65. 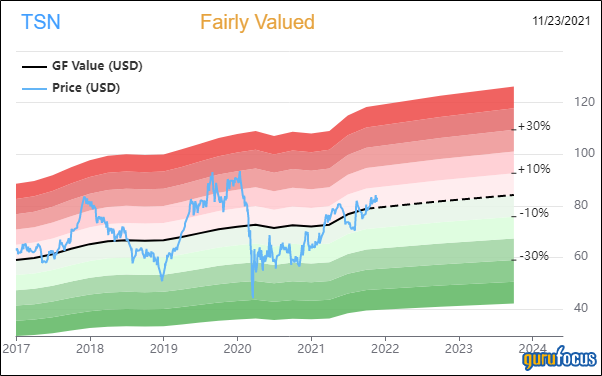 Tyson’s financial strength was rated 6 out of 10 by GuruFocus. In addition to adequate interest coverage, the Altman Z-Score of 3.48 indicates the company is in good standing even though assets are building up at a faster rate than revenue is growing. The ROIC also eclipses the WACC, so value creation is occurring.

The company’s profitability fared better, scoring an 8 out of 10 rating. In addition to operating margin expansion, the company is supported by returns that outperform industry peers, consistent earnings and revenue growth, a high Piotroski F-Score of 7 and a four-star predictability rank. GuruFocus says companies with this rank return, on average, 9.8% annually.

Fourteen gurus have positions in Kraft Heinz, representing a combined weight of 9.79%.

The Chicago-based owner of the Oscar Mayer, Kraft, Velveeta, Heinz and Jell-O brands has a $43.8 billion market cap; its shares were trading around $35.78 on Tuesdaywith a price-earnings ratio of 19.14, a price-book ratio of 0.88 and a price-sales ratio of 1.69. 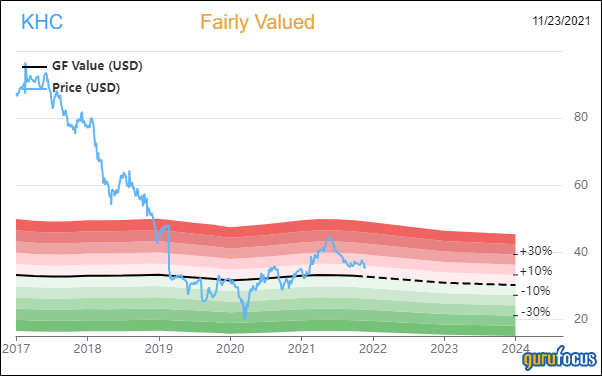 Weighed down by weak interest coverage and a low cash-to-debt ratio of 0.1, Kraft Heinz’s financial strength was rated 4 out of 10 by GuruFocus. The Altman Z-Score of 1.04 warns the company could be in danger of bankruptcy if it does not improve its liquidity. It is also struggling to create value as the WACC exceeds the ROIC.

The company’s profitability fared better with a 7 out of 10 rating, driven by an expanding operating margin. Its returns, however, underperform over half of its competitors. Kraft Heinz also has a high Piotroski F-Score of 7. Despite recording a decline in revenue per share over the past five years, the company has a one-star predictability rank. GuruFocus data shows companies with this rank return an average of 1.1% annually.

DAR, Financial) is held by 12 gurus with a combined equity portfolio weight of 3.57%.

Headquartered in Irving, Texas, the company, which produces feed, food and fuel from recycled animal products in an effort to reduce waste, has a market cap of $11.84 billion; its shares were trading around $73.09 on Tuesday with a price-earnings ratio of 22.73, a price-book ratio of 3.69 and a price-sales ratio of 2.75. 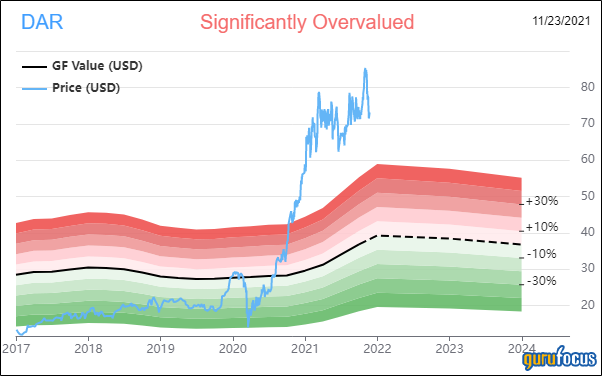 GuruFocus rated Darling Ingredients’ financial strength 5 out of 10. In addition to sufficient interest coverage, the company’s Altman Z-Score of 4.41 indicates it is in good standing. The WACC surpasses the ROIC, however, so it is struggling to create value.

The company’s profitability scored a 6 out of 10 rating. Even though the operating margin is in decline, its returns outperform a majority of industry peers. Darling Ingredients also has a high Piotroski F-Score of 8 and a one-star predictability rank.

Of the gurus invested in Darling Ingredients,

Representing a combined equity portfolio weight of 3.21%, 11 gurus are invested in Hormel Foods (

The Austin, Minnesota-based company, whose brands include Jennie-O turkey, has a $23.64 billion market cap; its shares were trading around $43.41 on Wednesday with a price-earnings ratio of 27.58, a price-book ratio of 3.48 and a price-sales ratio of 2.31. 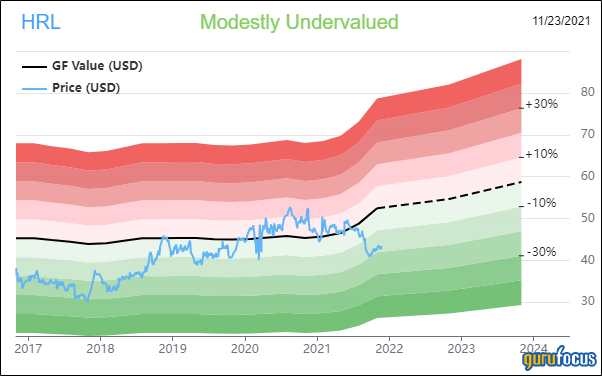 GuruFocus rated Hormel’s financial strength 6 out of 10. Aided by a comfortable level of interest coverage, the robust Altman Z-Score of 4.56 indicates the company is in good standing. Good value creation is also occurring since the ROIC significantly outpaces the WACC.

The company’s profitability also fared well with a 7 out of 10 rating. Although the operating margin is declining, returns outperform a majority of competitors. Hormel has a low Piotroski F-Score of 2, however, which suggests business conditions are in poor shape. Additionally, the one-star predictability rank is on watch.

Additional farm products and packaged food companies that are broadly held by gurus as of the third quarter include JM Smucker Co. (