A Pair of Retailers Trading at a Steep Discount

Retailers were hit especially hard in 2020 as the Covid-19 pandemic severely limited store traffic. Revenue and earnings plunged as a result, making paying a dividend a luxury many companies could not afford.

The operating environment has improved as the rollout of vaccines has led to the softening of social distancing requirements. As a result, some of the retailers that cut or suspended their dividends last year have reinstated their distributions.

In this article, we will look at two companies that have begun paying dividends again and also trade at a significant discount to their intrinsic value estimates based on the GuruFocus Value chart.

GPS, Financial) is a well-known clothing and accessory retailer. The company operates more than 3,800 apparel stores worldwide spread out among brands such as Gap, Old Navy and Athleta. Gap has a market capitalization of $6.6 billion and revenues approaching $17 billion over the last four quarters.

Gap suspended its dividend following the first payment of 2020 as it dealt with the unknown related to the pandemic. The company’s dividend had a compound annual growth rate (CAGR) of more than 10% for the prior 10-year period as Gap aggressively raised its payments to shareholders. The company raised its dividend on 10 sperate occasions between 2005 and 2019.

Gap began paying the same pre-pandemic quarterly dividend of 24.25 cents in April of 2021. However, the company cut its dividend by more than half for the very next payment.

Still, the annualized dividend of 48 cents equates to a dividend yield of 2.7% today. This is twice the average yield of the S&P 500 Index and nearly in-line with the yield of 2.8% that the stock averaged from 2010 through 2019.

Wall Street analysts expect Gap to produce earnings per share of $1.54 this fiscal year. Using the current dividend, the projected payout ratio is just 31%. This is below Gap’s long-term average payout ratio of 42%.

Looking at the GuruFocus Value chart, Gap looks to be trading below its intrinsic value: 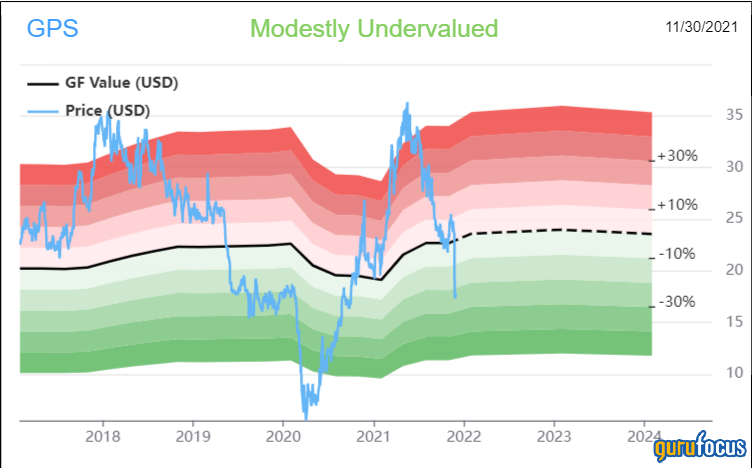 Gap has a GF Value of $22.97. With shares closing Monday’s trading session at $17.80, this implies a price-to-GF-Value ratio of 0.77. The stock could return 29% if it were to reach its GF Value. Add in the dividend and total returns could push into the low 30% range.

ROST, Financial) is a discount apparel and home fashion chain. The company has more than 1,600 stores in 40 U.S. states. Ross Stores is valued at just under $40 billion and produced revenue in excess of $18 billion over the last 12 months.

Prior to the dividend suspension, Ross Stores had increased its dividend for 25 consecutive years. The dividend has a CAGR of more than 21% for the previous decade.

The annualized dividend of $1.14 results in a current yield of just 1% today, which is just below the stock’s 10-year average yield of 1.1%.

Ross Stores is expected to earn $4.81 this fiscal year, giving the company a projected payout ratio of just 24%. While low, it is higher than the 10-year average payout ratio of 19%.

The GF Value chart shows that the stock is trading below its intrinsic value: 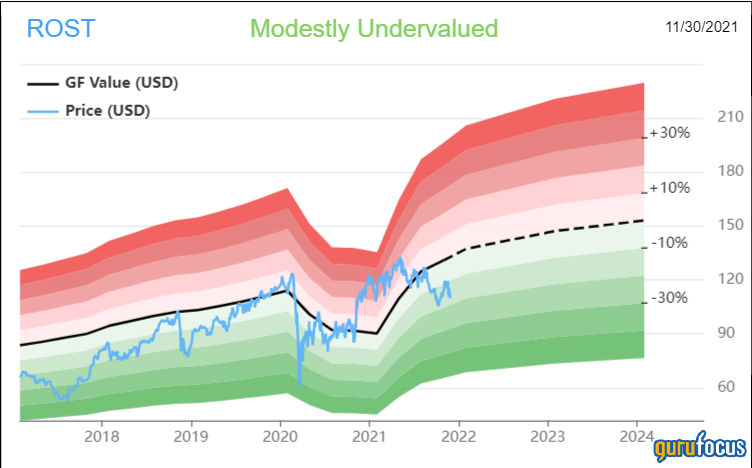 Ross Stores has a GF Value of $132.91. Based on the most recent closing price of $111.66, Ross Stores has a price-to-GF Value ratio of 0.84. Reaching the GF Value would mean a 19% gain in share price from current levels. The dividend could put total returns close to 20%.

Retail can be a fickle business as the performance of most names in the sector showed at the onset of the pandemic. Most players in this industry are running high-debt, narrow-margin operations, which makes it easy to go belly-up when economic conditions become tough. Even so, Covid-19 vaccines have made it easier and safer for shoppers to return to stores, allowing businesses to return to paying dividends as results have improved.

The Gap and Ross Stores both suspended their dividends during the beginning of the pandemic, but have brought them back already this year. While Gap did cut its dividend by more than half this year, the stock’s yield is attractive in this low rate environment. Ross Stores has a low yield, but had an impressive dividend growth streak going prior to the pandemic. Both companies also have very low projected payout ratios.