In times of volatility like we are currently experiencing, investors need to fill their portfolios with solid companies selling products or services that people need in good times and bad. They also need companies with pricing power if inflation continues to roar ahead or if the pandemic intensifies. The companies must pay a good dividend, so there is some income.

The two companies I am highlighting today have that, and they are undervalued too. Both also have received a stamp of approval from

Warren Buffett (Trades, Portfolio), who paid a higher price for them than what investors have to pay today.

Buffett owns 3.84% of the U.S. telecommunications giant. He established his current position in the third quarter of 2020. According to GuruFocus, his cost basis per share is $57.73, so the stock is offering quite a bargain currently.

The GF Value Line indicates that the stock is modestly undervalued. 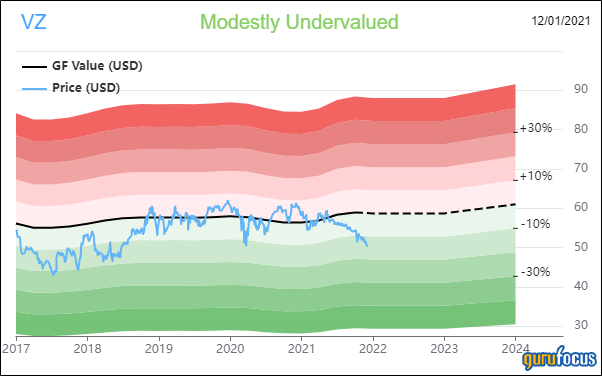 The company pays a solid dividend of 4.9%. The company is the largest member of the oligopoly (with AT&T (

T, Financial) and T-Moblile (TMUS, Financial)) dominating the U.S. wireless spectrum. The company is a cash-generating machine. The following table compares Verizon's key metrics with some of its North American peers, among which it is the largest.

While Verizon has a large debt load (as do most telecoms), the massive cash flow means the debt is not much of a burden. The company's financial strength is rated as A++ by Value Line analysts. I can see Verizon as an $80-plus stock three to five years from now.

Buffett owns 26.58% of this food company. In fact, he was one of the founders of the company when he helped engineer the creation of the company (with the Brazilian investment company, 3G) through the merger of Heinz and Kraft in 2015. Buffett's cost basis on his stake is shown as $75.34 per share (but this is likely incorrect as he acquired his stake via his previous ownership of Heinz). While the company has been through its ups and downs, he has not sold a share. This means he has confidence in the company and is holding for the long term.

While the GF Value Line indicates the stock is fairly valued, I believe it is actually undervalued. 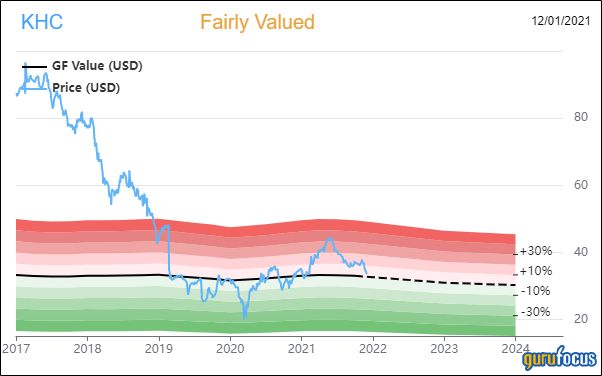 The company is a work in progress, having lost its way when following 3G's financial playbook of savage cost-cutting and zero-based budgeting. The company has now reversed course and is focusing on innovation and marketing. Free cash flow is coming back. The company is strengthening its balance sheet and divesting low-growth businesses. The pandemic certainly helped get the company back on track. The dividend is generous at 4.77% and looks safe.

GuruFocus' projected free cash flow measure is good indicator of value given the company is in the middle of a turnaround. This method was designed for companies with inconsistent earnings and is based on normalized free cash flow and book value. The intrinsic value of Kraft Heinz of between $45 and $50 looks right to me. I am willing to wait until Mr. Market catches up with the value and meanwhile enjoy the excellent dividend. I can see this stock to closer to $60 in three to five years.

The current bout of volatility has revealed some good bargains, but we don't know what the next six months are going to look like. It is better to be safe than sorry and stick to good, quality names. As Buffett once said, "I don't look to jump over seven-foot bars: I look around for one-foot bars that I can step over." It could be argued that Verizon and Kraft Heinz are two one-foot bars we won't be sorry we stepped over in five years' time.