Merck's Selloff Is an Overreaction

This is one of those cases where Mr. Market is offering a discount for no good reason. 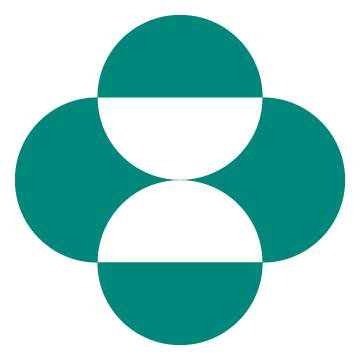 The stock market has overreacted to the recent negative developments for Merck & Co. (

MRK, Financial), in my opinion. The ostensible cause of the recent fall in Merck's stock price is because of the less compelling efficacy data for its Covid-19 antiviral treatment as compared to data for rival Pfizer Inc. (PFE, Financial).

Merck's pill, developed with Ridgeback Biotherapeutics, is a nucleoside analogue with a mechanism of action that aims to introduce errors into the RNA genetic code of the virus. Because the drug generates random mutations into the virus, it is difficult for the coronavirus to evolve and become resistant. Paxlovid is a combination of Pfizer’s investigational antiviral PF-07321332 and a low dose of ritonavir, an antiretroviral medication traditionally used to treat HIV. The treatment disrupts the replication of SARS-CoV-2 in the body by binding to the 3CL-like protease, an enzyme crucial to the virus’ function and reproduction.

Both companies tested their respective antiviral pills in non-hospitalized, unvaccinated, mild-to-moderate Covid patients who were at risk of developing severe disease. According to the study, Merck and Ridgeback Biotherapeutics' antiviral drug Molnupiravir reduced the risk of hospitalization and death by roughly 30% when patients began taking the drug within five days of symptoms beginning. In comparison, Pfizer's antiviral drug, Paxlovid, cut down on the same risk by 89% when patients began the two-pill regimen within three days of symptoms appearing. Pfizer has not yet shared details of its study.

The results sent Merck's stock into a tailspin while Pfizer's stock shot up. The movements of these two stocks over the last three months are captured by the chart below: 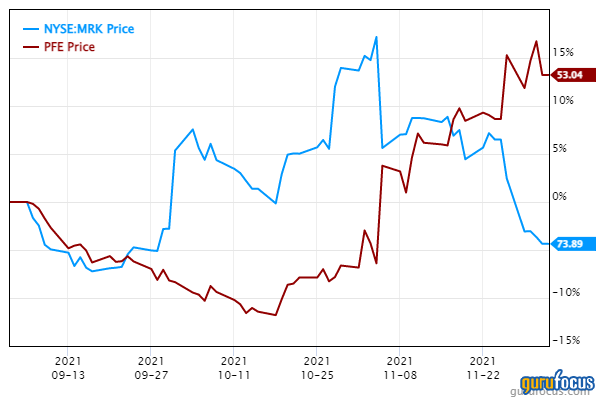 Molnupiravir, (brand name: Lavgevrio ) which has already been approved in the U.K., was recommended for U.S. approval by the FDA expert panel earlier this week, and Pfizer's pill is also expected to be approved in the next few weeks. Merck already has a deal with both the U.S. and U.K. governments to supply both countries with millions of doses and is unlikely to have any problems selling millions more around the world. There is little doubt the drug will be a sucess.

It's not an either/or situation since Pfizer is unlikely to be able to produce enough pills for the entire world. Both therapies will coexist and may even in the future be used together to delay development of resistance in the virus. So, for investors to bid up Pfizer and sell off Merck is illogical. Both these pills are stunning scientific achievements and have the potential to change the trajectory of the pandemic by keeping most people out of the hospital if given early enough in the infection. While vaccines remain the first line of defence, these Covid-19 antivirals will likely become a solid second line of defence.

The drugs work by different mechanisms of action, and it is likely both will have a place in therapeutics.

Unlike Pfizer, which owns its drug Paxlovid, Merck will have to share the risks and rewards with partner Ridgeback. So, both the upside and downside for Molnupirvir is limited. Merck also isn't solely reliant on developing Covid-19 therapies. It is a well-established pharmaceutical giant with many successful drugs and treatments to its name. Merck's short- and medium-term success depends on the performance of its oncology (anti-cancer) franchise led by Keytruda, which is now second biggest drug in history.

After the recent selloff, Merck is now undervalued according to the GF value chart: 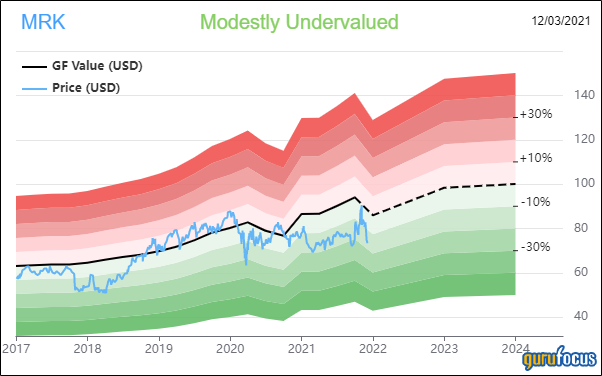 In my opinion, both Merck and Pfizer are strong buys at this point due to future upside from their Covid-19 therapeutics. Pfizer has achieved outstanding success in both the Covid-19 vaccine arena and now with Paxlovid. While Merck Covid-19 data is not as compelling, its dependence on the Covid drug is not much, and it is now become undervalued given its overall potential. I can see Merck stock go to over $100 in the next one to three years.

I am/we are Long MRK, PFE
The views of this author are solely their own opinion and are not endorsed or guaranteed by GuruFocus.com
Rating: 5 / 5 (1 votes)
Bookmark