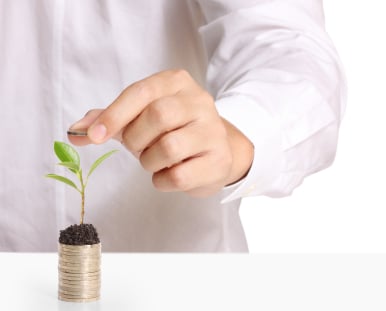 For investors looking for income, the Dividend Aristocrat Index is an excellent place to begin their research. There are just 65 such companies that meet the criteria for this exclusive group, which include having at least 25 consecutive years of dividend growth and being a member of the S&P 500 Index.

Companies within this index have raised dividends through all portions of the economic cycle, proving that they can withstands the rigor of a recession.

In this article, we will take a closer look at three Dividend Aristocrats that recently raised their dividends.

First up is Ecolab Inc. (

ECL, Financial), which produces and markets chemicals and services for regular and deep cleaning, pest elimination, maintenance and sanitizing. The company’s end markets include education, food and beverage, food service, healthcare and government. Ecolab has a market capitalization of just over $63 billion and generated revenue of $12 billion in 2020.

Ecolab raised its dividend by 6.3% for the Jan. 18, 2022 payment date, extending the company’s dividend growth streak to 36 consecutive years. The company’s dividend has a compound annual growth rate (CAGR) of just over 11% since 2011. The recent raise is almost half of the long-term average, but three times the size of the dividend raise that shareholders received in 2020.

The new annualized dividend of $2.04 gives Ecolab a forward yield of 0.9%. For context, the average yield over the last decade was 1.2%, according to Value Line.

Shareholders will receive a total dividend of $1.95 in 2021. With Wall Street analysts calling for earnings per share of $4.81 for the year, Ecolab has an expected payout ratio of 41%, slightly higher than the 10-year average payout ratio of 32%.

The stock trades for close to $230 per share at the moment, implying a forward price-earnings ratio of 47.8. Analysts expect that earnings per share will grow materially next year to $6.00 per share, resulting in a multiple of 38.3 times next year’s earnings. Ecolab has routinely traded with a premium valuation, more than 26 times earnings over the last decade, but the stock is richly priced even on a historical basis.

The GuruFocus Value chart paints the stock in a better light as Ecolab looks to be trading closer to its intrinsic value. 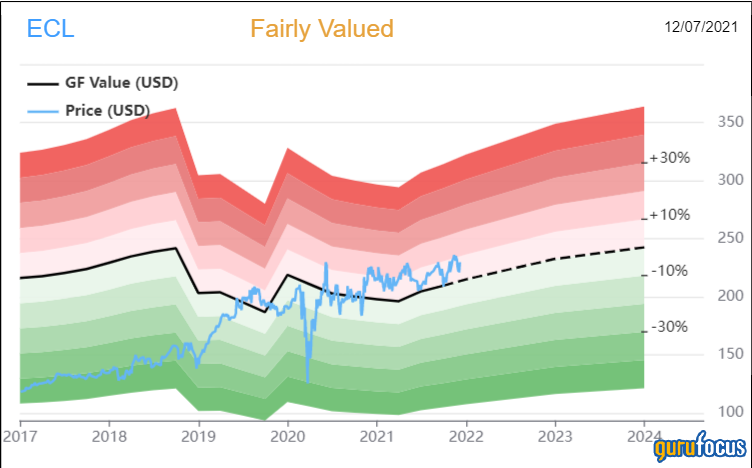 Ecolab has a GF Value of $213.38, giving shares a price-to-GF-Value ratio of 1.08. The stock would decline 7.2% if it were to trade with its GF Value. Ecolab is rated as fairly valued by GuruFocus.

Next up is McCormick & Company Incorporated (

MKC, Financial), one of the largest producers and marketers of seasonings, spices and condiments in the world. The company controls approximately 20% of the global seasoning and spice market. McCormick is valued at nearly $24 billion and had revenue of $5.6 billion last year.

McCormick raised its dividend by 8.8% for the Jan. 10, 2022 payment date. This marks the company’s 36th consecutive year of dividend growth. The dividend has a CAGR of 9.2% over the last decade, so the most recent increase is very close to its long-term average.

However, the stock appears to be somewhat undervalued according to the GuruFocus Value chart: 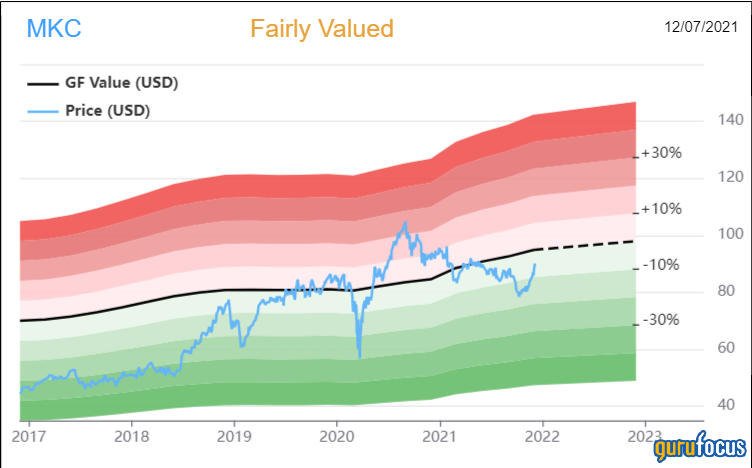 McCormick has a GF Value of $94.90, giving shares a price-to-GF-Value ratio of 0.95. Shares are rated as fairly valued, but investors would see a 5.4% gain from current levels if McCormick were to reach its GF Value.

The final name we will discuss here is Nucor Corporation (

NUE, Financial), which is the largest publicly traded U.S. manufacturer of steel. The company provides a wide variety of steel products, including hot rolled steel shapes, cold finished bars, decks and joists. Nucor is valued at close to $32 billion and produces annual sales of $20 billion.

Nucor raised its dividend by 23.5% for the Feb. 11, 2022 payment. This raise was significant for two reasons. First, this it is the largest increase in more than a decade. The dividend has compounded at 1.1% over the last decade, so this raise is well above what shareholders have come to expect from the company. Second, this raise extends Nucor’s dividend growth streak to 49 years. The company sits just one year away from attaining Dividend King status.

The new annualized dividend of $2.00 results in a forward yield of 1.7% compared to the stock’s long-term average yield of 3.1%.

Shareholders received $1.62 of dividends per share this year. With analysts expecting the company to earn $23.73 per share in 2021, the payout ratio is just 7%. This is incredibly low, but likely not sustainable long-term given the company’s historical performance and cyclical nature. The average payout ratio over the last decade is 66% and results have been erratic during this period of time. Analysts project that earnings per share will decline to $15.46 next year, showing how varied the company’s performance can be.

While Nucor might look inexpensive relative to its own history, it behooves investors to note that the company’s valuations have varied substantially over the last decade. As Peter Lynch observed, due to the extreme variation in their earnings, cyclical stocks are often the most expensive when they trade at low price-earnings ratios.

The GuruFocus Value chart shows a stock trading considerably above its intrinsic value. 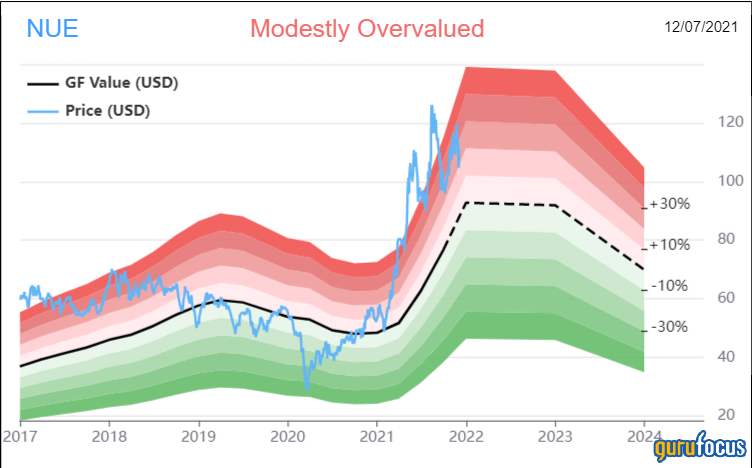 With a GF Value of $88.59, Nucor has a price-to-GF-Value ratio of 1.30. Shares would need to retreat 23% to reach the GF Value, earning the stock a rating of modestly overvalued.

Ecolab, McCormick and Nucor are three such names that meet the necessary requirements for membership. All three companies have at least 36 years of dividend growth.

Each company is a leader in its respective industry, which has allowed it to grow its dividend over a long period of time. Of the three discussed here, only McCormick trades below its GF Value, though Ecolab’s price-to-GF-Value ratio doesn’t appear to be stretched. Despite a strong dividend, Nucor is better left to those with a higher risk tolerance and knowledge of cyclical investing, though nearly five decades of dividend growth in a highly cyclical sector is noteworthy.