Investors starved for income in this low-rate environment might be tempted to reach for high-yielding securities. This could be a mistake, as a high yield could be a sign of trouble with the underlying company and could foreshadow a dividend cut.

That isn't always the case, though. In this article, we will look at three names offering dividend yields that are at least three times the average yield of the S&P 500 Index that appear to be very safe. As a bonus, each of these names is trading below both its long-term average valuation and its intrinsic value as calculated by the GuruFocus Value chart.

DOW, Financial), which came to be following the April 2019 split from parent company DowDuPont. Dow designs, manufactures and markets specialty chemicals, polymers and other related products to customers in such end markets as construction, consumer goods, energy and textiles. The company has a market capitalization of $40 billion and generates annual revenues of close to $39 billion.

Dow hasn’t raised its dividend since becoming an independent company, but the annualized distribution of $2.80 results in a yield of 5.1% today, which is almost four times the average yield of 1.3% for the market index.

Wall Street analysts expect that the company will earn $8.95 per share in 2021, giving Dow an expected dividend payout ratio of 31%.

Investors should be aware that the company does expect supply chain issues to be a headwind in 2022, which is one reason why analysts expect that next year’s earnings per share will fall to $6.32. The forward price-earnings ratio, however, remains low at just 8.7 using 2022 estimates.

The GuruFocus Value chart shows that Dow is undervalued relative to its intrinsic value. 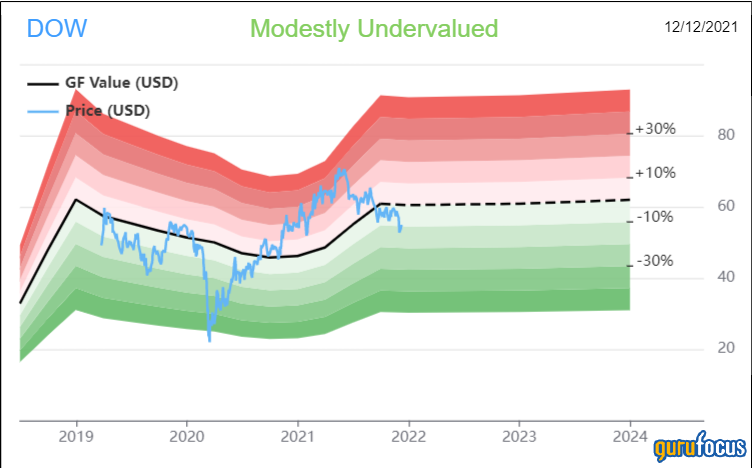 With a GF Value of $60.58, Dow has a price-to-GF-Value ratio of 0.90. Reaching the GF Value would result in a nearly 11% gain from the current price for shareholders. Factor in the dividend and total returns could be in the mid-teens range.

Next is Mercury General Corporation (

MCY, Financial), an insurance company that provides automotive, business, homeowners and renters insurance. More than two-third of premiums are for private passenger auto insurance, with California being the company’s primary region of operation. Mercury General is valued at $2.9 billion and has annual revenues of $3.6 billion.

Mercury General has a lengthy dividend growth streak of 33 years. The company last raised its dividend by 0.4% for the upcoming Dec. 30 payment date. This is a very small increase, but in-line with the dividend’s compound annual growth rate of 0.5% for the last decade, according to Value Line.

The company is expected to see earnings per share of $3.23 in 2021, leading to a projected payout ratio of 79%. This is elevated, but well off the 10-year average payout ratio of more than 100%. Given this historically high payout ratio, the dividend does appear safe at the moment, but dividend growth is likely to remain muted as it has been for a long period of time.

With shares trading at $52.41, Mercury General has a forward price-earnings ratio of 16.2. The stock’s valuation has varied greatly over the last decade, but has generally been in the low 20s at least. 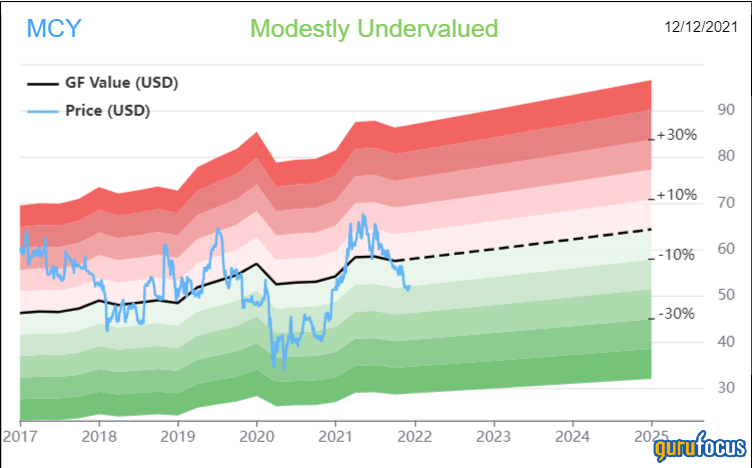 Mercury General has a GF Value of $57.98, giving the stock a price-to-GF-Value ratio of 0.90. Shares could return 10.6% if they were to reach the GF Value. The dividend yield could push total returns into the mid-double-digit range.

Last up is the Western Union Company (

WU, Financial). Western Union is the global leader in the area of domestic and international money transfers. The company has close to 510,000 agent locations across nearly every country in the world, with nearly two-thirds of revenue coming from international markets. Western Union is valued at $7.3 billion and had revenue of nearly $5 billion in 2020.

Western Union raised its dividend 4.4% for the Mar. 31 payment date. Shareholders should see the next dividend increase close to this payment date next year if the company keeps to its traditional schedule. The dividend has a compound annual growth rate 12.6% since 2011.

The company’s annualized dividend is 94 cents, resulting in a yield of 5.2%. Were Western Union to average this yield for the entire year, it would be the highest average yield in more than a decade.

While many high-yielding stocks can be a warning sign for the company or the dividend, Western Union’s dividend looks quite secure. The company is expected to earn $2.07 per share in 2021, which would place the payout ratio at 45%. This isn’t too far off of the 10-year average payout ratio of 38%.

Western Union closed the most recent trading session at $18.21. Therefore, the stock trades at 8.8 times earnings estimates for the year. Since 2011, the stock has averaged a price-earnings ratio of 11.5. Western Union looks inexpensive against its long-term average valuation.

The same is true when considering the GuruFocus Value chart. 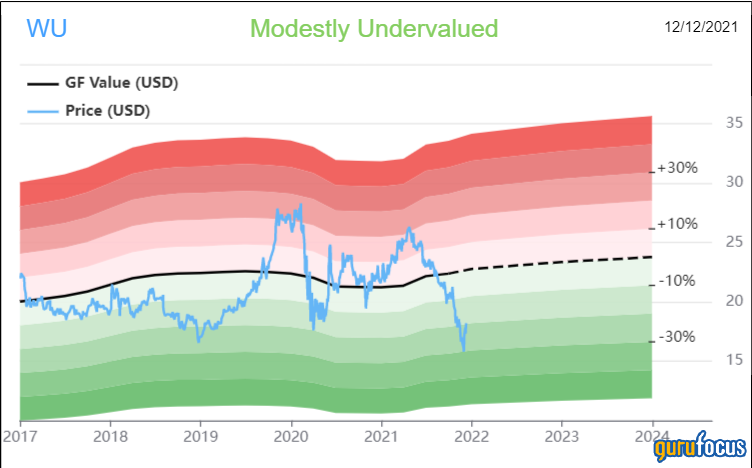 Western Union has a GF Value of $22.69, implying a price-to-GF-Value ratio of 0.80. Shareholders could see a 24.6% gain from the current price, which expands to nearly 30% when adding in the contribution from the stock’s dividend yield.

Investors can be hard-pressed to find safe sources of income in the current market. The S&P 500 Index offers an extremely low yield. Reaching for higher yields can be dangerous, especially if the investor is living off dividends in retirement.

That said, Dow, Mercury General and Western Union are three stocks offering triple the yield of the market index. All three dividends look to be reasonably healthy. Even better, each stock is undervalued against its own respective valuation and is trading at least 10% lower than its GF Value.

Dow, Mercury General and Western Union are all rated as modestly undervalued by GuruFocus. This suggests that all three could be attractive investments, providing sizeable gains and safe dividend income.