Bullish analyst comments about the potential for a Gilead Sciences Inc. (

GILD, Financial) drug may account for the jump in the company’s shares to a 52-week high of $73.34 this week. Newly unveiled data projects that the Gilead's CAR-T therapy Yescarta could bring in revenues of $1.5 billion over time, according to RBC Capital Markets analysts and Fierce Pharma.

The information from a recent study is likely to establish CAR-T therapies as the new standard of care in certain patients with aggressive B-cell lymphoma after one prior therapy.

CAR-T is a type of treatment in which a patient's T cells (a type of immune system cell) are changed in the laboratory so they will attack cancer cells, according to the National Cancer Institute. CAR-T cell therapy is used to treat certain blood cancers, and it is being studied in the treatment of other types of cancer.

Yescarta sales increased to $175 million in the third quarter of 2021, driven by continued demand in the U.S. and Europe.

RBC’s optimistic outlook followed detailed results at the American Society of Hematology annual meeting. They left no doubt that Yescarta cut the risk of disease progression, death, or the start of new therapy by more than 60% over the previous standard of care, which involved high-dose chemotherapy followed by stem cell transplant.

The RBC analysts think Yescarta could continue to be the “dominantly-used CAR-T, with Bristol-Myers Squibb Co.’s (

BMY, Financial) drug Breyanzi reserved for patients that are frailer but have more time to wait.” 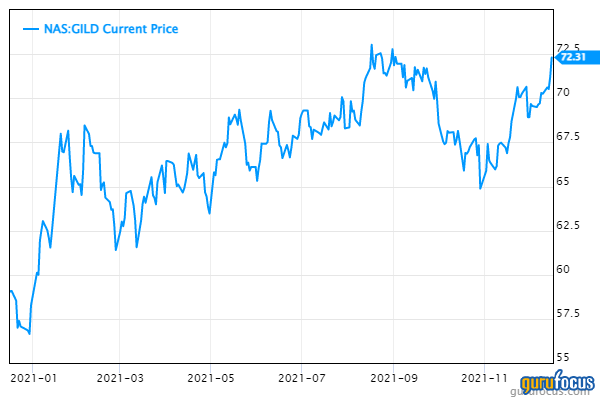 However, they cautioned that it’s likely to take some time before the Gilead treatment starts generating sales of more than $1 billion. They think Yescarta’s potential future adoption in second-line large B-cell lymphoma (LBCL) is likely to be “more steady rather than an inflection.”

That opinion was seconded by Christi Shaw, CEO of Gilead’s Kite Pharma. She estimates about 14,000 U.S. patients would be eligible for Yescarta in the second line, compared with 8,000 patients in its currently-approved third line.

“We don’t believe it’s going to be a flood of patients coming all at once,” Shaw said in a recent interview, pointing to the initial slow ramp for CAR-Ts when they were first introduced in 2018. To get ready for the potential expansion into earlier treatment, the company wants to make certain that patients and community physicians are aware of Yescarata as an option, she said.

Bristol’s Breyanzi also achieved outstanding results from its phase 3 study. The data from both companies could be “game-changing,” a world-renowned physician from a major cancer center told the RBC team.

The analysts expect applications of the drugs in second-line LBCL will face no regulatory issues and will lead to increased adoption post-approval.

Gilead stock seems headed in the right direction after being stagnant for the past five years. According to the GuruFocus Value chart, shares are trading slightly below their intrinsic value estimate, earning a fairly valued rating. They trade at a very digestible price-earnings ratio of under 13 and pay a healthy dividend of 3.93%. Gilead is rated between a buy and a hold on Wall Street, with a high target price of $100 and an average of about $77. 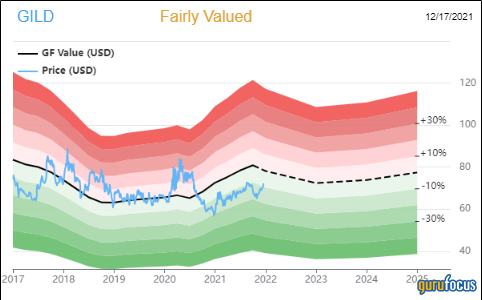