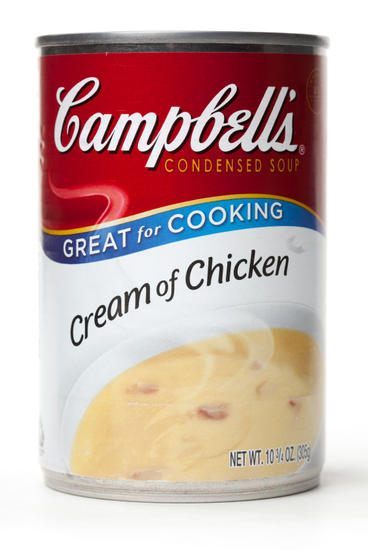 Consumer staples are often a favorite of dividend growth investors, as these companies tend to provide consistent growth even through a recessionary environment as consumers need these products for everyday life. Food companies in particular can prove to be solid investments as consumers still need to eat through all portions of the economic cycle.

At the same time, some investors underweight or avoid this sector because the growth isn’t there compared to, for example, the technology sector. However, many companies in this sector pay attractive dividend yields as a way to entice investors. In this article, we will look at two food stocks paying a generous dividend yield and offering the potential for double-digit total returns.

First up is Campbell Soup (

Campbell Soup is a global company, with operations in close to 120 countries around the world. While best known for its branded soup, the company has a strong selection of other popular brands. This includes V8, Prego, Pepperidge Farm, Gold Fish, SpaghettiOs and Swanson Broths. Campbell Soup occupies many isles of the grocery stores and holds the top spot in several categories.

The company has also maneuvered a portion of its portfolio to meet the challenges of changing consumer demands. Campbell Soup has a variety of products, such as popcorn, chips and veggie sticks, that contain less salt that peers in an effort to appeal to those aiming for a lower-sodium diet.

Campbell Soup fits the definition of a slow growth consumer staple company as earnings per share have a compound annual growth rate (CAGR) of a little more than 2% for the last decade.

This low growth has also meant little to no growth for the dividend over this time frame. In fact, the dividend has only increased three times in the last decade, including the 5.7% raise that shareholders received in early February of this year.

Still, shares yield 3.5%, vastly superior to the 1.25% yield of the S&P 500 Index. According to Value Line, the current dividend yield also compares favorably to the 10-year average yield of 2.9%.

The company has a healthy dividend payout ratio with the annualized dividend of $1.48 projected to consume just 53% of expected earnings per share for the year. Despite its inconsistent earnings and dividend growth, Campbell Soup has traditionally had a conservative payout ratio over the years, with the average payout ratio coming to 48% for the last 10 years.

Wall Street analysts believe the company will earn $2.80 per share in fiscal year 2022, which ends July 31, 2022. With the stock trading close to $42 at the moment, shares of Campbell Soup have a forward price-earnings ratio of 15. Shares have averaged a multiple of closer to 17 times earnings over the last decade, so shares seem to be cheap compared to the historical average valuation. 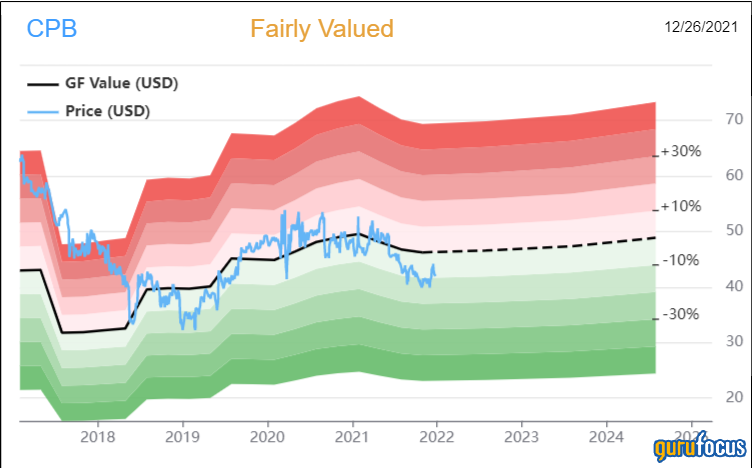 Campbell Soup has a GF Value of $46.30, giving the stock a price-to-GF-Value ratio of 0.91. Reaching the GF Value would mean a 10.2% return from the current price before even factoring in the dividend yield. Shares are rated as fairly valued by GuruFocus.

Next is Unilever PLC (

UL, Financial), which ranks amongst the largest consumer staples companies in the world. The U.K.-based company generates annual revenue of more than $26 billion and is valued at close to $136 billion.

Unilever isn’t a pureplay food stock in that it has an assortment of consumer staple items in its massive portfolio of more than 400 products. Close to 40% of annual sales do come from the food and drink category of the company’s portfolio, positioning Unilever as a very diverse company.

The company owns some of the world's most popular food brands, including Ben & Jerry’s and Breyers ice cream, Hellmann’s mayonnaise and Knorr side dishes. As a whole, Unilever owns nearly a third of the top 50 global consumer brands, with several of the company’s food items appearing on this list.

Earnings per share have a CAGR of 3.6% since 2011, but some of this low growth is due to currency fluctuations between the U.S. dollar and the Euro.

Dividend growth has been higher over this time frame at 4.5% annually. U.S. investors have seen their dividends grow for six consecutive years and in 10 out of the past 15 years. The dividend has a CAGR of 5.7% over the last five years as dividend growth has accelerated somewhat in the medium-term. Shareholders will receive 9.7% more dividends per share in 2021 then they saw in 2020, one of the highest year-over-year growth rates of this century.

The stock closed last week with a yield of 3.8%, which compares favorably to the 10-year average yield of 3.3%. The current yield is one of the highest seen in some time.

With an annualized dividend of $2.30 and expected earnings per share of $2.98 for the full fiscal year, Unilever has a projected payout ratio of 68%. This is an elevated payout ratio compared to Campbell Soup, but is nearly in-line with the stock’s 10-year average of 65%.

The stock trades hands at $52.82, resulting in a forward price-earnings ratio of 17.7 for shares of Unilever. The long-term average price-earnings ratio is almost 21. In fact, Unilever hasn’t averaged a multiple below 20 times earnings since 2014, so the stock looks inexpensive on a medium-term comparison.

The GuruFocus Value chart shows the stock to be trading at a discount to its intrinsic value. 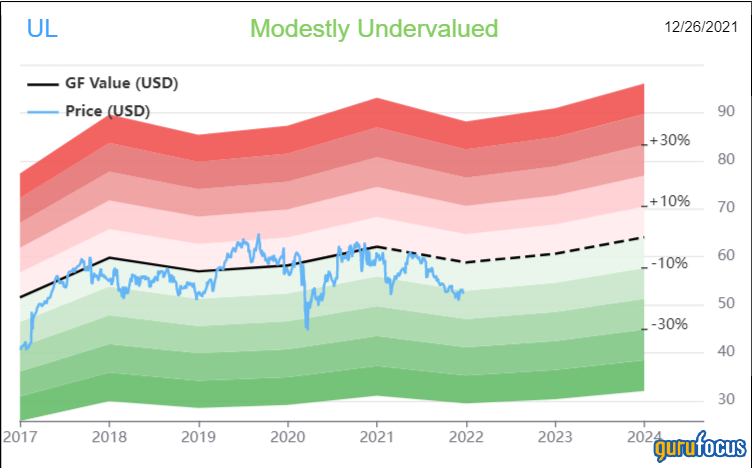 Unilever has a GF Value of $58.84, resulting in a price-to-GF-Value ratio of 0.90. Advancing to the GF Value would give shareholders an 11.4% gain from the most recent trading price. Add in the dividend yield and total returns could push into the mid-teens range. The stock is rated as modestly undervalued by GuruFocus.

Food stocks can provide investors with high levels of income as these companies produce consistent returns and can distribute high levels of dividends to shareholders. Campbell Soup and Unilever are two examples of stocks in this industry that offer very attractive yields. Earnings growth isn’t stellar for these two names, or the industry in general, but the dividend appears to be very safe for both companies.

At the same time, both stocks trade below their own historical price-earnings ratios and at a discount to their GF Values. They might not be the most attractive growth investment options in the market, but an investment in Campbell Soup or Unilever could fetch returns in the low to mid-double-digit range according to my analysis.