2 Energy Names for Growth and Income

The energy sector is often filled with high dividend yields, but this area of the economy can also offer attractive levels of growth. With the price of a barrel of oil approaching $80, most energy companies are likely to see strong results in the coming quarters after having a difficult time the past couple of years.

In fact, energy was already one of the best investments in 2021, with the iShares Global Energy ETF (

And yet, some names continue to trade below their GF Values. In this article, we will take a look at two such stocks that provide a high dividend yield and have the potential for double-digit share price returns based on their GF Values.

XOM, Financial), one of the largest energy companies in the world. The company is valued at $259 billion and generated revenue of $181.5 billion in 2020.

As a commodity company, Exxon Mobil is highly sensitive to the ups and downs of the price of oil. Last year, the company lost 33 cents per share as the Covid-19 pandemic greatly reduced the demand for energy products. This was down from $4.88 of earnings per share just two years before, in 2019.

On the plus side, the rebound in energy prices has allowed the company to see its fortunes turn. For example, the second and third quarters of 2021 saw revenue increase 108% and 60%, respectively, from the prior-year quarters. Earnings per share of $1.58 and $1.10 compared extremely favorably to a loss of 70 cents and a loss of 18 cents in the same periods of 2020.

As a result, Wall Street analysts expect that Exxon Mobil will earn $5.03 per share in 2021, which would be the company’s best showing since 2014. The company also announced that it would repurchase up to $10 billion worth of stock starting in 2022, providing evidence that Exxon Mobil’s leadership team expects a pickup in business.

The recovery in energy prices has also helped to ensure that the company’s dividend is safe. Exxon Mobil raised its dividend 1.1% for the Dec. 10 payment, ending what had been seven consecutive quarter at the same amount. Because of low growth recently, Exxon Mobil has a dividend compound annual growth rate (CAGR) of just 5.4% over the last 10 years. The company does have a dividend growth streak of 39 years.

The good news is that the dividend looks much safer today than it has in a long time. Shareholders received a total of $3.49 of dividends per share this year, implying a projected payout ratio of 69%. While still on the high side, this compares very well to the average payout ratio of more than 100% since 2016 and would be the lowest since 2015 if achieved.

With an annualized dividend of $3.52, shares of the company yield 5.8%. This is nearly five times the average yield of 1.24% for the S&P 500 Index and is also higher than the stock’s 10-year average yield of 3.8%. This would also be the second highest dividend yield in at least the last 15 years if averaged for an entire year.

Exxon Mobil is trading at 12.1 times expected earnings for 2021. The stock has had an average price-earnings ratio of close to 18 since 2011, but has typically traded in the low-to-mid teens under more normalized circumstances.

The stock looks undervalued according to the GuruFocus Value chart. 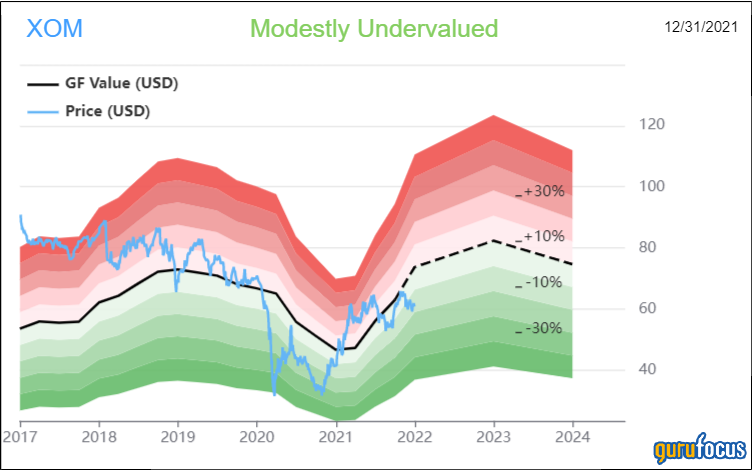 With the stock at $60.79 and a GF Value of $73.61, Exxon Mobil has a price-to-GF-Value ratio of 0.83. Reaching the GF Value level would mean a 21% gain in share price, with the dividend yield pushing total returns into the mid-20% range. Exxon Mobil is rated as modestly undervalued by GuruFocus.

The second name to consider is Marathon Petroleum Corporation (

MPC, Financial), which was once part of Marathon Oil Corporation (MRO), but was spun off in 2011. The company also has thousands of gas stations around the U.S. Marathon Petroleum is valued at $39 billion and has annual revenue of $75 billion.

Marathon Petroleum closed on its purchase of Andeavor Logistics in late 2018, giving the company a massive footprint with refiner facilities in the Midcontinent, Gulf Coast and West Coast regions of the U.S. As a result, the company is now the largest refiner in the country, with 16 refineries combining for a refining capacity of just over 3 million barrels per day.

MPLX, Financial), a master limited partnership that gathers, processes and transports natural gas and crude oil. MPLX’s pipeline network is difficult to replicate by competitors and is less reliant on energy prices due to its “toll booth" business model.

The increase in gas prices has been a significant tailwind to Marathon Petroleum’s business. The national average for a gallon of gasoline is close to $3.29, which compares to just $2.25 at the same time in 2020 thanks to a spike in demand following the reopening of the economy.

Like Exxon Mobil, Marathon Petroleum had a difficult 2020. Revenue dropped 55%, 44% and 42% over the final three quarters of 2020, respectively. However, the company has seen a recovery as revenue almost doubled for the last two quarters of 2021 compared to the same period of 2020. In fact, revenue is close to pre-pandemic levels already.

Marathon Petroleum’s dividend situation doesn’t appear to be as strong as Exxon Mobil's, at least at first glance. The company distributed dividends of $2.32 in 2021, but is expected to earn just $1.72 this year, equating to an unstainable payout ratio of 135%.

Shareholders should take comfort that analysts expect the company to see earnings per share of $3.68 in the new year. This is still lower than pre-pandemic levels, but does show that Marathon Petroleum is expected to see business improve in the new year. If the dividend were to be held constant in 2022, then the payout ratio would drop to 63% using estimates for the year. This would still be above the recent average, but would mean the dividend was likely safe from being reduced.

Marathon Petroleum yields 3.6% at the moment, higher than its 10-year average yield of 2.9% and almost three times what the market index is offering.

The stock closed the year's trading at 37 times this year's earnings estimates, but just 17 times 2022 forecasts. Marathon Petroleum has a five-year average price-earnings ratio of close to 14.

When it comes to its GF Value, though, the stock appears to offer solid return potential. 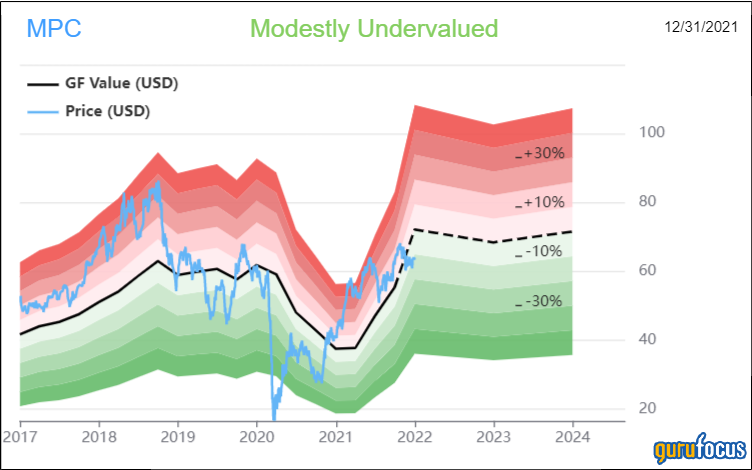 Marathon Petroleum is trading at $63.99. The stock has a GF Value of $72.20, giving shares a price-to-GF-Value ratio of 0.89. Marathon Petroleum could return 12.8% by reaching the GF Value. Add in the dividend yield and total returns could be in the mid-teens.

Energy was one of the best places to be last year as the world began to see recovery progress from the Covid-19 pandemic. Higher demand for energy products has resulted in an increase in price, which has helped companies see much improved results and provided some protection for dividends.

Exxon Mobil and Marathon Petroleum are two examples of companies whose dividends look much safer today than they did last year. The yields are several times that of the S&P 500 Index and above both companies’ long-term averages.

Even better, both stocks are undervalued against their GF Value, with the potential for at least mid-double-digit total returns. This suggests that investors looking for value and income from the energy sector could consider these two leading energy companies.